Here is the picture of the monster pike that Hampus Benjaminsson and friends Filip and Rasmus Nilsson pulled up this weekend. Bjässen grabbed early on Saturday morning, in a secret place in the Borås area. - When it started to rush, we understood that it must be really big. Crazy! tells Filip Nilsson. 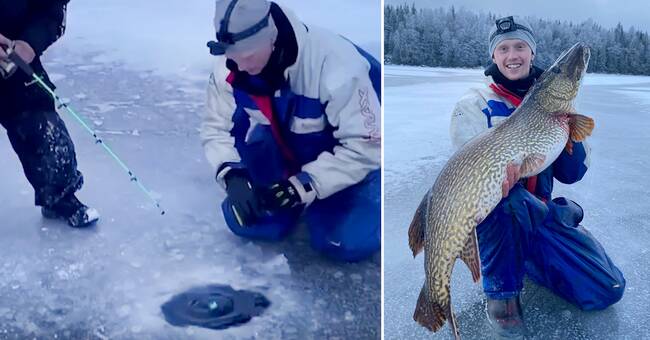 It should be said at once that this is not the largest pike caught in Sweden.

The record is just over 21 kilos.

But Boråskillarna Hampus, Filip and Rasmus have not pulled up anything similar before, especially not on ice fishing.

Five in eight on Saturday morning, they placed several rod holders and rods on the ice, put roaches on the fishing rods and then prepared to wait quite a long time for a pacifier.

But already seven minutes past eight they saw how the so-called rocker on the line stood up correctly.

- When you get a pacifier, it should flutter, but in this case it just stood.

So my brother went there to see if it was fish.

And that was it, of course, but we first thought it was one of five, six kilos because he hung on nicely in the beginning, says Filip.

But as soon as the fish began to rush, they realized that it was something bigger they had caught on the hook, even though they never dared to dream of seventeen kilos of pike.

- My brother pulled it up.

You help each other when it's such a big fish.

Hampus had to gently lift it out awake while I was filming.

So it was we together who got it up, says Filip.

He adds that you have to be extra careful not to damage the fish when it is this cold.

They measured and weighed it - and then carefully dropped it into the hole again so that it could swim on.

But why did you release it?

- We are afraid of the stock and want it to live on and become even bigger.

Then pike is not very good either, says Filip.

If the giant fish is allowed to grow for a few more years, it may be a Swedish record the next time they manage to pick it up.

A reason as good as something not to tell where the fishing place is ...