Shell ordered to pay compensation for oil spills in Nigeria

The sentence was handed down today. A victory achieved by the perseverance of 4 farmers 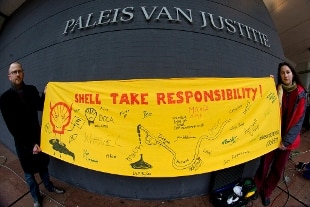 January 29, 2021 When they thought about starting the lawsuit, maybe they didn't believe it either.

However, they had seen the villages of Goi, Oruma and Ikot Ada Udo, in the Niger Delta region, taken away from oil.

The fields where they cultivated, the area where they had been fishing for 15 years.

So in 2008 they sued Shell, alongside them, the environmental organization Friends of the Earth.

During this long legal battle two of them died, but the others continued unabated.

The verdict concerns the losses that damaged the lands of Goi and Oruma, in the Niger Delta region.

The amount of the damage will be determined later, it has been added.

Prior to this verdict, a court of first instance had ruled that Shell should have paid compensation for a spill, but that the parent company could not be held liable by a Dutch court for the actions of its Nigerian subsidiary.

In 2015, however, the Hague Court of Appeal overturned that ruling and ruled in favor of Dutch jurisdiction on the case.

In 2008, when the cause of the 4 Nigerian farmers began, Amnesty International, with the Center for the Environment and Human Rights and Development, estimated a sum of one million dollars that Shell would have to pay to clean up the Ogoniland area, in the Niger delta

The oil pollution clean-up in the area is considered one of the largest and longest in the world.

Areas that did not appear to be polluted were compromised underground.

The infrastructures used for the exploitation of oil are still inadequate.