In 2020, the country's chemical accidents will be reduced by 26 year-on-year without major accidents

China News Service, January 29. Li Wanchun, Chief Engineer of the Emergency Management Department and Director of the Investigation and Statistics Department, said on the 29th that last year, the number of chemical accidents nationwide decreased by 26 and 98 people year-on-year, a decrease of 15.3% and 35%, respectively. No major accidents occurred. The accident has reversed the passive situatio 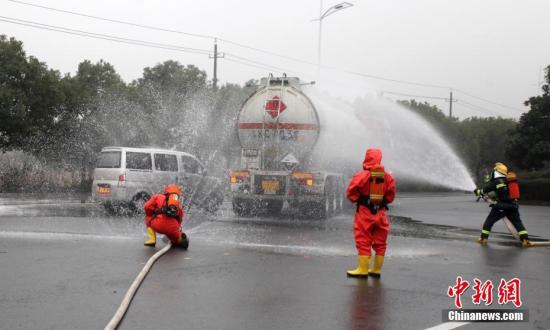 China News Service, January 29. Li Wanchun, Chief Engineer of the Emergency Management Department and Director of the Investigation and Statistics Department, said on the 29th that last year, the number of chemical accidents nationwide decreased by 26 and 98 people year-on-year, a decrease of 15.3% and 35%, respectively. No major accidents occurred. The accident has reversed the passive situation of more than 2 serious accidents every year for three consecutive years since 2017.

The Emergency Management Department held a press conference on the 29th. At the meeting, reporters asked questions. There have been many major accidents in the hazardous chemical industry in recent years, which have become the top priority of safety in production. What specific measures the Emergency Management Department has taken in this regard Measures?

What problems do the assessment reveal?

"my country is a major chemical country, with an output value accounting for 40% of the world's total. However, the number of small and medium-sized enterprises in my country is particularly large, accounting for 80% of the entire enterprise volume. These enterprises have a low level of intrinsic safety, especially in the high-speed growth belt for more than ten years. The coming risks and hidden dangers are superimposed together, and the concentrated exposure of hidden dangers has formed a systemic risk, which has attracted the great attention of the Party Central Committee and the State Council." Li Wanchun said.

Li Wanchun pointed out that the Ministry of Emergency Management evaluated 10 major accidents involving hazardous chemicals and summarized the problems. First, the structural contradictions of the current chemical companies are still prominent, and the proportion of small and medium-sized enterprises in the fine chemical industry is still high. The level of automation of enterprises is relatively low, and their security capabilities are also very fragile.

Second, the supervision of the entire chain of safe production in the field of hazardous chemicals needs to be strengthened, especially in the links of transportation, storage, and disposal. The gap in safety supervision is still relatively large, and the risk of accidents is also relatively large.

The third is that the main responsibility of enterprises is not fulfilled. Hazardous chemicals are a high-risk industry. The professional quality of the employees is not high, the safety management is weak, and the level of intrinsic safety is not high. Some companies even ignore the regulations and rush to human lives.

Li Wanchun pointed out that for the safety supervision of hazardous chemicals, four main measures have been taken:

One is to strengthen the top-level design.

Last year, the "Opinions on Comprehensively Strengthening the Work of Safe Production of Hazardous Chemicals" was issued for the first time in the name of the Office of the Central Committee and the Office of the State Council.

Last year, it also arranged a one-year special rectification of Jiangsu, especially the chemical industry, to help and guide Jiangsu to explore effective measures and better guide the country.

At the same time, the Ministry of Emergency Management has done a lot of work in strengthening the supervision and management of hazardous chemicals.

The Ministry of Emergency Management has established the First and Second Divisions of Dangerous Chemicals and increased its strength, and reforms are in place.

The second is to focus on the management and control of major risks.

At the same time, a "Special Controlled Hazardous Chemicals Catalog" was formulated for special types of hazardous chemicals. After the Beirut explosion, three consecutive rounds of special rectification of explosives such as ammonium nitrate were carried out, providing guidance services for 214 nitrification enterprises nationwide.

The third is to improve the level of intrinsic safety.

Last year, the Ministry of Emergency Management carried out the “three rectifications” of chemical parks, hazardous chemical companies, and small chemical industries. At present, 19 provincial governments have identified 352 chemical parks, and have also studied and formulated a classified rectification catalog and a catalog of obsolete technical equipment , Organize and carry out cracking down on illegal and illegal small chemicals.

At the same time, four rounds of guidance services were carried out for 53 key hazardous chemical counties, and the radiation drove 261 key provincial counties across the country.

The fourth is to improve basic support capabilities.

Li Wanchun introduced that, in general, the above measures have achieved some staged results. Last year, the national chemical accidents decreased by 26 and 98 people year-on-year, down by 15.3% and 35%, respectively. There were no major accidents, which reversed 2017. In the past three consecutive years, there have been more than two major accidents in a passive situation each year.

"Although some results have been achieved, we should see that hazardous chemicals, especially the chemical industry, still have risks and hidden dangers. For example, the total number of accidents rose year-on-year last year, especially the Ministry of Emergency Management deducted the major accidents of the previous year. The total amount will increase in the future, and the major accidents last year also increased. Therefore, the rectification and upgrading work has a long way to go, and the next step is to continue to strengthen the relevant work." Li Wanchun said.