In Annecy, the young man, suspected of having killed his stepfather, was imprisoned

The victim's wife was injured with an ax on the family farm near Annecy, but her life is not in danger 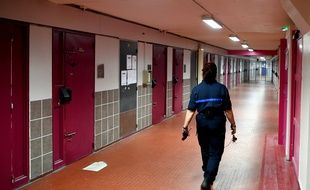 Illustrative photo of a prison guard at the Grenoble-Varces remand center, here in 2018. -

The 19-year-old young man, suspected of having killed his girlfriend's father and of having also injured his mother, was indicted and imprisoned, the Annecy (Haute-Savoie) prosecutor's office said on Tuesday.

The boy was arrested Sunday and taken into custody.

Then presented Monday evening to an examining magistrate who indicted him for "assassination, attempted murder and aggravated violence".

"He did not speak," said Véronique Denizot, prosecutor of the Republic of Annecy.

The wife of the victim injured with an ax

The facts took place on Saturday evening in Pringy, north of Annecy, shortly before the young man's companion alerted the gendarmerie by claiming that her boyfriend had killed her father and seriously injured her mother on the family farm. .

The 22-year-old's call resulted in a large number of gendarmes being deployed around the house, from which she and her mother had fled.

On the spot, the soldiers discovered the body of the victim, aged 64, "who died following one or more shots, and bearing other traces of violence", also indicated the prosecution.

The mother of the young woman, 60, also bore traces of "very serious injuries", including "ax blows".

She was taken care of at the hospital without her life-threatening prognosis.

Both were prescribed a five-day ITT (temporary work interruption).

The father of the suspect tried for murder in 2010

According to the gendarmerie, the drama took place "against a background of intra-family violence", but these circumstances remain to be clarified by the investigation, entrusted to the research brigade of the Annecy gendarmerie.

"It seems that there was a community of life and that the young man was working on the exploitation of parents," said Véronique Denizot.

The couple was struggling and the young woman wanted to break up.

She reportedly received text messages "with death threats" from her companion just before the tragedy.

According to the prosecution, the young man, whose father was tried in 2010 at the assizes for killing his stepfather, was known under the protection of children.

“In this case, the question that seems to arise is that of the criminal responsibility of this young man.

It will be for an expert to judge, ”said Véronique Denizot.

Annecy: The 18-year-old suspect recognizes the shots on his murdered stepfather

Annecy: 18-year-old man suspected of killing his girlfriend's father and injuring his mother