99.7 million cases worldwide. Mexico over 150 thousand deaths, declining infections in the US 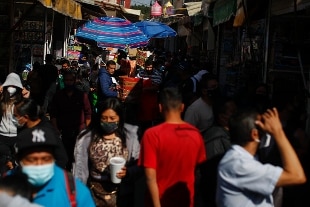 is confirmed as the country that has reported the highest number of infections.

At least 1,792 new deaths and 154,917 new infections have been reported in the United States within 24 hours since the New York Times database was last detected.

In the last week, 172,321 infections per day occurred on average, a decrease of 31% compared to the average of the previous two weeks.

The reports of new cases - the NYT always notes - have decreased by more than 30% in the last two weeks, but the limited availability of vaccines and the spread of new variants make it unclear whether this progress will last.

The interim death toll far exceeds the lower limit of the White House's initial estimates, which at best predicted between 100,000 and 240,000 deaths from the pandemic.

The new president of the United States, Joe Biden, has predicted that there will be more than half a million deaths in February.

There are over 150 thousand deaths from the coronavirus in Mexico, which thus becomes the fourth country in the world to exceed this threshold, after the United States, Brazil and India.

According to the Ministry of Health of Mexico City, the victims are 150,273, with a record number of 1,803 deaths recorded in the last 24 hours.

One victim, the second after the one two weeks ago, and 139 new cases.

These are the figures of the coronavirus bulletin in China, where 110 of the registered infections are of local transmission, 41 of which asymptomatic, and have been identified in the provinces of Heilongjiang, Jilin and Hebei, as well as in Beijing and Shanghai (2 in each of the two cities).

In total, 89,197 cases and 4,636 deaths have been recorded in China since the start of the pandemic a year ago.

Thailand has recorded 959 new cases of coronavirus in the last 24 hours, equal to the highest daily level since the beginning of the pandemic: the health authorities of the country have made it known, according to the CNN.

The new data brings the total toll of infections to 14,646, including 75 deaths.

Even Argentina is not yet free from the grip of the new coronavirus.