Here it is now: the first factory-built all-electric car with a Volvo brand on the bow. The IS test drive revealed that the XC40 Recharge is quite an energy glutton in the winter. 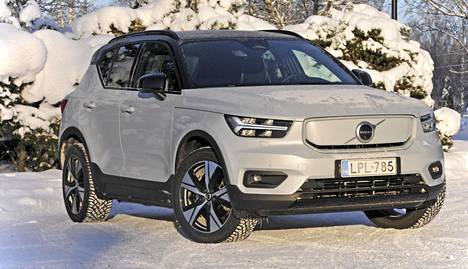 Once again, the history of the electric car can be considered relatively short, as Volvo began its development work with the electric power line in reality about ten years ago, when the strategic cooperation between Volvo and Siemens began in August 2011.

Seven years is a very common life cycle for one car generation.

Volvo has thus succeeded in launching a new electric car, the XC40 Recharge, in a relatively short time.

The achievement is a good illustration of Volvo's general direction: in the 2020s, petrol, and diesel in particular, will slowly give way to electrification.

Volvo needs to be mentally prepared for this.

Of course there is no exhaust, and the bow mask is closed. Photo: Harry Kuurio

Cheap car XC40 Recharge is not.

There is still a significant mark-up in the prices of electric cars compared to similar internal combustion engine models.

In the case of Volvo, well over 60,000 euros have been drawn on the price tag.

The XC40 Recharge P8 AWD is by far the most expensive XC40 model in Volvo's assortment, although there is no car tax in the price as a name.

the average car buyer will probably have no dreams of buying the XC40 Recharge, at least as new.

Volvo knows how to design and make high-quality interiors that look good.

Ergonomics are successful and the standard equipment is quite comprehensive. Photo: Harry Kuurio

On the other hand, a big bundle of money also gives you a very convincing package, at least on paper.

Volvo has clearly chosen to emphasize car power and performance as its strategy, although it is not particularly in line with the eco-theme often associated with electric cars.

The car has more than 400 horsepower, a remarkably plush 660 Newton meters of torque and four-wheel drive.

The speed of a hundred with these fins is reached in 4.9 seconds.

However, top speed is limited to Volvo's current reading of 180 km / h, so even lower peak power would certainly have been enough.

The car's consumption in winter driving was at an alarmingly high level: with such performance, the business trips are relatively short in the frost. Photo: Harry Kuurio

It is affected, for example, by the car's high unladen weight, almost 2.2 tonnes.

even in this case, precisely in relation to the size of the car, there is a lot of mass.

Jaguar's electric car I-Pace, for example, which weighs practically the same amount but is at least one size larger, is a good point of comparison.

The XC40 Recharge would lose weight right out of the box.

During the test drive, the towing car also had to be used when a data transfer problem occurred during charging, and the car did not receive power at all. Photo: Harry Kuurio

The bang frost that hit the test drive period provided a great opportunity to test the winter features of the XC40 Recharge.

One frequently asked question is, how much do electric car batteries clot in decent frosts?

On the first night of the test drive, the frost was a little over 20 degrees, even in southern Finland.

Volvo was left to paint for just over 12 hours.

In the evening, the battery charge level was 11 percent, but in the morning after a good freeze, the reading was exactly the same.

So no effect whatsoever.

The interface in the XC40 Recharge is Android-based, and its usability is easier to control than the previous version.Photo: Harry Kuurio

On the second night, the frost had already intensified to -28 degrees.

This time, the car already had to be charged with a slow charge, meaning the car was in a hurry overnight.

The frost did not affect the charge anyway, but made from a standard single-stage suko socket, the charging rate slowed down quite sticky: in nine hours, only a third of the battery capacity was transferred in severe frost - as if driving a petrol station to a petrol station and refueling.

The buyer of an electric Volvo can strongly recommend the purchase of an 11 kW wallbox charger, which charges the battery from zero to full overnight, even in frost.

The XC40 Recharge's maximum possible charging power is as much as 150 kW, which means that the fast charging time from 10 to 80 percent will be close to 40 minutes - as long as such stations are only available in Finland comprehensively.

Unfortunately, we were not able to test the quick charge during the test drive, as the new Volvo was unexpectedly hit by a fault that totally paralyzed the charge after three days: the communication with the car's external charger was lost and the car refused to accept it with either slow or fast charging.

The car was moved by a tow truck for repair.

This was most obviously a single individual defect, but it showed that even electric cars are not immune to defects.

In addition to the 413-liter boot in the rear, there is a small 31-liter extra in the front - for business cables, for example. Photo: Harry Kuurio

Like Volvo, the car's steering feel is neutral, calm and stable, even slightly slower.

The Electric XC40 is a quiet car.

Driving is easy, and the resources really make you feel like yourself.

In slippery conditions, the rear axle gives the car so much “run” that the driver can even play with the XC40’s muscles if they wish.

Volvo's e-pedal, on the other hand, is a bit angular in nature, even if you use the accelerator pedal.

Fortunately, the feature can be turned off via the user interface, allowing the car to roll much more freely when the pedal is raised.

A worrying feature in winter driving was energy consumption, as it settled around as much as 37 kWh in mixed basic driving in the cold.

The remarkably ugly reading is about 50 percent higher than the official WLTP reading.

At the same time, it means that the actual operating distance of a car on a single charge can shrink to only about 200 kilometers in winter conditions - that is, half of what is measured.