On the first day of the trial in Leipzig, the defendant KSK soldier confessed to having buried weapons and ammunition in his garden. His reasoning is surprising: He claimed that he wanted to avert damage to his troops. 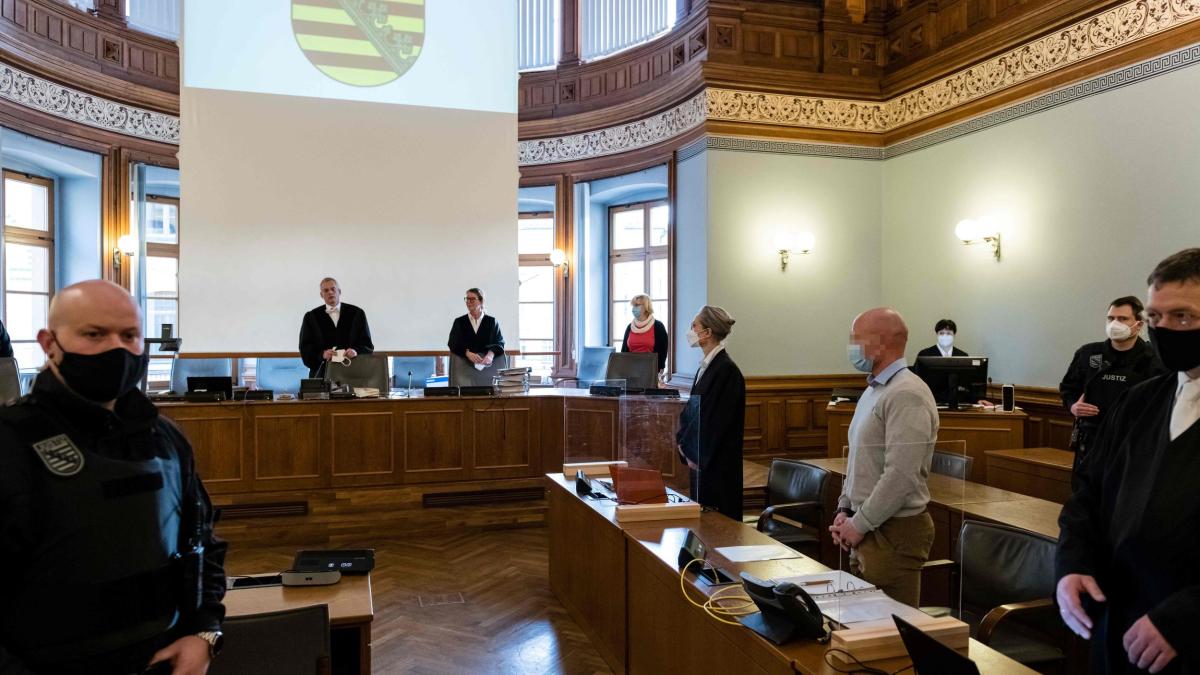 on Friday morning in room 115 of the regional court in Leipzig.

Only the watch on his wrist could tell at first glance who the man had really been for decades: one of the most experienced soldiers of the KSK's special forces.

Served since 2001 and - like every German soldier - should actually serve the liberal values ​​and democracy of the country.

The hall, however, entered Sch.

this morning as a defendant: Because investigators had secured a comprehensive weapon hiding place on his private property - thousands of rounds of ammunition, several kilograms of explosives and various weapons.

Even a Kalashnikov had been found in his garden in the ground, much in the depot was wrapped in foil and tape or covered with Aldi brochures.

In the bedroom, next to the bed, Sch was lying.

a loaded magazine, a fired bazooka in the attic.

There were also knives and a crossbow scattered across the property, and a baton in his room in the barracks.

WELT had reported in detail on the soldier's arrest last May, the weapons finds and investigations by several security and law enforcement agencies.

At the beginning of the trial, the representative of the Dresden Public Prosecutor's Office first read the detailed indictment.

because of several violations of weapons and explosives laws, but above all because of the violation of the War Weapons Control Act.

In the opinion of the General Prosecutor's Office, illegally found ammunition and projectile types clearly violate this, especially the Kalashnikov.

This was still able to fire, and at least some of the shots that were also shot at Sch.

The associated ammunition found could be successfully fired during ballistic investigations as part of the investigation.

This will still be important for the criminal process: The defenders of the KSK soldier will probably argue that the condition of the weapon was very bad and that the weapon was therefore less dangerous.

That the 45-year-old sergeant major had no license for weapons and ammunition should have been clear to him regardless.

After all, he also knew the legal way and also owned an approved gun safe.

Nothing fits the high standards of the Bundeswehr

And yet the points of the indictment weigh heavily - none of them fit the high demands of the Bundeswehr and even less the elitist self-image of the KSK special forces association: It is about explosive substances and alleged war weapons that are illegally in the hands of Sch.

He also had tracer ammunition and double core projectiles.

After the extent had to be clear to the last person in the courtroom, the defense announced a surprising statement from their client: Philipp Sch made his first statement.

He read his explanation from a piece of paper.

He confessed to having laid out the weapon stash.

He regretted that he had involved his son.

He did not know what was buried.

What followed is astonishing for a variety of reasons and will likely be read a lot in the next few days by the Bundeswehr and defense politicians.

On the one hand, KSK soldier Sch .: The KSK repeatedly lacked material for official exercises.

That is why, whenever there were leftovers, he collected them for training purposes, initially in his office of the 2nd KSK operations company.

In fact, the shortage of materials in the Bundeswehr has been known for years.

But now made this his own and tried to explain his own actions with the “shortage economy of the Bundeswehr” - in the courtroom the credibility of all of this was definitely doubted.

Sch.'s suggestion that this procedure, which he himself described as pragmatic, could have been in the interests of the military leadership, was equally untrustworthy.

After all, the KSK wanted exercises that were as realistic as possible, and how such goals were achieved, said Sch., Was of secondary importance at the KSK.

And then, explained Sch., Something else would have motivated him: When the MAD started against a Sch. From spring 2017 on suspicion of right-wing extremism.

determined to bring the accumulated weapons material to his private property in Saxony.

In fact, however, he undermined the MAD's educational work, which is supposed to expose enemies of the state and extremists for the benefit of the Bundeswehr.

That the defense minister had that 2nd operational company disbanded last summer and that the KSK as a whole since the demolition master Sch.

at the end of the declaration to forgive his mistakes and "carelessness", as he put it.

He does not answer any further questions for the time being.

The MAD also had Sch.

checked himself for several years because of his own, allegedly right-wing extremist views.

Here, too, the start of the process afforded deep insights: Dozens of Nazi magazines (“Der Freiwillige”) and an SS songbook were found in the soldier's house, as well as clothing typical of the scene and a pool of relevant postcards: “We thank our Führer” or “Nuremberg - The city of the Nazi party rallies ”was written on it.

The real motivation behind the hidden weapons depot must now be further illuminated in the process; there are no indications of terrorist intentions.

A verdict is expected in March.

is ever allowed to enter a barracks again as a soldier is more unclear than ever.