They are all fighting for the Beijing Winter Olympics

They are of different ages From all walks of life Life is calm but Beijing 2022 Winter Olympics Let ordinary people have huge energy Struggle on the front line of preparations for the Winter Olympics   "Everyone is working hard to host a successful Winter Olympic Games. The athletes are training hard. The construction unit, builders, and support team are working hard, and they have successf 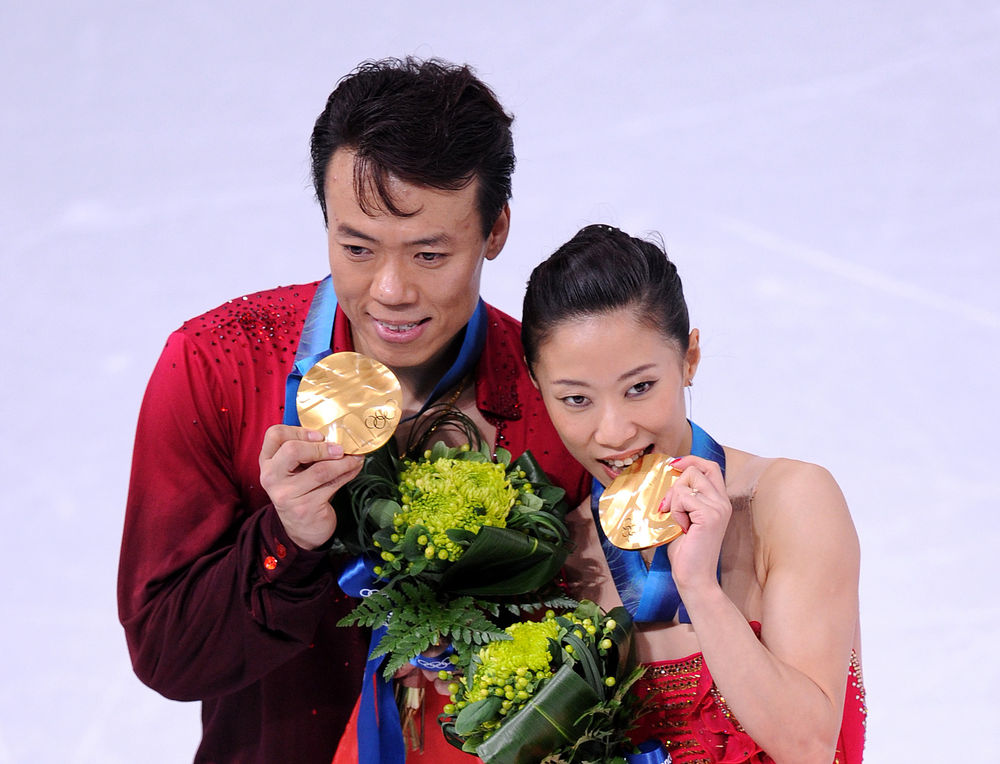 They are of different ages

From all walks of life

Struggle on the front line of preparations for the Winter Olympics

"Everyone is working hard to host a successful Winter Olympic Games. The athletes are training hard. The construction unit, builders, and support team are working hard, and they have successfully built a group of world-class quality projects. Everyone’s spirit of struggle and dedication Exciting.” General Secretary Xi Jinping said when inspecting the preparations for the Beijing Winter Olympics and Paralympics.

In the Winter Olympics, he was the brightest star; after retiring, he devoted himself to coaching.

On January 18, 2021, General Secretary Xi Jinping came to Beijing Capital Gymnasium to learn about the construction of sports venues and athletes' preparations for competition.

He introduced the Chinese figure skating team to the general secretary.

On January 18, 2021, Xi Jinping visited the Capital Gymnasium in Haidian District, Beijing, to learn about the construction of sports venues and athletes' preparations for competitions, and visit and sympathize with athletes and coaches.

"The General Secretary has repeatedly learned about our preparation results and cared about the training and living conditions of the ice and snow athletes. I deeply feel the general secretary's cordial care and ardent expectations for the ice and snow athletes." 47-year-old Zhao Hongbo said, "This is our continuation. The best encouragement and support on the road to the 2022 Beijing Winter Olympics. While I feel honored, I also feel that the mission is on my shoulders and the responsibility is great. We need to take every step of the preparations for the war."

On the same day, the 6 main players in the team conducted a collective training report.

Zhao Hongbo revealed that the training report soundtrack is "My Motherland". The main players of the national team have shown the "housekeeping skills" of winter training in just 3 minutes and 39 seconds. Some movements have reached "Olympic difficulty".

On January 18, 2021, Xi Jinping took a group photo with athletes and coaches during the investigation and investigation of the Capital Gymnasium in Haidian District, Beijing.

With the encouragement of the general secretary, come and hear what the Chinese figure skating team members say?

Peng Cheng, a pair skater who participated in the training report, said: "We have added the more difficult throws and lifts in the pair skating action, just like participating in a major competition, hoping to show the best and most perfect self. "

They said: "Because our ice dance project has been training abroad all year round, this is the first time we have met the general secretary. In the training report, we worked very hard to present the best training state. We know that the general secretary has always been very Paying attention to our preparation and training situation, for us training in a foreign country, this is a very big incentive."

The women's singles skater Chen Hongyi, who is very popular among ice fans, is a girl from Beijing. She also participated in the report performance on the 18th.

She said: "As a Beijing girl, I hope that through hard training, I can stand on the stage of the Winter Olympics and use my best performance to win glory for my motherland and make my hometown proud of me."

On the 19th, when General Secretary Xi Jinping inspected the National Ski Jumping Center in Zhangjiakou, Hebei, Liu Yu, the current dean of the Shanghai Institute of Sport Science, was leading a 7-person team in the ski jumping area to perform 3D motion capture and collection based on the athletes’ movements. analysis.

"We are honored to be able to make our best efforts for the'Technology Winter Olympics' and improve athletes' performance." Liu Yu said.

61-year-old Liu Yu is a native of Zhangjiakou and loves skiing outside of work.

Working for the Winter Olympics in his hometown, he felt that his dream was realized.

He said: "In fact, our southern universities have not many opportunities to study ice and snow sports. I have been waiting and looking for such opportunities. I am very fortunate to be able to undertake the'Science and Technology Winter Olympics' key special project'Research on the key technology of winter sports athletes' skill optimization' It’s a wonderful fate to do projects in my hometown."

On January 4th, the team first arrived at the National Ski Jumping Center, and the cold wave gave the researchers from the south a "dismissal".

After everyone's work, the first thing is to go out together to buy thick cotton pants.

With the "blessing" of thick cotton pants, the team works outdoors every day.

The data they collect can provide real-time feedback of the three-dimensional action information at the time of launch after the athletes finish jumping, and assist the coaches in optimizing the training plan.

After the researchers collected the data outdoors, they hurried into the simple cabin next to them to get warm while the athletes were resting.

Below, let's take a look at the daily work that Liu Yu and his team are proud of and hardworking for!

Struggle means not only gain, but also growth.

The 9-year-old child is now a first-year student in Xishan School of the High School Attached to the National People's University.

The child in the photo who "shouldered and saluted" with Grandpa Xi is Guan Zizhao.

At that time, General Secretary Xi Jinping bent down and met Guan Zizhao.

"Shoulder bump" is a way for ice hockey players to greet each other.

"Grandpa Xi encouraged us to study hard at the time, and now I have grown taller and stronger, and I have achieved many good results." Guan Zizhao wanted to report his growth to Grandpa Xi.

"Grandpa Xi encourages us to practice ice hockey. Now whenever we get results, I always want to share and report with Grandpa Xi. At the Beijing Winter Olympics, I want to be a volunteer and introduce ice hockey to everyone." Guan Zizhao said.

At the National Snowmobile Sled Center in Yanqing, 25-year-old Tao Xin is an assistant engineer. He signed up to join the project after graduating from university, and has been fighting with 77 project managers and more than 2,400 construction workers for more than three years. , A track with a total length of about 1.9 kilometers and a vertical drop of more than 120 meters has been built, with a unique 360-degree roundabout curve in the world.

This is the National Snowmobile Sled Center (UAV photo) taken on January 19, 2021.

In 2019, General Secretary Xi Jinping connected the venue builders in the Yanqing competition area via video and gave them New Year greetings. Tao Xin, who was responsible for construction safety, was on the scene.

He recalled: "The work had just started for more than a year, and the conditions were very difficult. The cordial condolences from the General Secretary gave us great encouragement and made us more vigorous in the future construction. Roll up our sleeves and work hard!"

In the following two years, Tao Xin and his friends steadfastly "rolled up their sleeves and worked hard."

Especially last year, they overcome the impact of the new crown pneumonia epidemic. After regrouping from all directions, the workers worked overtime to catch up with the construction period. They completed the site certification on November 1, 2020, and built the first and only snowmobile in China that meets the Olympic standards. The bobsled track ensures that the National Snow Sled and Sled Center has the conditions for the race.

The ice maker is maintaining the ice

On January 18, 2021, General Secretary Xi Jinping came to the National Snowmobile and Sled Center for investigation and research, and visited the operation support team and representatives of the builders. Tao Xin met the General Secretary on the scene for the first time.

He said excitedly: "The General Secretary's visit this time is affirmation of our construction. I will continue to stay as a member of the operation team until the end of the Winter Olympics. I will continue to work with all my heart and my friends. Let's participate in history and create history together!"

32-year-old Liu Xinrui is a native of Beijing. In the second year after the successful bid for the Beijing Winter Olympics, she came to Zhangjiakou Chongli for the first time to ski. She had barely touched snow before for 30 days and felt that she was "in the pit". Up.

Later, she gave up her job in Internet operations in Beijing to run her own ski club in Chongli.

Liu Xinrui said that Chongli changes every snow season or even every month.

Once, ice and snow sports did not leave Shanhaiguan.

Nowadays, by holding a Winter Olympics to light the torch of ice and snow sports, ice and snow sports are expanding in the south, west and east, forming a new pattern in which the southeast and northwest echo each other, the winter and summer have their own characteristics, and the ice and snow are fully blooming.

A splendid, extraordinary and outstanding Olympic event will surely drive more people to the ice rink, into the ice and snow, promote the building of a sports power, and bring more sense of gain to the masses.

On the long journey of preparing for the Beijing Winter Olympics

Let the magnificent picture of the Beijing Winter Olympics

From "freehand painting" to "meticulous painting"

Looking forward to the 2022 Winter Olympics

We must continue to struggle and move forward courageously

From vision to reality

Jointly produced by the Ministry of Sports of Xinhua News Agency