The Commander-in-Chief of Dubai Police, Lieutenant General Abdullah Khalifa Al-Marri, accompanied by the editor-in-chief of the Emirates today, honored Sami Al Riyami, a member of the Dubai Police Advisory Council for Community Service, and in the presence of the Secretary General of the Hamdan Bin Mohammed Bin Rashid International Award for Photography, Ali bin Thalith, and a number of executive leaders in 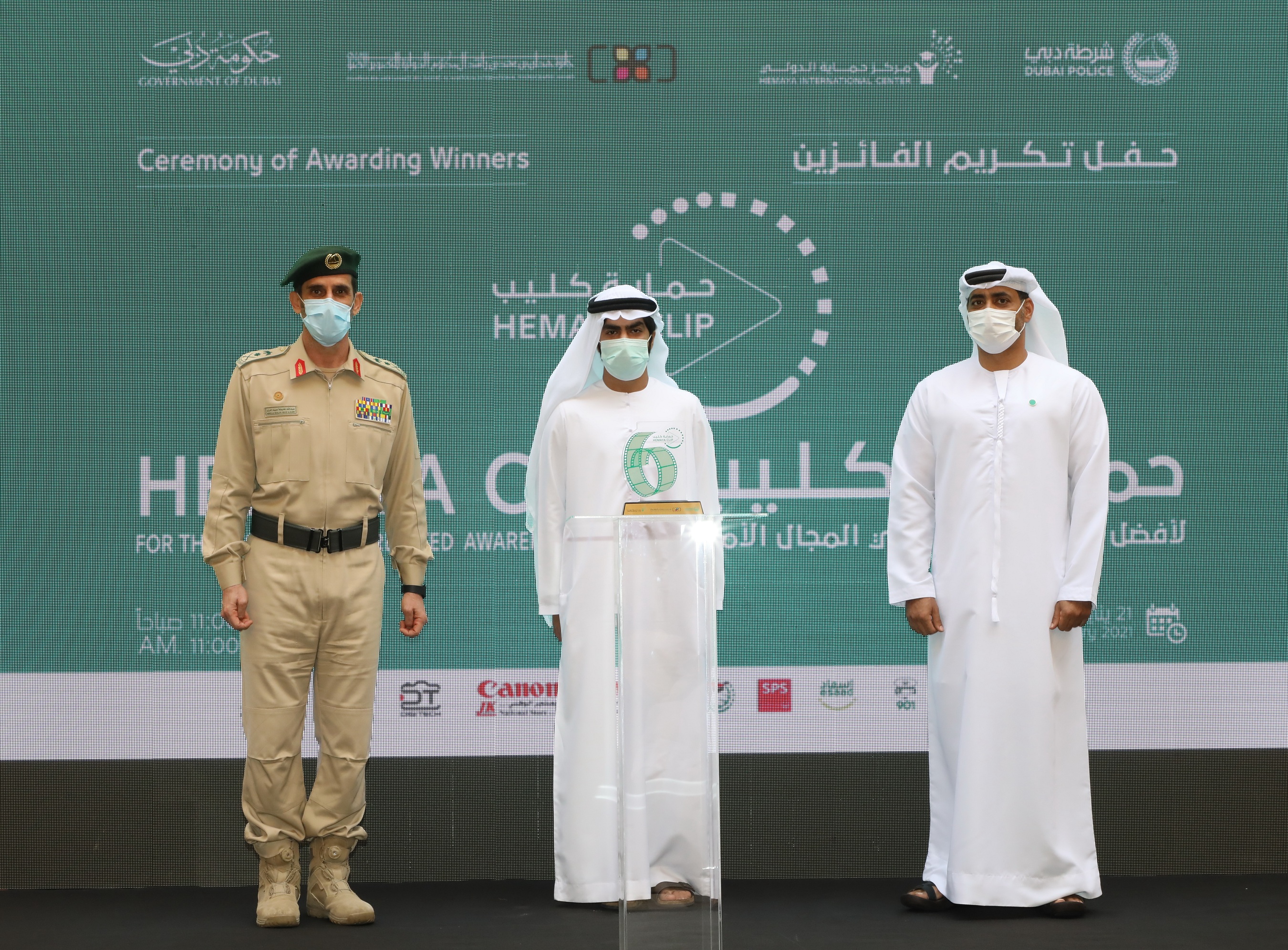 The Commander-in-Chief of Dubai Police, Lieutenant General Abdullah Khalifa Al-Marri, accompanied by the editor-in-chief of the Emirates today, honored Sami Al Riyami, a member of the Dubai Police Advisory Council for Community Service, and in the presence of the Secretary-General of the Hamdan Bin Mohammed Bin Rashid International Award for Photography, Ali bin Thalith, and a number of executive leaders in the field of media and television production The filmmaker, and senior officers of the Dubai Police General Headquarters, at Naif Police Station, 11 students who won the "Hemaya Clip" award, excelled in producing awareness clips about the dangers of drugs and psychotropic substances in 60 seconds, within four competitive axes designed by the Hemaya International Center at the General Administration for Drug Control in Dubai Police, and it included awareness about the misuse of psychiatric drugs, the role of the family in preventing drugs, how to avoid blackmail, treat electronic bullying, and prevent Internet addiction. The Commander-in-Chief of Dubai Police also honored 25 media professionals who competed in "Media Protection" to create media messages Effective and aimed at enhancing security and community awareness about the harmful effects of “toxins”.

The ceremony of announcing the results of the “Hemaya Clip” and “Hemaya Media” awards, which was organized by the Hemaya International Center at the General Department for Drug Control of the Dubai Police General Headquarters, also witnessed the honoring of the jury members for the “Hemaya Clip” award, and a number of partners, collaborators, and technical and technical supporters, in the presence of Executive Director of the TV and Radio Sector at Dubai Media Corporation Ahmed Saeed Al Mansoori, Secretary General of the Dubai Sports Council Saeed Mohammed Hareb, CEO of the Executive Center of the Hamdan Bin Mohammed Center for the Revival of Heritage, Member of the Dubai Police Advisory Council for Community Service Abdullah Hamdan Bin Dalmouk and Assistant Commander The General for Criminal Investigation Affairs in Dubai Police, Major General Khalil Ibrahim Al Mansoori, and Assistant Commander-in-Chief for Administration Affairs in Dubai Police, Major General Dr. Al-Sallal Saeed bin Huwaidi Al Falasi.

The Director of the General Department for Narcotics Control at the General Command of Dubai Police, Brigadier Eid Muhammad Thani Hareb, said that the "Protection Clip" award was launched with the support of Lieutenant General Abdullah Khalifa Al-Marri, and in cooperation with the Hamdan bin Mohammed bin Rashid Al Maktoum International Award for Photography, and a number of partners, to open Direct communication channels with university students of all nationalities, and to allow them to contribute to shaping the future of drug awareness, reflecting the great openness of Hemaya International Center and its great confidence in youth visions, and its keenness to empower creative talents who are able to employ the tools, energies, and technical and technical expertise of the modern era to play a pioneering role In developing the security awareness process about the dangers of addiction, and we are proud of all the students who fought in the midst of this challenge and formed a diverse and unique youth movement based on mature luminous thought, its language of awareness, and its goal is to enhance safety and security, and we are also proud of the media institutions that do their utmost to raise community awareness about Drug dangers.

The Director of the International Hemaya Center, Colonel Abdullah Al-Khayyat, said: The total number of participants in the "protection clip" amounted to about 1040 participants from more than 50 nationalities, and the technical conditions applied to 79 videos, to be later excluded 15 works belonging to people who are not from the target group, and the transfer of 64 A video for the evaluation stage, and finally only 11 jobs were nominated to compete for the final stage, then the best educational videos were chosen to win the 100,000 dirham prize, and to also win the opportunity to join the Dubai Police program aimed at adopting and supporting young talents and opening the doors of training opportunities for them to gain experience and polish talents, This is in a way that enhances the efforts of Dubai Police in communicating with the community and spreading positive spirit among all its members.

Within the "Hemaya Media" award, which amounted to 60,000 dirhams, Muhammad Fouda from Al-Emarat Al-Youm newspaper won the first place in the category for the best press coverage in the Arabic language, while the second place went to Sumiya Saad from Al-Khaleej newspaper.