China News Service, January 21. According to the Spanish edition of the European Times, at about 3 pm on January 20, a building in the center of Madrid, Spain exploded, killing at least three people. The Mayor of Madrid stated that after a preliminary assessment, it was determined that the cause of the explosion was a gas explosion. The top four to five floors of the building were damaged to var 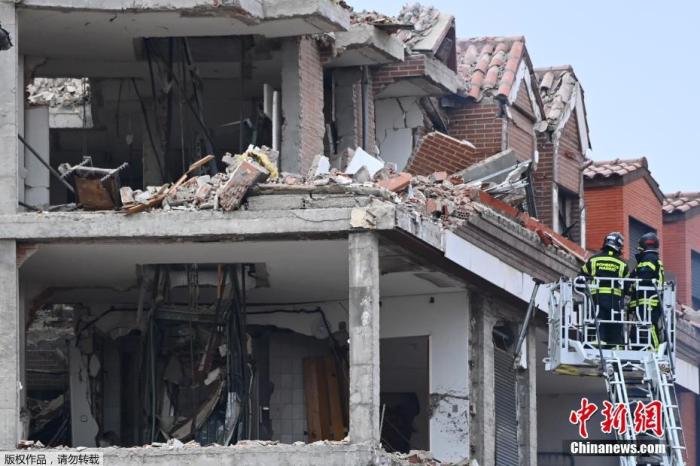 China News Service, January 21. According to the Spanish edition of the European Times, at about 3 pm on January 20, a building in the center of Madrid, Spain exploded, killing at least three people.

The Mayor of Madrid stated that after a preliminary assessment, it was determined that the cause of the explosion was a gas explosion. The top four to five floors of the building were damaged to varying degrees by the explosion.

The building where the explosion occurred is located at No. 98, Via Toledo in the center of Madrid, very close to the Gate of Toledo, next to a church and a school.

There is also a nursing home next to the explosion site.

On January 20, local time, an explosion occurred in a building in the center of Madrid, the Spanish capital. The accident killed 3 people and injured 11 others.

Among them, the victims included a Bulgarian man.

Officials confirmed that the explosion was caused by a gas leak.

The picture shows the explosion site.

The mayor of Madrid said that firefighters need to check whether the building that exploded and the adjacent walls of the nursing home were damaged.

At the same time, rubble from the explosion splashed into the school nearby.

A Chinese parent told the European Times reporter: "I heard a loud noise, and then I heard my WhatsApp parent group'exploded'. The kindergarten where the child was located was near the explosion site. A few minutes after the explosion. Inside, the kindergarten sent a soothing message to the parent group. First, I said that everything is fine here. Then I reported that the children were being moved to other areas."

After the incident, the explosive building caught fire from inside, but firefighters thought it was inappropriate to enter.

The mayor said that if the fire is extinguished now, it may cause water to accumulate inside, which will seriously affect the stability of the building.

He could not rule out the possibility that the building would collapse.

Nine Madrid fire brigades and 11 first aid teams have gone to the area where the incident occurred. The scene was also blocked by the police. The police dispersed the residents and pedestrians at the scene and urged citizens not to enter the nearby areas.

She introduced that there were about 30 guests in the restaurant at the time, and everyone jumped in shock.

She said that fortunately, no one was injured, and the guests insisted on leaving after closing the bill.

Soon after checking out, the roof of her restaurant collapsed.

She believed that her restaurant and nearby hotels were the worst affected.

A worker near the nursing home said in an interview with The National newspaper: “I heard an explosion about 400 meters away. As far as we know, there were no casualties (the nursing home) and all the residents have been evacuated.”

A woman said that she got out of the car after hearing the explosion. She thought the explosion happened 50 or 100 meters away from her.

The woman saw a person lying on the ground, although she was not sure whether it was the injured or the dead, and then she returned home in horror.

A 16-year-old girl was at home at the time of the explosion. She said she heard a loud noise at the time, "I thought it was firecrackers, but everyone looked out the window, and then our whole family went downstairs."

Near the scene of the incident, a bar temporarily took in the elderly evacuated from the nearby nursing home and contacted their relatives through social networks.