Joe Biden is sworn in as president. Trump is not there: farewell with great fanfare at the Andrews military base 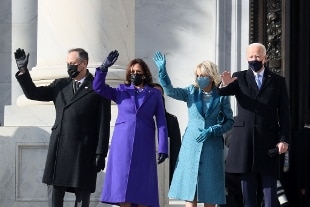 Preparations for the Inauguration Day 2021 (Ansa)

In a few minutes Joe Biden will officially be the 46th president of the United States.

in the Cathedral of St. Matthew the Apostle

with his wife Jill

, the same where John Kennedy's funeral was held.

Biden is the second Catholic president in US history.

There is a bipartisan air: 17 new Republican deputies have written him a letter in which they say they are ready to work with him: "We firmly believe that what unites us as Americans is greater than any other thing that divides us", the letter reads. sent by Texas Congresswoman Beth Van Duyne.

Biden's first commitment is to beat covid, which has infected 24 million Americans and killed more than 400,000.

The live broadcast of the inauguration ceremony

After the controversy, the suspicion, the legal initiatives and the assault on the heart of US democracy, with the invasion of Capitol Hill and the death of 5 people, Joe Biden takes command of America.

Donald Trump left the White House, along with Melania, in the early Italian afternoon.

, he lists his achievements and promises that his movement, Make America Great Again, is only just beginning.

Trump remains in politics, his intentions are to reapply for the presidential elections of 2024. As long as the

set up by the Dems fails.

He leaves with the conviction that he has been robbed of his second term, moves away convinced that those of November 3 were rigged elections and does not recognize Biden's victory;

snubs the inauguration ceremony and organizes a

at the Andrews base complete

with a red carpet, salute with 21 cannon volleys and soldiers in parade uniform.

And for the first time in US history, it breaks the traditional handover of the

with the very secret nuclear codes of the American arsenal: as a rule, the briefcase, which always follows the president carried by a military attaché, is delivered to another military attaché immediately after the oath and thus entrusted to the new tenant of the White House.

This time, the briefcase remained with Trump, following him to Florida (where he will go to live).

At 12 o'clock in Washington, that is, at the beginning of the Biden presidency sanctioned by the oath, the military attaché left for Washington, to deliver it to the new 'Commander in chief'.

A parade of stars, however, for Joe Biden.

Live coverage of the inauguration ceremony in the original language

Among the many, at the Inauguration day there are Lady Gaga, Jennifer Lopez and Tom Hanks.

Another reason for anger and recriminations - against the ungrateful collaborators, against the business world that he helped with his policies, against the members of the Republican party - with which Trump concludes a presidential mandate, played in the very last bars with the

The tycoon goes away, leaving behind a disrupted America.

The siege of Capitol Hill was, perhaps, the culmination of a laceration that has distant roots, prior to his election in 2016, but which have deeply rooted with him.

Biden 46th president of the United States, who at 78 is also the oldest in American history - will immediately have to start working to tackle a very complex historical moment for star-and-strip democracy, with a country never so divided.

Liquidating Trump's political legacy will not be easy: an intertwining of hatred, arrogance in the face of law and rules, division and public and personal unfairness exercised for the entire term have already forced Biden to give up for security reasons, for example , to get to Washington by train from Wilmigton, his hometown.

And his oath took place

in an armored capital out

of fear of new violence.

Less complicated for the new president to cancel the tycoon's legislative legacy.

, from stopping the anti-migrant wall on the Mexican border to the US re-entry into the Paris climate agreement and WHO.