400000! The death toll from the new crown is close to World War II, Biden mourns the dead before taking office

China News Service, January 20th. According to a comprehensive report on the website of Johns Hopkins University in the United States, as of 7:22 on the 20th, Beijing time, the cumulative number of confirmed new crown cases in the United States exceeded 24.22 million, and the cumulative number of deaths exceeded 401,000. example. US President-elect Biden held an event to commemorate the deceased 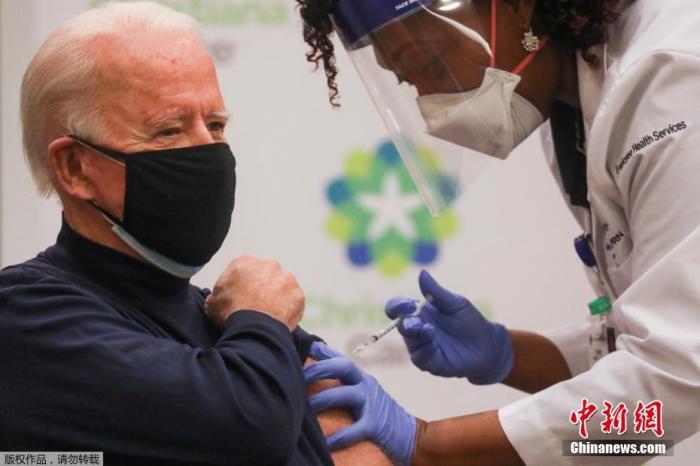 US President-elect Biden held an event to commemorate the deceased of the new crown in Washington on the 19th local time; the federal government's supply is insufficient, New York City's vaccine reserve is about to be exhausted, and multi-site appointments may be cancelled.

On December 21, 2020 local time, President-elect Biden of the United States publicly vaccinated the new crown vaccine in a hospital in Delaware, hoping to prove the safety of the vaccine to the public.

Over 400,000 deaths from the new crown in the United States!

According to reports, the number of deaths from the new crown in the United States is much higher than that of any other country, and is almost the same as the death toll in World War II. The total number of deaths in World War II and non-combat deaths announced by the Department of Defense and Veterans Affairs is only 405,399.

On the evening of the 19th local time, President-elect Biden of the United States held an event to commemorate the deceased of the new crown and participated in a lighting ceremony in the reflecting pool of the Lincoln Memorial.

At noon on the 20th local time, he will be formally sworn in as the 46th President of the United States.

Biden thanked the nurses at the commemoration and paid tribute to those who lost their lives in the new crown pandemic.

He said, "In order to heal, we must remember. Although it is sometimes difficult to remember, this is how we heal. As a country, it is important to do so, and this is why we are here today."

Vice President-elect Harris also delivered a speech at the memorial ceremony calling on Americans to unite: "For months, we have been mourning alone. Let us mourn and heal together tonight..."

After the event, 400 lights were lit next to the reflecting pool, symbolizing the lost lives, and landmark buildings across the United States were also lit to commemorate the victims of the new crown, and church bells rang in unison.

The number of new crown cases across the United States has surged in recent weeks, with hundreds of thousands of new cases every day, and the number of hospitalizations and deaths hit a record high.

In the past 7 days, an average of 3,237 people died of the new crown every day in the United States, slightly lower than the peak reached on January 13, when the 7-day average was 3,377.

According to the new crown tracking project report, as of the 18th, the number of new crown patients admitted to hospitals in the United States was 123,800.

Governor of New York: Not giving aid will sue Biden

On the morning of the 19th local time, New York Mayor Bai Sihao said that the city's new crown vaccine will be exhausted on the 21st.

Last week, New York City received 220,000 doses, which is equivalent to one injection every three seconds, exceeding the expected rate of 175,000 doses.

Bai Sihao emphasized, "We have the ability to vaccinate a large number of people. We need a supply that can keep up with the schedule." Due to obvious shortages, some hospitals have had to cancel vaccine appointments or stop accepting new appointments.

And New York Governor Cuomo said that after he wrote to the federal government for more supplies, not only did the supply in New York State not increase this week, it also decreased by 50,000 doses from last week.

On the other hand, Cuomo also stated on the 19th that if the federal government cannot provide $15 billion in aid to help New York State balance its budget, he will sue Biden, who is about to become president.

He said, "Trump is gone, but the damage to New York still exists. The severe epidemic in New York State in the spring was caused by federal negligence." "The damage was not caused by the new federal government, but they are in legal, moral and It is politically responsible to correct it."

Cuomo expressed his hope that Schumer, who is about to become the majority leader of the Senate, and Speaker of the House of Representatives Pelosi can help New York State.