The generals issued a rare statement .. Does the US military have to choose between protecting the constitution and obeying the president?

The founding fathers of the United States did not imagine that members of the US armed forces would face the dilemma of choosing between protecting the constitution and obeying the orders of the President of the Republic in his capacity as commander in chief. 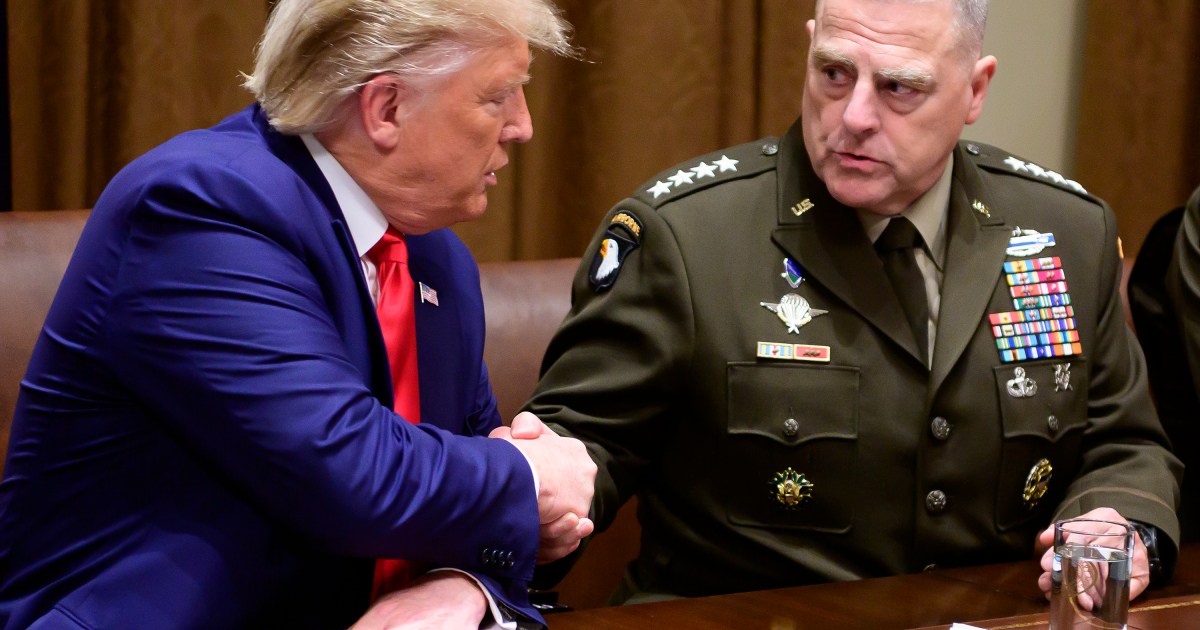 With these words, the career path of US armed forces personnel begins, focusing on loyalty and defense of the Constitution, while at the same time obeying the orders of the President of the United States.

No person joining the US Army is complete and legal until after swearing an oath.

The founding fathers of the United States did not imagine that members of the US armed forces would face the dilemma of choosing between protecting the constitution and obeying the orders of the President of the Republic in his capacity as commander in chief of the armed forces.

Throughout the American history that extends for nearly 250 years, the US military has not had to choose between the two matters;

However, the recent accelerating and continuing political events have prompted some to worry about what President Donald Trump may do, especially with his continued refusal to acknowledge his electoral defeat.

Less than a week after President Trump's supporters stormed the Capitol (Congress) to disrupt the approval of House and Senate members on the election results on the 6th of this month, the Joint Chiefs of Staff issued a rare statement clearly indicating that Joe Biden had won the presidency after the Electoral College announced the result, and the approval of Congress. .

The statement, which was signed by the Chief of Staff and commanders of the main branches of the armed forces, affirmed that "the US military obeys the legal orders of the civilian leadership."

The statement also indicated that, "on January 20, 2021, according to the constitution, and what states and courts have confirmed, and approved by Congress, President-elect Biden will be installed and will become Commander-in-Chief of the Armed Forces No. 46."

That statement was preceded by the announcement by Nancy Pelosi, Speaker of the House of Representatives, that she had discussed with the military leaders preventing President Trump from launching any military operations or directing nuclear strikes.

"The situation of this dysfunctional president is extremely dangerous, and we must do everything in our power to protect the American people from their unbalanced attack on our country and our democracy," Pelosi said.

In the same context, 10 former US defense ministers, who belong to the Republican and Democratic parties, warned of any interference by the army in the political process, stressing that the elections have ended.

"As former defense ministers, we have a common view on the official obligations of the US armed forces and the Department of Defense," their statement read. "We have all vowed to uphold and defend the constitution against all enemies, at home and abroad, and we have not sworn to that for a particular person or party."

Last summer, with the outbreak of widespread protests in dozens of American cities against the background of the killing of a black American citizen, George Floyd, by a policeman in Minneapolis, Trump called the army to control the protests in Washington, DC.

Experts saw this move as a violation of the balance of established civilian military relations, and a number of former senior military officials launched a sharp attack on Trump at the time.

General Mark Milley, the US Chief of Staff, admitted the mistake after joining President Trump in marching to a church to take pictures, after the army forces dispersed the protesters using tear gas and rubber bullets.

"My presence at that moment and in those circumstances gave the impression that the military is participating in domestic politics," Milley said in a speech to graduates from the National Defense University.

That incident prompted Elisa Slotkin and Micky Sherrill, two Democratic lawmakers in the House of Representatives, to direct written questions before the presidential elections to both former Defense Secretary Mark Esper and General Millie, about concern that Trump might refuse to voluntarily leave office or attempt to use the military to cling to power if Biden won the election.

General Milley distanced the army from political debates, and responded with an official letter stating that "in the event of a dispute over aspects of the elections, according to the law, the US courts and Congress are the two demands that any dispute be resolved, not the US military."

The army and the transition process

The founders of the American state feared the army would interfere in political life, and the constitution limited any possibility of unelected military officers controlling the government.

The constitution defines precisely the responsibilities of the elected president, chief among them being the commander in chief of the armed forces.

On the other hand, Americans are confident that their army is not motivated by internal political or partisan whims.

And the law specified the return to US courts and access to the Supreme Constitutional Court to resolve any dispute over the identity of the winning candidate, in the event of a crisis in the counting or counting of votes, or if a candidate did not admit defeat.

The constitution gave no role to the army in the political transition process.

Rather, he specified the necessity for the defense minister to be a civilian, as he stripped the chief of staff of any political powers and made the position weak, with which the president could dismiss him whenever he wanted.