Since December, nearly 600 social housing units have found themselves without heating due to breakdowns on the Toulouse heating network 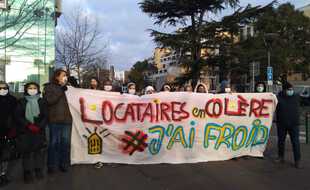 During a demonstration by tenants of the Faourette, on January 12, to demand the return of heating.

While temperatures have not exceeded 5 ° C in recent days, residents of the Pink City are living bundled up in their jackets, both inside and out.

For weeks, dozens of tenants in Toulouse Métropole Habitat residences have found themselves without heating in their low-cost apartment, where the thermometer is blocked at 16 ° C in the best of cases.

“There have been problems since October in 589 housing units in La Faourette.

Tenants were promised that this would be resolved on December 23, which is the case in some of the residences, but some still have no heating, i.e. nearly 200 units and they have not made a commitment on recovery times ”, underlines Laurence Kantzer, member of Right to Housing 31, who brings the case to the social landlord and yesterday organized a demonstration in front of one of its agencies.

Toulouse Métropole Habitat explains that it was confronted with a first, then a second major leak in the district heating network, causing heating malfunctions in the three residences Dauriac, Le Parc and Mermoz.

While the repairs were completed on December 23, other problems have arisen in the meantime.

Despite the resumption of heating, "on some housing including the Le Parc residence, located at the end of the network, shortcomings are still to be noted", recognizes the lessor who has been carrying out an intervention since yesterday on this residence.

To have acceptable temperatures, he indicates that he will push the heating and that work will be scheduled this summer on the network.

Some people having purchased an additional electric heater, it has also decided to grant tenants compensation which will apply to the January receipt.

“We are told about an allowance between 40 and 80 euros, we find that this is not enough, most have invested in additional equipment and have run this heating for three months in poorly insulated housing.

What the tenants did not appreciate was the lack of communication that they experienced as contempt, there they undertook to send text messages to inform them, ”continues the DAL activist who deplores the length of time. intervention while the cold is well established in the region.

What is this story of saving electricity requested by RTE?

“Energy strainers”: G-rated accommodation can no longer be rented from 2023