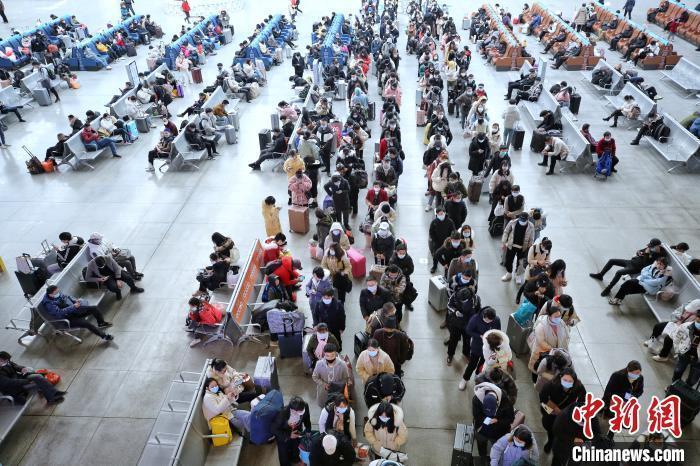 Chinanews client, Beijing, January 13th (Reporter Li Jinlei) "If you have money but don't have money, go home to celebrate the New Year", but this year's Spring Festival is destined to be extraordinary, because the state encourages the Chinese New Year on the spot.

In order to guide more people to celebrate the New Year on the spot and let more people spend a good year on the spot, local governments and enterprises have also tried: red envelopes, subsidies, consumer vouchers, free traffic and tickets, free bus rides, etc. Welfare, there are even points rewards for the floating population, extra points for enrolling children under the point system... Under the temptation of real money, will you celebrate the New Year on the spot?

Proposal to celebrate the New Year in situ

Recently, there have been many sporadic cases and even local clusters of epidemics in China. The situation of prevention and control of the winter epidemic is severe. In this context, from top to bottom, emphasis is being placed on non-essential non-returning to the hometown and Chinese New Year.

The State Council has issued a notice recently to encourage employees to take vacations at the workplace.

Local governments should increase publicity, encourage enterprises and institutions to flexibly arrange vacations according to production, work conditions and workers' wishes, and guide workers to take vacations at their workplaces as much as possible during the Spring Festival.

On January 10, the first meeting of the State Council’s Joint Prevention and Control Mechanism Spring Festival Transport Work Team also proposed that the current situation of epidemic prevention and control is severe and complicated. It is necessary to reduce unnecessary travel, reduce the gathering of people, reduce the risk of on-the-go, and ensure that the epidemic does not spread due to the Spring Festival. .

From a local perspective, localities have also responded to the call. Many provinces including Beijing, Shanghai, Guangdong, Shandong, Henan, Hebei and other provinces have successively issued the “non-essential non-return home during the Spring Festival” initiative to encourage enterprises and institutions to arrange flexible vacations for employees. Chinese New Year on the spot.

Zhang Boli, an academician of the Chinese Academy of Engineering, recently reminded that on the National Day last year, "it is fine for hundreds of millions of people to move," but it is "not possible" to move during the Spring Festival.

He said that because it is now in the cold season, it is very suitable for the virus to survive.

With the coming of spring, and the general vaccination of the new crown vaccine, the situation of epidemic prevention and control will basically improve, and even a decisive victory will be ushered in.

"On the one hand, I am very supportive of the epidemic prevention policy. On the other hand, the workers who are alone outside look forward to these few days a year. When they go home and lie down, they can save enough courage to run around for the next year. The meaning of the New Year does not lie in passing that time. It’s about family reunion.” On the one hand, it is the need for epidemic prevention and the temptation to go home on the other. Many people are entangled in the multiple-choice questions of “go home and stay”.

In order to let more people choose to stay, in addition to publishing initiatives, some places also put out real money to give New Year red envelopes to workers who stayed in the local New Year.

A few days ago, Quanzhou City, Fujian Province introduced eight measures to encourage local Chinese New Year. Among them, trade union members of non-Quanzhou enterprises who stay in Spring for the New Year from February 11 to 17 should present their personal ID cards, "Quan Gonghui" employee service card, and Min Zheng Tong "Communication big data itinerary card", after review and confirmation, apply for a New Year red envelope online at the standard of 200 yuan per person.

Taizhou governments at all levels will give priority to some enterprises to provide support subsidies for migrant employees who stay in Taizhou during the New Year. The subsidy standard principle is 380 yuan/person and 280 yuan/person.

Wuxing District, Huzhou City, Zhejiang Province will issue a red envelope of 1,000 yuan per person to employees staying in Wu during the Spring Festival on construction sites.

In addition to the New Year red envelopes, there are various subsidies and subsidies.

Quanzhou has made it clear that during the Spring Festival (February 11 to February 26, 2021), the designated industrial enterprises, restricted commercial and trade enterprises, and migrant workers from outside the province who are under construction in key projects at the city level and above can be granted Appropriate holiday subsidies.

For enterprise employees of non-Quanzhou families who stay in Spring for the New Year, each household will be given a one-time hardship subsidy of 1,000 yuan.

According to Zhejiang Lishui Economic Development Zone, from February 1st to 28th, for enterprise employees who meet the requirements, the development zone will provide enterprises with overtime subsidies and meal guarantee subsidies according to the standard of 50 yuan per person per day and 20 yuan per day. .

Many companies have also introduced a series of incentives for staying in factories.

According to media reports, Xiamen Baotai Biotech, a high-tech enterprise in Xiamen, announced that it would give out 30 million yuan + red envelopes to reward and condole employees for "staying in Xiamen", with an average of 5,000 yuan per capita.

Zhejiang Tianpai Knitting Apparel Co., Ltd. has made it clear that those who choose to stay in the factory during the Spring Festival, from December 27th to the seventh day of the first month of the lunar calendar, in addition to getting 2-3 times the usual salary, they can also enjoy free meals in the company canteen; Employees who choose to be on duty on the 30th and the first day of the new year can enjoy an extra 1,000 yuan per day.

Under the temptation of high subsidies, some workers said: “The current situation of the epidemic is severe. The company not only provides free board and lodging, but also enjoys high allowances, and decided to stay in the company for a year of peace of mind.”

Not only red envelopes and subsidies, some places also provide Spring Festival consumer vouchers, free tickets, free traffic, free bus rides and other benefits, and even point rewards for the floating population and extra points for enrollment based on children's points system.

Quanzhou stated that employees of non-local employment companies who stay in Spring during the Spring Festival can take free buses with their personal ID cards and are exempt from tickets for state-owned A-level tourist attractions.

Taizhou provides free 10G local data that can be used during the Spring Festival for foreign employees who stay in Taizhou for the New Year (the mobile phone number belongs to Taizhou).

In addition, migrant employees who hold the "Zhejiang Residence Permit" issued by the Taizhou Public Security Bureau and stay in Taizhou for the New Year will be awarded 5 points.

Xiuzhou District, Jiaxing City, Zhejiang Province encourages employees to stay on show during the Spring Festival. The company organizes continuous production from January 27, 2021 to February 19, 2021, and provides renting subsidies to foreign employees who stay in Xiuzhou, 300 yuan per person ； During the period from January 27, 2021 to February 14, 2021, if a foreign employee of an enterprise stays in Xiuzhou and meets the points admission application requirements, he/she will be a one-time based on the original points result when the children of new residents enroll in the points system in 2021 Add 5 points (both parents can score separately).

"If you don't go home for the holidays this year, stay at the company to earn money." "Rather than return home to isolate for 14 days, it is better to stay and earn an extra four to five thousand."... This Spring Festival, are you planning to celebrate the Chinese New Year on the spot?