News from the world

Today's newsstand is only apparently all American, because in the international press the developments in Washington pose questions to all liberal democracies: from the dismissal of an institutional office to political censorship on social media 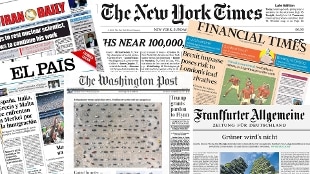 Nancy Pelosi and others are calling for Trump to be removed by calling for the 25th Amendment.

The Democrats then threaten to resort to impeachment.

The Minister of Transport also resigns.

Under the 25th Amendment, the vice president and a majority of the 15 cabinet members can declare the president unable to "exercise the powers and duties of his office."

If the president disputes this decision, two-thirds of the House and Senate must vote to transfer powers to Pence as interim president.

Riding on this insurrection and coaxing the rioters, the president renounced his moral authority to hold the highest office in the nation, albeit for a few more days.

Resignation would be the preferable means.

Richard Nixon resigned when Republican Party elders told him she was in the middle of the Watergate scandal.

But there is no reason to believe that Trump will leave voluntarily, even with the pleas of top advisers and Republican lawmakers.

The impeachment of Congress is another possibility.

But time is running out and Trump maintains significant support among Congressional Republicans.

Even after Wednesday's uprising, 139 lawmakers and eight senators backed Trump's efforts to overturn the will of voters in Arizona and Pennsylvania.

With Trump crippled, discredited, will the Republicans eventually cut ties with this president?


The Republican Party has failed, here's how it must change now, writes Kristi Noem, governor of South Dakota.

We all agree that the events that took place on Capitol Hill this week were unacceptable.

But there are many in the media eager to blame Republicans for these facts.

And there are many in our party who are keen to blame President Trump for both the violence in Washington and the Senate election results in Georgia.

We have a lot of work to do in the coming days.

What may have worked in the past is no longer enough.

It is not enough to say: "vote for us because you will earn more".

It is not enough to say: "vote for us because we will cut your taxes or we will reduce the rules and regulations for your business".

It is not enough to say: "vote for us because we will fight against abortion, Obamacare or anything else".

It is not enough to be against.


Newt Gingrich (former Speaker of the House, Republican): Even after Trump's exit, the crusade to preserve America's freedom must continue

More than 74 million Americans voted for Trump in the 2020 presidential elections, a record.

The anti-Trump news media spent four years defining these voters as racist and now portrays them as insurrectionists due to the actions of a small minority.

In fact, most are patriotic and law-abiding Americans who see a culture under siege by the radical left.

All aspects of our culture - schools, media, Big Tech, bureaucracy, corporations - are dominated by the left and are becoming more radical.

The behavior of the media is particularly striking.

What happened on Wednesday at the Capitol should obviously be condemned.

But the same should be true of the violence and chaos perpetrated by the left that has destroyed businesses and ruined countless lives.

This double standard is striking.

No more tweets, no more FB posts: the president of the USA is banned on the main social networks after inciting the assault on Capitol Hill.

Dominique Boullier, digital media specialist, professor at Sciences Po in Paris speaks: platforms must take editorial responsibility for published content and, above all, change their architecture, which now it is bound to highlight the most divisive content, even when it is detrimental to public debate.

A legal decision under American law, supported by a legal basis - the violation of their terms of use - questionable but solid.

It is an emancipation, in the name of the moderation principle, from the duty of neutrality that their guest status naturally imposes on them.

Beyond the legal quibbles, Trump's ban from agora 2.0 recalls the absolute need for transnational regulation.

Now they will learn what will happen next

Can right-wing populist sentiment be banished from American life by the brute force of social media censorship?

We're about to find out.

After the invasion of Capito Hill, the big tech companies moved aggressively and in unison against Donald Trump and his supporters.

They say they want to marginalize the violent fringe, but their censorship will instead make it grow.

Alexei Navalny stressed that, unlike the open election process that ousted Trump, social media decisions are irresponsible and arbitrary.

"Don't tell me he's been banned for violating Twitter's rules. I've been receiving death threats here every day for many years and Twitter has never banned anyone," tweeted Navalny.

The actions against Trump and Parler demonstrate the influence of companies on online conversations and the political nature of their decisions.

Now the spotlights are fully on them.

Not So Fast, by Chris Cis

Even after the events last Wednesday, 138 Republicans in the House voted to oppose the results of the Electoral College in Pennsylvania, despite the fact that there is no evidence of fraud.

And among them party leaders such as Kevin McCarthy (California) and Steve Scalise (Louisiana).

McDaniel was Trump's choice and, in his speech, after getting another two-year term, he praised the outgoing president for "redesigning our party's political map and proving that we can compete and win in non-traditionally republican communities. ".

He has not exposed any criticism, veiled or otherwise, of Trump's actions over the past week.

The Capitol Crowd: A Furious Collection of Grievances and Disillusionment

Those who broke into Capitol on Wednesday come from at least 36 states, according to a list of more than 100 people identified as present on the scene.

Pious Christians with Bible verses, QAnon conspiracy theorists, and members of documented hate groups, including white and far-right nationalist organizations such as the Proud Boys.

Some surprising commonalities are hard to ignore.

Most of them are white.

Many have left extensive social media documentation of their passions, ideologies and, in some cases, disillusionment and thirst for revenge.

Democrats split over how hard it is to push Trump's impeachment

House members insist the president faces the aftermath of inciting last week's deadly assault on the United States Capitol while President-elect Joe Biden doesn't want the effort to interfere with his agenda.


Will Joe Biden's inauguration on January 20 be safe?