Emergency assistance, 38 letters of assistance for investigation... Fighting the epidemic again is still a game of chess in the country!

China News Service, Beijing, January 11 (Reporter Xing Chong) Since January 2, the epidemic in Hebei has developed rapidly. As of 24:00 on the 10th, a total of 265 confirmed local cases and 203 local asymptomatic infections have been detected. There are 1 high-risk area and 30 medium-risk areas in Hebei Province.   Many experts have long asserted that the low temperature in winter can easily le 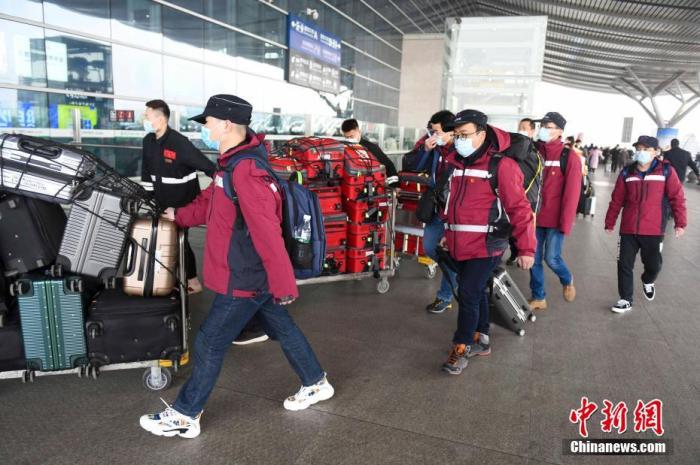 China News Service, Beijing, January 11 (Reporter Xing Chong) Since January 2, the epidemic in Hebei has developed rapidly. As of 24:00 on the 10th, a total of 265 confirmed local cases and 203 local asymptomatic infections have been detected. There are 1 high-risk area and 30 medium-risk areas in Hebei Province.

Many experts have long asserted that the low temperature in winter can easily lead to the spread of the virus. Not long ago, many places in China, including Hebei, encountered cold waves, and the temperature hit a new low after the winter.

The National Health Commission said frankly that the domestic epidemic prevention and control situation is still severe and complicated this winter and next spring, and the tasks are arduous and onerous.

Faced with the raging epidemic again, many places in China quickly linked together to contain the development of the epidemic at the fastest speed.

On the same day, 23 members of the Hunan Provincial Epidemiological Investigation Team took the high-speed rail to Shijiazhuang City, Hebei Province with protective materials to assist the local area in the prevention and control of the new crown pneumonia epidemic.

"Hope" together in the same boat

According to the current survey information, a large number of confirmed cases in Hebei Province are concentrated in many villages, including Xiaoguozhuang Village, Liujiazuo Village, and Nanqiaozhai Village, Zengcun Town, Gaocheng District, Shijiazhuang. Many confirmed cases have participated in weddings, funerals and other activities.

The epidemic in Xingtai City, Hebei Province is also linked to Shijiazhuang.

In the case that the source of the epidemic is unknown, in order to curb the transmission route, Hebei decided to complete the nucleic acid test of all the population of more than 10 million people in Shijiazhuang in three days from the 6th.

In Xingtai, another place where the epidemic occurred in Hebei Province, after completing the nucleic acid test on the nearly 370,000 people in Nangong City on the 6th, it was decided to initiate the nucleic acid test for all members of more than 6 million people in other areas of the city at the same time, which was also within three days. Finished within.

In three days, a population of more than 16 million, and nucleic acid testing for all employees, this is another record in China's anti-epidemic history.

On the evening of the 7th, 106 members of the Jiangsu Provincial Inspection and Medical Team arrived in Hebei.

When the epidemic situation in Hubei was severe at the beginning of last year, the Jiangsu medical team dispatched more than 2,800 medical personnel to urgently assist and undertake a large number of critically ill regional medical care work.

This time they went retrograde to Yanzhao Earth. They carried equipment, consumables, and protective materials and divided them into five teams to carry out nucleic acid testing.

The race against the virus continues.

On the afternoon of the 9th, 20 medical team members from Beijing Tiantan Hospital carried 5 sets of testing equipment and instruments, 50,000 nucleic acid detection reagents, and protective materials for 30 days, and set off to Xingtai Nangong; on the 10th, Tianjin dispatched 5 negative pressure emergency vehicles , 2 material vehicles, 1 command vehicle and 24 medical personnel support Nangong and are responsible for the pre-hospital transfer of confirmed cases.

On the evening of January 10, a 15-meter-long, 4-meter-high, integral vehicle-mounted mobile CT with a value of RMB 5 million drove out of the Zhongnan Hospital of Wuhan University to Hebei to help the Hebei region quickly diagnose new coronary pneumonia.

A year ago, the whole country rushed to help Wuhan, and a year later we were in the same boat and "hope" together.

On the evening of the 10th, the Zhongnan Hospital of Wuhan University dispatched an integrated vehicle-mounted mobile shelter CT to assist Hebei. This is the only vehicle-mounted mobile shelter CT in Hubei Province. It can check 300 people per day and can quickly screen patients with new coronary pneumonia; more than 300 in Wuhan Volunteers donated 50 tons of vegetables to the Shijiazhuang organization, which have already arrived in batches.

38 letters of assistance to check the spread of the epidemic

In addition to the retrograde in white clothes and armour, quickly curbing the spread of the epidemic to a wider area is another urgent task.

The Hebei epidemic occurred around New Year's Day, which coincided with a period of frequent personnel movement.

The flow of information shows that the scope of activities before the case is confirmed is complicated. For example, many confirmed cases have attended weddings around New Year's Day. The wedding scene includes guests from other places such as Xi'an. There were also confirmed cases in Xingtai Nangong City who had traveled to Luoyang, Henan and other places.

As an important transportation hub in northern China, Shijiazhuang has always been known as the "city drawn by trains".

Chifeng, located at the junction of the three provinces of Mongolia, Hebei, and Liaoning, decided on the 8th to enter a wartime state. According to preliminary statistics, more than 3,600 people entered Chifeng from Shijiazhuang and Xingtai within two days.

More importantly, in the context of the coordinated development of the Beijing-Tianjin-Hebei region, the "outside prevention" of the epidemic in Hebei has attracted more attention.

Beijing Tongzhou District, which was handed over to Hebei, has also entered a wartime state of epidemic prevention and control starting on the 7th.

According to Shi Jian, director of the Emergency Office of the Hebei Provincial Center for Disease Control and Prevention, as of 16:00 on January 9, Hebei Province had sent 38 assistance letters to 20 provinces and cities across the country. The total number of contacts involved in the case was 119. Co-investigation and reply to the letter, all implemented isolation control measures, so far no positive test has been found.

On January 11, the villagers of Beiqiaozhai Village, Zengcun Town, Gaocheng District, Shijiazhuang, were moving in an orderly manner.

The nationwide game of chess epidemic situation is more controllable

Although the number of confirmed cases in Hebei is still increasing, many experts said that the development of the epidemic situation in Hebei has become more controllable under the rapid national linkage.

Wang Daming, a researcher at the Suzhou Institute of Biomedical Engineering and Technology, Chinese Academy of Sciences, said in an interview with our reporter that although we are also faced with factors such as winter low temperature and population mobility that may exacerbate the spread of the virus, compared with the same period last year, the epidemic situation this year is more controllable. .

"The people in rural and urban areas have already had a certain awareness of prevention and control. The epidemic prevention materials and testing reagents are relatively sufficient, and the medical and nursing forces are in place."

Zhang Wenhong, director of the Department of Infectious Diseases at Huashan Hospital Affiliated to Fudan University, also recently publicly stated that the spread of the new crown epidemic follows the rule of “spotting, clustering, and dispersion”. The recent Shijiazhuang epidemic has obvious clustering characteristics, but it has not reached the stage of dispersion. In addition, compared with last year, China’s Diagnostic capabilities, isolation capabilities, and government experience are much better. The epidemic is expected to be controlled within a few weeks or a month. I am confident about this.

Judging from the current state of the confirmed cases, they are also under control.

Tong Zhaohui, a treatment expert from the National Health Commission who is on the front line of the fight against the epidemic in Shijiazhuang, revealed that the confirmed cases of the Hebei epidemic have developed rapidly, with more asymptomatic infections, and all critically ill patients have been admitted, and the condition is relatively stable and generally controllable.

As the Spring Festival approaches, many places in China have issued reminders that they propose to celebrate the New Year in the place of work and reduce the flow of people.

Sun Tieying, director of the Department of Internal Medicine of Beijing Hospital, told reporters on this website that as the number of migrant workers in rural areas increases, the connection between urban and rural areas is strengthened, and rural areas are easy to come and gather. The Hebei epidemic reminds that once a case occurs, it is likely to show exponential transmission. Therefore, The most important thing is to do personal protection, and to wear a mask for respiratory diseases.