Chinese electric car maker Nio, on Saturday, launched its first sedan model, called ET7, as it looks to a larger share of the auto market in the world. 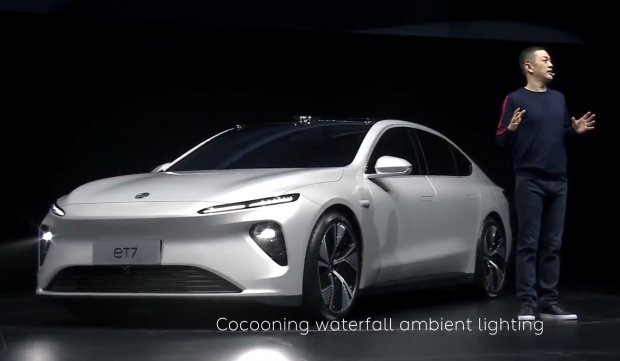 Chinese electric car maker Nio launched its first sedan model, called ET7, on Saturday, as it looks to a greater share of the global auto market.

The launch of "ET7" came as rival "Tesla" started selling its Chinese-made "Y" SUV in the Chinese market.

Sedans and SUVs account for about 46% of total sales in the Chinese passenger car market.

Chief Executive William Lee said the new battery technology in NEO gives the ET7 a driving range of more than 1,000 km between charges.

The price of the car starts at $ 58,000 for a car without a battery, and it is one of the most expensive components of electric vehicles, which can then be leased from the company, while its price with the battery starts from $ 69,000.

He told me that the ET7 will be equipped with lidar sensors, which help the car to perceive its surroundings, and which are often found in self-driving cars to assist drivers, a technology rejected by Tesla chief Elon Musk.

And Tesla - which sells model 3 sedans, made in Shanghai - began selling its "Y" car at a starting price of $ 52,000, and uses cameras to assist the driver.

The market value of "New" - which delivered 43,728 vehicles last year - is more than $ 92 billion, surpassing the traditional automakers, such as: Daimler and General Motors.

The company currently sells 3 models of the SUV that were manufactured in a car factory in Hefei (eastern China).

"Xpeng", a competitor to "Niu", said it plans to launch a new sedan model, and it currently has a sedan and an SUV in its lineup.

It reduces the cost of purchasing IT7 without a battery (ie subscribing to the Neo battery as a service) to: