Snowstorm wreaks havoc in Spain Madrid (AFP) Hundreds of motorists stranded, airport closed, skiers or sleds in the streets: a snowstorm paralyzed Madrid and part of Spain on Saturday, where the worst was yet to come due to heavy falls still expected during the day. "Let us avoid travel and follow the indications of the emergency services. Let us be very vigilant in the face of storm Filomena", tweeted Prime Minister Pedro San 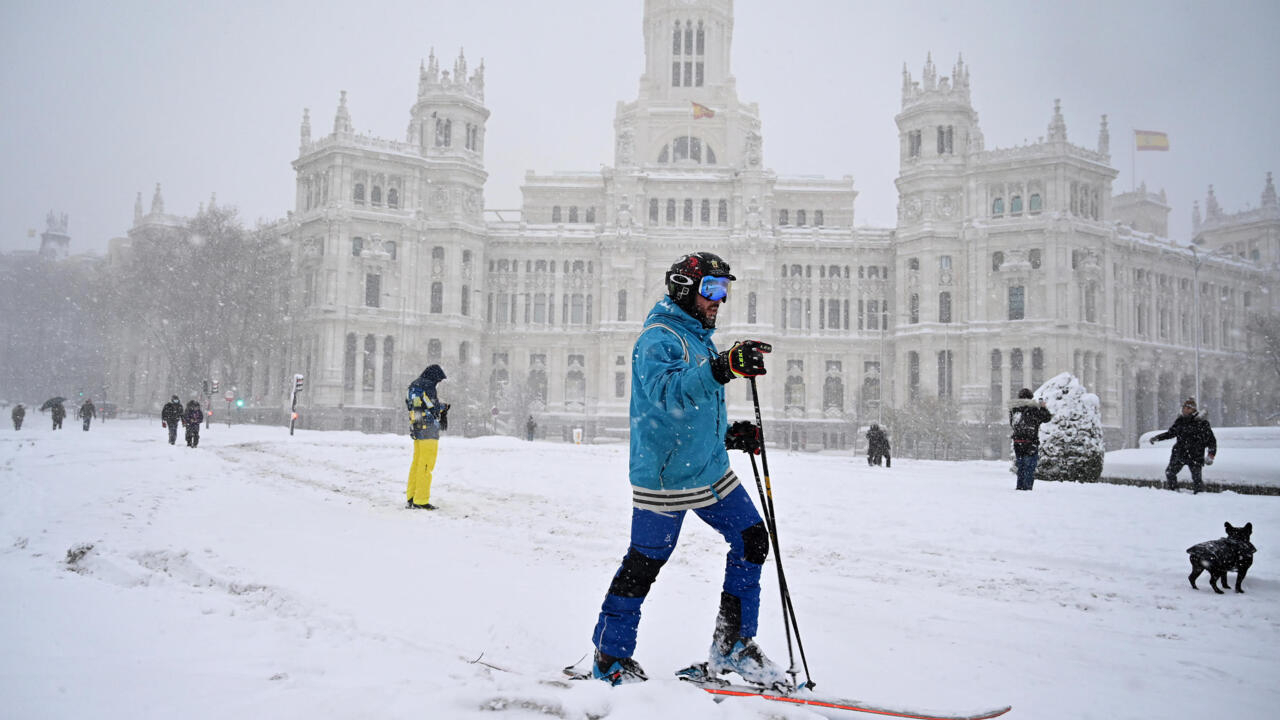 Hundreds of motorists stranded, airport closed, skiers or sleds in the streets: a snowstorm paralyzed Madrid and part of Spain on Saturday, where the worst was yet to come due to heavy falls still expected during the day.

"Let us avoid travel and follow the indications of the emergency services. Let us be very vigilant in the face of storm Filomena", tweeted Prime Minister Pedro Sanchez, praising the work of "professionals who are trying to help people stuck in the snow ".

In Madrid, covered by a snowpack unprecedented for half a century, residents took out their skis as in the famous Puerta del Sol square in Madrid or even a sled pulled by five dogs, according to images taken by AFP or uploaded to social networks.

Due to this historic snowfall, the heaviest since 1971 in Spain, five regions in the center of the country, including Madrid, were placed on red alert on Saturday morning.

In the capital, "the situation is extremely serious," warned its mayor José Luis Martinez-Almeida on Twitter, calling on residents not to leave their homes as the flurry-laden squalls continued to grow. 'strike down on the city without stopping since Friday evening.

Parks are closed there, public buses suspended as well as garbage collection.

Madrid-Barajas International Airport, closed since Friday evening, will keep its doors closed on Saturday for "security reasons" while around thirty flights have already been canceled on Friday and almost as many have to land elsewhere.

Arriving at the airport on Friday at 5:00 p.m., Covadonga Solares, 24, told AFPTV that he had boarded his plane and stayed there "for 3h30 without information" while waiting for the runway to be cleared of snow.

The young woman and all the other passengers on the flight were eventually brought back inside the airport where they slept "on the conveyor belts and counters" of the terminal.

Several matches in the Spanish football championship have been postponed indefinitely, such as Real Madrid against Osasuna or Atletico Madrid against Bilbao, the players not being able to land or take off to the cities where the matches were to be held.

The Spain-Croatia handball match scheduled for Saturday at 6 p.m. in Madrid has also been canceled, the Spanish federation said.

"Faced with the situation caused by the Filomena squall", all trains arriving or leaving Madrid have been canceled, said the national railway company Renfe, while at least two metro lines saw part of their traffic interrupted in the capital.

Emergency services in the Madrid region said they had "worked all night to help" stranded motorists and "freed 1,000 vehicles", asking others to "stay patient".

Besides Madrid, Aragon, the region of Valencia and that of Castile-La Mancha and Catalonia were the areas most affected by this storm due to an interaction between a very humid and relatively mild air flow coming from the south east and a very cold air mass.

In total, 36 of Spain's 50 provinces are affected by snow warnings.

Catalonia has banned the circulation of heavy goods vehicles, as has Castile-La Mancha, which further indicated that 1,300 trucks are currently stationed in several areas of the region.

Patricia Manzanares, a motorist, told national television that she had been stranded for "3pm" without food on the M-40 motorway in the Madrid region.

"I've been there since 7 p.m. last night, we are a lot in this case, there is 60 cm of snow and we will soon run out of gasoline (to operate the heating in the car)", he said. she says.