"In connection with the increase in the number of deaths": the Investigative Committee has re-qualified the case of the death of tourists in Norilsk to a more serious article

In Norilsk, as a result of an avalanche, three people died, their bodies were found by employees of the Ministry of Emergency Situations. Search and rescue operations in the area of ​​the mountain-skiing complex "Gora otdelnaya" were carried out in the conditions of 23-degree frost and snowstorms. The UK opened a criminal case under the article on the provision of services that do not meet security requirements. Later, the case was reclassified into a more serious article, taking into account the fact of the death of several people. The department intends to check the legality of the placement of houses, in which there were tourists at the time of the avalanche. 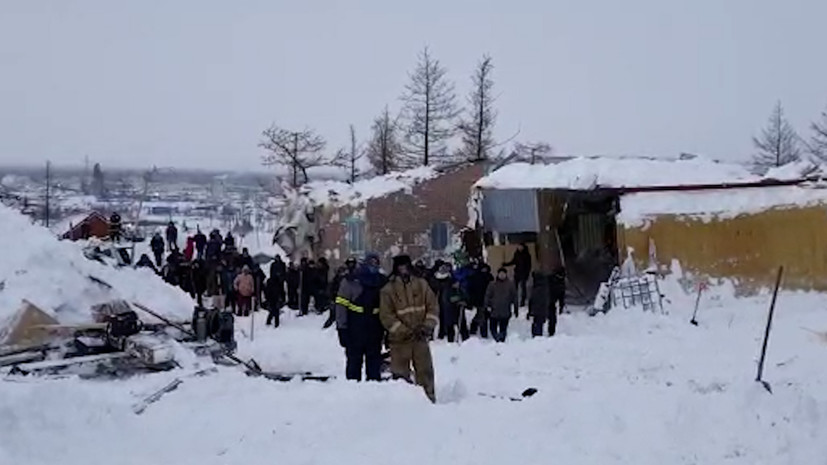 The avalanche in Norilsk killed at least three people.

Later, the bodies of a man and a child were also found at the scene.

"During the ongoing search activities, the body of a baby was found, presumably the son of a deceased woman," Olga Shamanskaya, an official representative of the region's IC, told RIA Novosti.

According to Shamanskaya, an avalanche dragged one of the houses 200 meters down the slope.

Recall that an avalanche descended on Friday at about 20:30 Moscow time in Norilsk in the area of ​​the mountain skiing complex "Separate Mountain", as a result of which several small buildings were buried under the snow.

The forces of the Siberian regional search and rescue detachment of the EMERCOM of Russia were sent to the scene.

Later, employees of the Dudinsky Arctic search and rescue team of the EMERCOM of Russia arrived to the aid of the already involved forces.

The head of the regional headquarters of the Ministry of Emergency Situations Igor Lisin and the task force flew to the scene on an An-74 plane.

In total, more than 200 rescuers and volunteers were reported to work at the avalanche site.

According to representatives of the Ministry of Emergency Situations, the work was complicated by the fact that the emergency occurred in the dark, and in the area of ​​the avalanche, the temperature was recorded at -23 ° C with a blizzard with gusts of wind up to 12 m / s.

By 9:00 Moscow time, the press service of the regional Ministry of Emergencies announced the imminent completion of the search work in connection with the discovery of everyone who could be in the area of ​​the incident.

After the avalanche came down, information appeared about the rescue of four people.

In addition, a man who got out of the avalanche on his own asked for medical help.

During the rescue work, a 15-year-old teenager was found in serious condition.

The Ministry of Emergency Situations clarified that he had multiple fractures, extensive frostbite, and he was in shock.

Later, at about 03:22 Moscow time, the body of a woman with no signs of life was found under an avalanche.

Soon after the discovery of the body of the deceased, the Directorate of the Investigative Committee for the Krasnoyarsk Territory and Khakassia opened a criminal case on the death of a woman and injury to other tourists as a result of an avalanche.

“After establishing the initial circumstances of the incident ... a criminal case was initiated on the grounds of a crime under Part 1 of Art.

238 of the Criminal Code of the Russian Federation (provision of services that do not meet safety requirements), ”the ministry said in a statement.

After the discovery of the bodies of a man and a child, the Investigative Committee re-qualified the case under a heavier article (provision of services that did not meet safety requirements, which inadvertently entailed the death of two or more persons) "due to an increase in the number of deaths."

The investigation also establishes the ownership of the buildings that were hit by the avalanche.

The incident is also being verified by the Krasnoyarsk Territory Prosecutor's Office.

The department said that prosecutors at the scene are coordinating the work of law enforcement agencies to determine all the circumstances of the incident.

The Central Siberian Department for Hydrometeorology and Environmental Monitoring said that experts predict avalanche danger in the Krasnoyarsk Territory, Khakassia and Tuva until Monday.

It is noted that the warning was published on the agency's website even before the avalanche in Norilsk.

Recall that in March 2020, one climber died and two were injured as a result of an avalanche in the Khibiny Mountains in the Murmansk region.

The Ministry of Emergency Situations found that during a planned ascent of climbers along the route, one of the groups caused an avalanche, under which a bunch of three athletes fell.

In December 2019, due to an avalanche in Chukotka near the village of Egvekinot-1 (Ozerny), a snowboarder died.

The athlete got in touch before the avalanche descended, announcing plans to descend.

Volunteers and heavy equipment were looking for him.

The meteorological service noted that in this area it was the largest avalanche in the last 35 years.

In some areas, the height of the snow cover exceeded 10 meters.

In May 2019, in the Altai mountains, an avalanche killed seven tourists, who were part of a group of nine people.

Before starting the route, the tourists were registered.

The incident took place during the ascent to the South Chuisky ridge.

The survivors were two girls.