Trump will not attend the oath: 3 precedents in American history

Before Donald Trump there were three presidents in US history who refused to attend their successor's inauguration: the last was Andrew Johnson in 1869 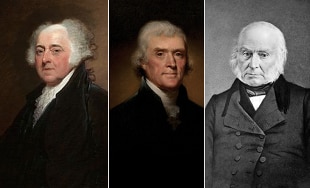 January 08, 2021 Before Donald Trump there were three presidents in US history who refused to attend their successor's inauguration: the last one was Johnson in 1869.

was impeached by the House of Representatives and acquitted by the Senate, but with his successor Ulysses Grant there was a mutual hatred, to the point that the latter refused to get into the carriage with him to go to the inauguration ceremony.

So Johnson stayed in the White House to sign the latest laws.

Previously, the big rejection involved John Adams and his son John Quincy Adams, both of whom came to the presidency.

, second second president of the United States, in 1801 did not participate in the inauguration of the third, Thomas Jefferson because the Federalists of Adams considered the Democratic-Republicans like Jacobins and the electoral campaign had been very tough.

, sixth US president, was not present at the inauguration of Andrew Jackson (one of the founders of the Democratic Party), at the end of another very harsh campaign.

After the election, Jackson's wife died of a heart attack after learning of the accusations made against her husband (which also involved the family sphere) and the president-elect refused to visit his predecessor in the three weeks before taking office.

A fourth case concerns Richard Nixon who resigned as president in 1974 over the Watergate scandal and did not witness the swearing-in of his successor, Gerald Ford, the first to join the White House without ever having been elected.