The outgoing US President Donald Trump called yesterday for "reconciliation and healing", after his supporters stormed the Capitol building last Wednesday and wreaked havoc on it, stressing that he wanted a "smooth transition" of power to an administration succeeded by President-elect Joe Biden, and said it's a 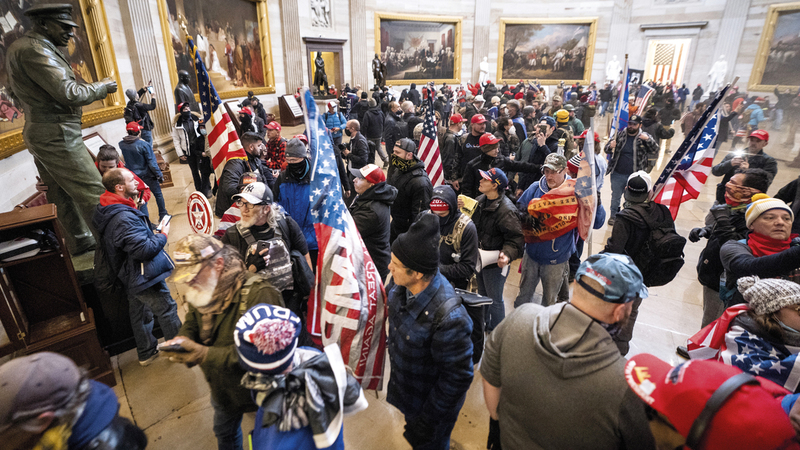 Supporters of Trump during the storming of the "Congress" building.

The outgoing US President Donald Trump called yesterday for "reconciliation and healing", after his supporters stormed the Capitol building last Wednesday and wreaked havoc on it, stressing that he wanted a "smooth transition" of power to an administration succeeded by President-elect Joe Biden, and said He will not attend the inauguration of his Democratic successor, on January 20, while the Speaker of the US House of Representatives, Nancy Pelosi, confirmed yesterday that Congress will "move" if President Donald Trump does not voluntarily step down, and announced that she discussed with the military ways to prevent Trump from using Nuclear symbols.

"A new administration will be installed on January 20," Trump said in a video clip he posted on his Twitter account.

My focus is now on ensuring a calm, orderly, and smooth transition of power.

This moment requires healing and reconciliation ».

He added that he was "indignant at the acts of violence, lawlessness and chaos" committed by his supporters at the headquarters of Congress, where a woman was shot dead during clashes between them and the security forces when they stormed the Capitol to prevent lawmakers from endorsing Biden's victory.

"To those who have committed acts of violence or destruction, you do not represent our country," Trump said, addressing the Capitol intruders.

For those who break the law, you will pay the price. ”

Trump's message came shortly after a White House spokeswoman announced that he and his administration condemned "in the strongest possible terms" the violations that took place Wednesday.

"I want to be clear: the acts of violence that we witnessed in the Capitol were horrific, reprehensible and contrary to American values," Kelly McKinani said in a brief statement, stressing that "the president and his administration condemn them in the strongest possible terms."

"To all of those who asked, I will not go to the inauguration on January 20," Trump said on Twitter.

This was the first condemnation issued by the White House of what the Congressional headquarters witnessed, last Wednesday, of the violation of its sanctity and sabotage by supporters of Trump, who in the midst of those events only broadcast a short video clip, in which he addressed his supporters whom he assured them that he "loves them", and called them to "Return to their homes", while stressing at the same time that the elections were "stolen" from him.

The day before yesterday, Trump issued a short statement, committing to an "orderly" transfer of power, reaffirming his "complete disagreement" with the election result.

For his part, US President-elect Joe Biden said, in a speech from his stronghold in Wilmington, Delaware, that "yesterday in my view was one of the darkest days in our history", describing those who participated in the riots that took place in the Capitol as "terrorists."

Biden accused Trump, the day before yesterday, of launching a "relentless attack on democratic institutions."

As the hours of day passed, voices were raised to impeach Trump less than two weeks before the end of his term.

The leader of the Democrats in the Senate, Senator Chuck Schumer, called on Vice President Mike Pence to impeach Trump because he “incited” his supporters to storm the Capitol.

In turn, House Speaker Nancy Pelosi called for the president to be removed, saying that this step is a "critical matter of urgency," and warning that if Trump is not granted under this constitutional mechanism, Congress is ready to launch a mechanism to impeach him through a parliamentary trial.

A source familiar with the matter said there were discussions in the White House about Trump leaving Washington on January 19.

The source said he was expected to travel to his resort in Florida.

The New York Times reported yesterday that Pence opposes resorting to the 25th amendment to the constitution to force Trump to step down from office, despite the demands of Democrats and some Republicans.

While Pence did not speak publicly about the possibility of resorting to this amendment, which was not previously used in American history, the newspaper quoted a source close to Pence as saying that the vice president opposes this radical step.

The newspaper said that Pence's position is supported by many ministers whose support will be necessary to implement the 25th amendment.

The newspaper added that these officials "believe that such a measure would increase the current chaos in Washington," rather than dissolve it.

Yesterday, US Education Secretary Betsy DeVos became the second member to announce his resignation from the Donald Trump administration, after storming the Capitol.

Hours earlier, US Transportation Secretary Eileen Chow announced her resignation from her post, the day after Trump supporters stormed the Capitol.

In a statement posted on her Twitter account, Zhao said that she took this step, because what happened in the Capitol was "a traumatic event, and it was completely avoidable, and it bothered me so much that I cannot ignore it."

The capitol police chief submitted his resignation, the day before yesterday, the day after Trump supporters stormed the Congress headquarters, according to what a source close to him announced.

A Capitol police officer died of wounds sustained during clashes with a crowd of President Donald Trump's supporters, who stormed the Capitol building.

The day before yesterday, US Secretary of State Mike Pompeo responded to "many people" who likened the United States to a banana republic, including former President George W. Bush, after supporters of Trump stormed the Capitol building.

Pompeo, who is close to Trump, said in a message on Twitter that "this slander reveals a misunderstanding of the banana republics and democracy in America."

The New York Times: Trump is looking to issue a pardon for himself

The New York Times said yesterday that US President Donald Trump said that he was considering pardoning himself, during discussions with his aides since the presidential elections that took place last November.

The newspaper quoted two sources familiar with the discussions, which it did not name, talking about what could be an exceptional use of the president's powers by Republican Trump, who lost the election to his Democratic rival, Joe Biden.

"Mr. Trump told his advisers during several discussions since Election Day that he was considering granting a pardon for himself, and he asked on other occasions whether he should (do so) and about the legal and political impact of this on him," the newspaper said, quoting the two sources.

The newspaper said it was not clear whether Trump had discussed the matter since his supporters stormed the Congress building last Wednesday, prompting calls to remove him from the post.

Biden is naming more people on his economic team

The Biden team said in a statement yesterday that "with the announcement of more than 20 candidates" to hold ministerial posts, President-elect Biden is presenting "the most diverse administration in American history."

The transition team’s statement said that the new officials ’priority will be“ getting us out of the worst jobs crisis in nearly a century, ”strengthening unions, and“ rebuilding the backbone of America, our middle class. ”

leader of the Democrats in the "Senate", Senator Chuck Schumer, called on Mike Pence to dismiss Trump because he had "incited" his supporters to storm the Capitol.