Analysis: Trump is unlikely to be ousted prematurely

Trump's words about an orderly transition should ensure a few quiet weeks leading up to January 20th. But can the United States really trust an unpredictable president with fewer and fewer friends? Still, President Trump is unlikely to be ousted prematurely. 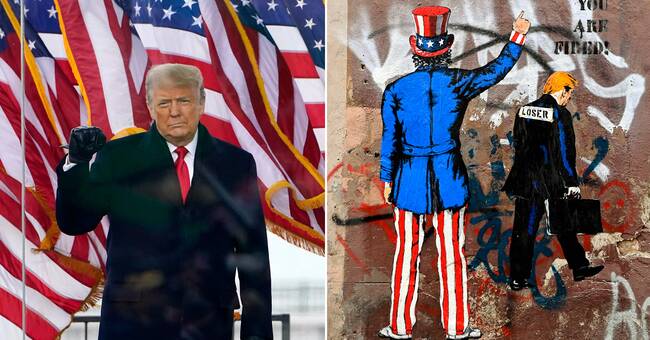 A surge of criticism comes from heavy party friends and several of the president's closest associates have already resigned.

Both Democrats and Republicans agree that Donald Trump bears the crucial responsibility for the chaos that put security at risk for the country's leading politicians.

And the president who, like no other, has survived through strange decisions and storms of criticism, this time has a political price to pay.

The rescuer got enough

Few have stood as loyal to the capricious president as Mike Pence.

The vice president has been the politician who, with his statesmanlike style, saved Trump through a heavily questioned handling of the pandemic and numerous statements that did not correspond to the truth.

But when his mission was to go against the constitution and invalidate electoral votes to prevent the appointment of Joe Biden- Pence had had enough.

Instead, the Vice President spoke of a dark day and that democracy must be at the center.

And more and more former Trump loyalists are now turning away from the country's 45th President.

The storming of Congress became too much.

Rumors in Washington claim that parts of Trump's inner core of the government would be prepared to invoke the 25th Amendment to the US Constitution, in order to get Donald Trump fired prematurely.

Such an attempt would be a political bomb and at the same time reject large parts of the Republican Party, which until the very end stood by Donald Trump's side.

But at the same time, he immediately got a taste of criticism that that reaction came far too late.

In addition, a majority of the government and the vice president are required to agree that Trump does not possess the ability to govern the country.

And Donald Trump has great potential to formally oppose such an ambush and too much is at stake for the Republican Party for such a high stakes game.

Trump will now be a very different ex-president.

There is no indication that Donald Trump intends to stay away from the political debate - no matter what platform he has.

And the question is who or what can reach out to the "forgotten" voters who last night turned the US political stronghold into a battlefield?