Nerazzurri punished 2-1 by former Candreva and Keita Baldé; too late de Vrij's goal (Sanchez misses the penalty 0-0). The Giallorossi pass 3-1 in Crotone. The green-and-blacks punished Genoa 2-1, while the orobics beat Parma with a sharp 3-0 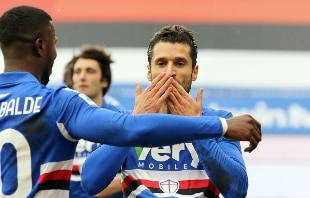 06 January 2021Inter was looking for the ninth win in a row, but found the defeat at Sampdoria: 2-1 for Ranieri's team. Milan, in the postponement with Juventus, remains in the lead. Roma is approaching, third, strolling in Crotone. Sassuolo and Atalanta also did well. Lazio returns to success, at the expense of Fiorentina. Draws in Bologna-Udinese and Turin-Verona. These are the responses of the matches at 3 pm of the 16th matchday of Serie A, all on the day of the Epiphany.

After two defeats against Roma and Sassuolo, the blucerchiati hit a highly prestigious success, denying the nerazzurri the ninth consecutive success.

Ranieri gives Quagliarella a rest, forward there is Damsgaard in support of Keita Baldé.

Conte does not risk the bruised Lukaku from the start and relies on Sanchez and Lautaro Martinez in attack;

in midfield, Gagliardini preferred to Vidal, author of some unconvincing performances.

At the 4th corner of Sanchez, Škriniar's side for Lautaro who sends out at the far post.

At 8 'a right turn by Young engages Audero, then at 9' Škriniar kicks to the side: in the action there is a touch of Thorsby's hand that Valeri detects at the Var, but Sanchez wastes by having the penalty rejected by Audero, picks up Young who hits the crossbar: bad luck Inter (11 ').

In the quarter of an hour Samp equalized the wood count with Tonelli who crowns a free-kick from Candreva on the crossbar.

There is not a moment of rest.

At 16 'Valeri whistles a penalty for the Dorians for a hand ball by Lautaro, but the Var shows that the touch is out of the area.

At 22 'another “yellow” for Barella's hands on Keita's header, Valeri consults the images and decrees the maximum punishment for the hosts that the former Candreva achieves by displacing Handanović (23').

At 26 'Lautaro sends Young's free-kick out of his head from a favorable position.

At 38 'Sampdoria doubled by Keita who finalized a great action by Damsgaard.

Recovery of the first fraction of the Nerazzurri, but Audero closes on the blow of Sanchez and Lautaro does not hit the target.

At 47 'and 51' still Lautaro and Sanchez wasteful.

In the 54th minute, however, Handanović saved Inter from Jankto's close shot.

At 63 'Conte risks Lukaku, in place of Gagliardini.

In the 65th minute, de Vrij reopened the game with a header from Brozović's corner.

Inter believes in it and in the 73rd minute Audero flies to deny Lukaku the goal.

At 78 'always Perišić tries with his head, then at 79' it is Lautaro's turn, but the Dorian goalkeeper keeps a good guard at the near post.

At 83 'it is still Perišić who misses the target with his head.

At 95 'in the scrum Bastoni "butt" the ball a stone's throw from the door.

It is the last gasp.

The Giallorossi's march towards the upper floors continues, Inter is now in the sights 3 points above.

A very complicated situation for the Calabrian rossoblù, last alone: ​​nine goals scored by Inter and Roma in the last two games.

Stroppa, still without Benali and Cigarini, in attack benefits from the return of Simy alongside Messias.

Fonseca, who reached the team after the negative buffer, rests Veretout, Pellegrini and Džeko, lining up Cristante, Perez and Borja Mayoral in their place.

The Giallorossi advantage with Borja Mayoral in the 8th minute at the suggestion of Mkhitaryan.

Between 26 'and 28' triple chance for Crotone, but Simy and Messias fail to score.

Borja Mayoral does it again on 29 'with a surgical right at the corner of the posts.

At 33 'the Spaniard is landed in the Calabrian area by Golemić, Piccinini decrees the penalty that Mkhitaryan transforms with a shot too angled for Cordaz (35').

The recovery is played on a softer pace.

At 70 'Crotone is seen but Pau Lopez closes a corner on Messias.

The Rossoblu's goal came a minute later on the corner with a shot from Golemić.

At 86 'Bruno Peres saves on the line after Simy's conclusion.

The Grifone pays the price, in a very painful situation in the standings, with just 11 points in the penultimate place.

Boga brings Sassuolo forward with a left in the 52nd minute.

Red and blue draw in the 64th minute with a close header from Shomuridov from a cross from Ghiglione.

The green-and-blacks are pushing for success.

Defrel's post in the 78th minute, then in the 83rd minute comes the winning goal of the under-21 national Raspadori, primed by Boga.

At 92 'a goal from Destro was canceled for offside.

After the five points against Sassuolo, another great success for the orobic Nerazzurri.

For Parma he is very poor.

Gasperini in defense recovers Toloi, forward relies on Iličić and Muriel with Pessina as a finisher.

Unfortunate Liverani: Karamoh gets hurt immediately, Mihaila replaces him in the 10 ', who goes to make an attack couple with English.

In the quarter of an hour, orobici in advantage: Iličić finishes for Muriel who makes Sepe dry.

At the start of the second half, Zapata blocks the result by beating Sepe on an assist from Gosens (48 ').

The German scored in the 61st minute, taking advantage of a pass from Zapata deflected by Hernani.

Another chance for the Nerazzurri war machine with Maehele and Miranchuk.

Mihaila tries for Parma, Gollini is not surprised.

Simone Inzaghi's team returns to smile, which does not shine in the league after qualifying for the knockout stages of the Champions League.

The Viola's positive streak ends after four rounds without defeat.

Inzaghi with Escalante, Milinković-Savić and Luis Alberto in support of Caicedo and Immobile.

In Prandelli's 3-5-2, Ribéry and Vlahović are the offensive terminals.

At 5 'biancocelesti already in the lead: Acerbi hits, Milinković-Savić makes the bank for the right to the flight of Caicedo who strikes Drągowski.

On the empty exit of the purple goalkeeper, Marušić with his head splinters the outside post (8 ').

At 26 'a goal from Immobile was canceled for offside.

The viola are seen in the 28th minute but Strakosha closes Vlahović's blow at the near post.

In the second half, Immobile caught the goal in the 75th minute with a powerful shot on the development of a corner.

Purple chances with Vlahović and Castrovilli, but save Strakosha (69 ') and Milinković-Savić (78').

At 87 'penalty for Fiorentina: Hoedt holds Vlahović who successfully undertakes the transformation (88').

But it is too late for the comeback.

Draws in the other two games at 15. Ends 2-2 between Bologna and Udinese: Tomiyasu takes the rossoblù ahead with a header from Orsolini's free-kick in the 19th minute.

Equal to Pereyra with a tap in the winner after being rejected by Da Costa after a shot by De Paul in the 34th minute.

New advantage for Mihajlović's team with Svanberg on Barrow's assist in the 40th minute.

When Bologna's success seemed to be done, Arslan's final equalizer in the 92nd minute.

The 1-1 between Turin and Verona bears the signatures of Dimarco (great left-footed shot after a deep throw by Zaccagni, 67 ') and Bremer (who pounces on a wrong push by Faraoni on Verdi's cross, 84').