Coronavirus. In Germany, almost 12,000 new cases, 944 deaths: lockdown is expected to be extended

Chancellor Angela Merkel will have a videoconference with the premier of the 16 laender during the day. Meanwhile, Mexico has granted emergency clearance for AstraZeneca's coronavirus vaccine. In Japan, the sumo champion, Hakuho, is infected. In Russia 518 deaths in 24 hours 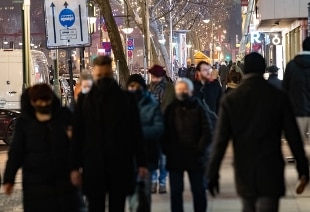 The Robert Koch Institute announced this, while today Chancellor Angela Merkel will have a videoconference with the premier of the 16 laender to discuss the extension of the lockdown from January 10 presumably to 31. Based on the latest update, coronavirus infections in Germany there are 1,787,410, while the deaths 35,518.

We should be able to ease lockdown measures in March

The British government "should be able" to begin easing restrictions from the UK lockdown against the coronavirus in March.

Gove added that citizens should not expect a sudden relaxation of the measures against Covid-19, but the restrictions will be eased "gradually".

Government chief of pandemic strategy, Hugo Lopez Gatell, announced on twitter that the federal commission for the protection of health risks "has authorized AstraZeneca's vaccine for its emergency use against the SARS virus. CoV-2 ".

Worldwide, authorization for the vaccine developed in British laboratories has come from the UK, Argentina and India so far.

Mexico on 24 December launched the vaccination campaign with the serum produced by Pfizer-Biontech and so far about 30 thousand people have been vaccinated.

President Andres Manuel Lopez Obrador says that between 700 and 750,000 people employed in the health sector will be vaccinated by mid-January.

The United States remains the country in the world most affected by the coronavirus pandemic.

There are 20,815,571 cases of Covid-19 registered in the country and 353,483 deaths, according to data released by Johns Hopkins University.

To announce the discovery of this strain of coronavirus, which would be more contagious than those already known, was Governor Andrew Cuomo, according to whom the 'English variant' was diagnosed in a sixty year old who lives in Albany, in the north of the state.

The recovering man has not traveled overseas recently.

The presence of the variant had so far been confirmed in Colorado, California and Florida.

Russia has recorded 24,246 cases of Covid-19 and 518 deaths related to the virus in the last 24 hours, according to the latest official bulletin.

Moscow remains the area most affected by the pandemic with 4,842 cases in one day and 75 deaths, followed by St. Petersburg.

National data is slightly up compared to yesterday, when 23,351 infections and 482 deaths were confirmed.

Thirty-five-year-old of Mongolian origins, Hakuho tested himself after losing his sense of smell, the Japanese Sumo Association (JSA) said.

The athlete was preparing for the so-called New Year championship, which starts Sunday in Tokyo;

for now, the JSA said, no decision has been made on its participation.

The news comes as the Japanese authorities are considering declaring a state of emergency in the capital area, where infections are on the rise.

Activities such as wrestling and sumo have continued despite the pandemic, but cases of Covid-19 in sport have also emerged in parallel.

In May, a 28-year-old Japanese sumo athlete died from complications caused by the coronavirus.

of people aged 75 and over in nursing homes in France will be authorized by the end of January.

This was announced by the French Minister of Health, Olivier

Ve'ran. "There are 5 million people", said the minister interviewed by RTL, announcing the extension of the vaccination campaign - for now reserved for residents of nursing homes and operators of at least 50 years - also to firefighters and home assistants over 50