The Court of Appeal in Abu Dhabi upheld a ruling of the first instance court requiring a car insurance company to compensate a demanding delivery worker who suffered a traffic accident on the part of a driver of an insured car with an amount of 150,000 dirhams, and sustained a permanent disability in the lower left end. 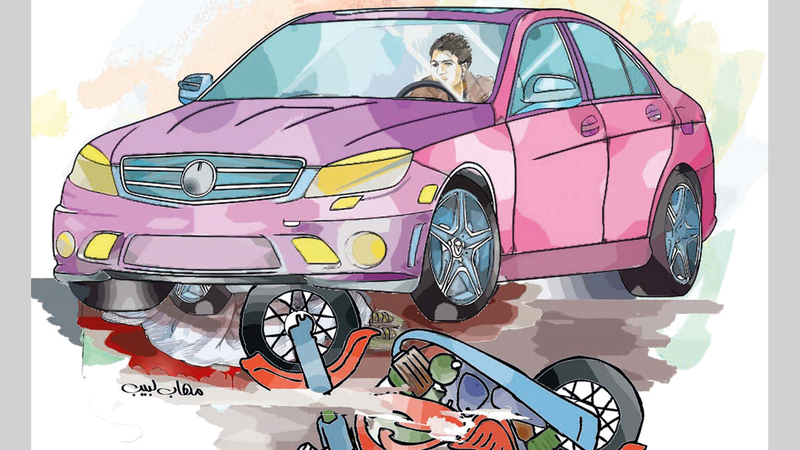 He had a traffic accident ... and he was left with a permanent disability rate

The Court of Appeal in Abu Dhabi upheld a court ruling of first instance requiring a car insurance company to compensate an application delivery worker who was involved in a traffic accident on the part of a driver of an insured car with an amount of 150,000 dirhams and sustained a permanent disability in the lower left limb.

In the details, a delivery worker filed a lawsuit before the Abu Dhabi Commercial Court of First Instance, against an insurance company, which sought at its conclusion to oblige the defendant to pay him 120,000 dirhams the value of material, moral and future compensation for the damages incurred by him with the legal interest at 9% from the date of the judgment becoming final Until full payment, and obligating the defendant to pay the case's fees and attorney fees.

He pointed out that he had suffered an accident caused by the captain of the insured vehicle with the defendant, which resulted in several injuries to him. The driver was found guilty and a final criminal judgment was issued against him.

The report of the forensic doctor, delegated from a court of first instance, showed that the plaintiff had suffered a traffic accident, and had a permanent disability percentage in the left lower extremity that was 45% of its original nature, and that he would not be able to do his work as before (deliver sales) at the same level to require a ride bicycle.

The worker's defense presented a memorandum, at its conclusion seeking to oblige an insurance company to pay him 120,000 dirhams the value of material, moral and future compensation for all damages suffered with the legal interest at 9% from the date of the judgment becoming final until full payment, and obligating the defendant to pay the lawsuit fees, and in return lawyer's charge.

The insurance company submitted a reply memorandum, through which it argued that the case was not accepted for not resorting to the competent insurance committees, and the judgment dismissed the case in more than 45,000 dirhams, and a court of first instance ordered the defendant to pay the plaintiff 150,000 dirhams, and obligated the defendant to pay the fees, fees and compensation Fees and other requests refused.

The two parties did not accept that court, so the defendant challenged it before the Court of Appeal with a memorandum at the end of which it requested that compensation be limited to an amount of 45,000 dirhams only, with the appellant charged with fees and charges.

The memorandum blamed the judgment for its error in applying the law, its failure to cause it, and the corruption of its reasoning, as it combined compensation for moral damages and assessed damages, in contravention of the text of Article 299 civil transactions, and also described the judgment that it had decided to pay compensation that exceeds the harm caused.

The plaintiff appealed against the judgment by requesting a memorandum at its conclusion to accept the appeal in form, and in the matter to increase the sentenced amount by an amount of 50 thousand dirhams in addition to the sentenced amount with the legal interest at 9% from the date of the judgment becoming final until full payment, with the appellant obligating the expenses with the appellant to be charged Against it, fees and charges.

He mourned that the judgment was not equivalent to the damages he sustained, represented by permanent disability and fracture of the shin bones, which were treated with metal nails, in addition to the wounds on the left and right foot and were treated with surgical stitches.

The court clarified that the plaintiff deserves comprehensive compensation for the damages suffered by him, including the material damages described in the report, the moral damages that were represented in the psychological and physical pain of the plaintiff, in addition to the future pain and heartbreak of the plaintiff due to the permanent disability.

She affirmed that the findings of the court of first instance commensurate with the damage suffered by the appellant, and that it does not see a reason to intervene in his regard in support of serving the first degree, and it has decided to accept the two appeals in form, and in their subject matter rejecting them in support of the ruling, and obligating each appellant to pay expenses including attorney fees.

plaintiff deserves comprehensive compensation for the damages caused to him ... including material damages.