India agreed to use the AstraZeneca and Oxford University vaccine to prevent Coronavirus, paving the way for a massive vaccination campaign in the world's second most populous country, starting with the vaccination of 30 million frontline workers in the first phase. While the government announced Greece 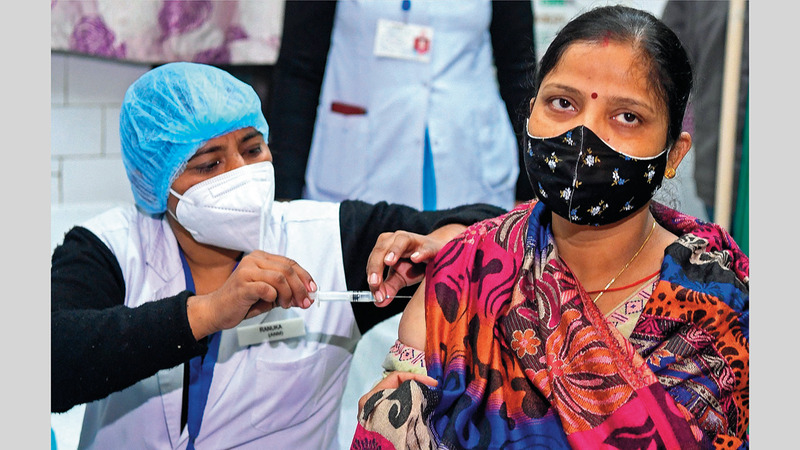 Greece extends the lockdown by 10 days ... and Japan postpones the emergency declaration in Tokyo

India is running a simulation of the vaccination process against "Covid-19" before launching its massive campaign.

India agreed to use the AstraZeneca and Oxford University vaccine to prevent Coronavirus, paving the way for a massive vaccination campaign in the world's second most populous country, starting with the vaccination of 30 million frontline workers in the first phase.

While the Greek government announced the extension of the strict two-month lockdown in the country until January 10, the Japanese central government refrained from declaring a state of emergency in Tokyo and three neighboring provinces.

In detail, Indian Information Minister Prakash Javadekar told reporters, yesterday, that the government approved the emergency use of a vaccine produced by AstraZeneca, in cooperation with the University of Oxford, to prevent the emerging corona virus.

This is the first vaccine that the relevant authorities agree for emergency use in India, which has the second highest number of infections in the world after the United States.

The news comes on a day when the country is conducting mock training to distribute a vaccine.

"India is probably the only country that has at least four vaccines ready," he said.

"One of them has received approval for emergency use, and it is the Coffeeshield vaccine produced by the Indian Serum and Vaccine Institute," he said, noting that the institute is the one that manufactures the AstraZeneca-Oxford vaccine locally.

India conducted a simulation of the vaccination process across the country yesterday, before launching this week, perhaps a massive vaccination campaign against the emerging corona virus.

The simulation mainly involved training health care workers in dolls at centers specially created for the upcoming vaccination campaign across the country.

India, the country most affected by the emerging corona virus after the United States and Brazil, aspires to vaccinate about 300 million people by mid-2021.

The government is also finalizing plans to vaccinate another 270 million people, who will be prioritized, including the elderly, by next July.

India recorded 19,79 new cases of Coronavirus yesterday, which brings the total number of infections to 10 million and 305 thousand and 788 cases, according to the Indian Press Trust of India, quoting the Indian Ministry of Health.

The ministry added that the death toll from the virus jumped to 149,218 deaths in the country, with 224 new deaths recorded, according to the ministry's data.

In Athens, the Greek government announced yesterday that it has renewed the strict lockdown that has been in effect for two months in the country until January 10, and thus stopped work by easing measures on the occasion of New Year holidays.

Greek government spokesman Stelios Petsas said that the strict measures, which were due to end on January 7, "will start again from Sunday to January 10 for precautionary reasons."

He indicated that the aim is not to aggravate the situation and to be able to reopen schools on January 11th.

For its part, the Japanese central government has refrained from declaring a state of emergency in Tokyo and three neighboring provinces, despite the local authorities ’request to the minister responsible for confronting the Corona virus, Yasutoshi Nishimura, to do so to contain the outbreak, which shows no significant indications of its decline, according to Bloomberg. »For the news yesterday.

The Japanese government decided to hold consultations with experts again before issuing a decision, according to the minister, at a press conference, after a three-hour meeting with governors from Tokyo and neighboring provinces.

"We agreed that the capital region is in a serious enough situation to impose a state of emergency," she added.

The application issued by the four referees will be studied. ”

In France, the weekend of the first week of the new year began in a bleak weather, after the French government extended curfew hours in 15 administrative regions to contain the accelerating spread of the Corona virus.

According to the government decision, a night curfew has been imposed in 15 of the 101 administrative regions that make up France.

In order to deal with the alarming number of injuries, especially in the east of the country, curfew hours have been extended in 15 provinces.

As of yesterday, about six million French will not be able to leave their homes after 6 pm in the eastern part of the country, except in exceptional cases.

In the United States, confirmed cases of the emerging coronavirus increased by 0.8% within 24 hours, to reach 20.1 million cases, according to data from Johns Hopkins University and Bloomberg News.

The increase at the national level was less than the average increase over the past week, which is 1%.

In Brazil, the total number of confirmed cases of coronavirus has reached 7.7 million, according to data compiled by Johns Hopkins University and Bloomberg News.

For its part, Russia recorded 26,301 cases of Coronavirus yesterday, in addition to 447 deaths during the past 24 hours, down from 27039 cases and 536 deaths in Friday's statistics.

The start of a tight curfew for six million French to contain the spread of Corona.

Millions of the total number of confirmed cases of coronavirus in Brazil.