Real Madrid is chasing him and Barcelona looking for the impossible .. Suarez leads Atletico's dream to the absent LaLiga title

With the start of the 17th round of LaLiga matches tomorrow, Saturday, leaders Atletico Madrid are looking forward to the continued brilliance of Luis Suarez and to continue to advance towards the podium for the first time in 6 years, taking advantage of the weaknesses of Real Madrid and Barcelona. 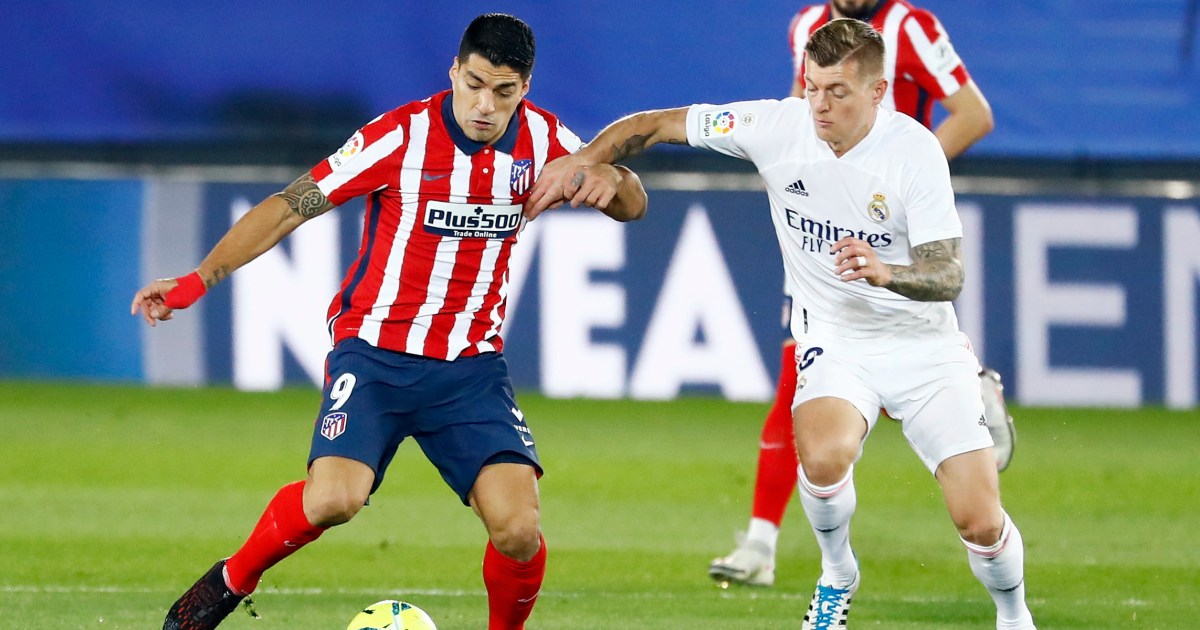 With the start of the 17th round of the Spanish Football League tomorrow, Saturday, leaders Atletico Madrid are looking forward to the continuation of the brilliance of their scorer Luis Suarez and to continue to advance towards the La Liga podium for the first time since 2014, seizing the opportunity of Real Madrid and Barcelona.

After Suarez left Barcelona, ​​the Uruguayan star is living a good new life within the ranks of Atletico, and he led the team with his scoring brilliance to the top of the Spanish League, two points ahead of Real Madrid, second-placed, knowing that Atletico have two postponed matches.

We will meet next year, God willing 😃 pic.twitter.com/O5N7kBzLDP

Atletico, coached by Diego Simeone, entered the new year at the top of the league, looking to consolidate the lead through its scheduled match against Deportivo Alaves on Sunday evening in the 17th round of the League.

Atletico Madrid last won the league title in 2014, after which Real Madrid and Barcelona dominated the title.

At a time when Atletico and scorer Luis Suarez, 33, go through a glory stage, things are not going as giants Real Madrid and Barcelona hope.

Real and Barcelona tied 1-1 with Elche and Eibar, respectively, this week, while Atletico Madrid beat Getafe 1-0, with Suarez scoring the winning goal.

Suárez raised his score to 8 goals this season to share Karim Benzema of Real Madrid and Gerard Moreno of Villarreal second place in the list of scorers in the league, followed by Lionel Messi of Barcelona and Mikel Uiarzabal of Real Sociedad with 7 goals each, while Celta Figo's player Ayago Espace is unique With 9 goals.

Suárez scored his goal against Getafe to guide Simeone to victory in his 500th game at Atletico Madrid, and the coach asked his players to keep the rhythm when facing Alaves.

Simeone said that maintaining consistency and rhythm in all matches is not an easy thing, adding that "the opponent also plays games and has goals that he needs to achieve, and the day when you do not appear at a good level, you must try to win as well."

Summary of the tie of "Elche" and "Real Madrid" in their last match of 2020 📺 # ElcheRealMadrid 1-1 pic.twitter.com/4DRoajCdob

Real Madrid, trained by Zinedine Zidane, host Celta Vigo on Saturday, and the royal team can grab the lead, even if temporarily, by winning.

Zidane said, "We have to continue and keep working hard. All the teams will waste points, as these competitions in the league are very difficult. We are doing well, and there is still a long way to go."

As for Barcelona, ​​who is coached by Ronald Koeman, he will visit Huesca on Sunday evening, and the match is expected to witness the return of star Lionel Messi from a problem he was suffering from in the ankle.

Messi, who spent time off in Rosario, Argentina, watched the match against Eibar from the stands.

Barcelona ranks sixth, 10 points behind Atletico Madrid, and Koeman admitted that winning the title might be a difficult task for his players.

"I am realistic, winning the title seems complicated, nothing is impossible, but we have to understand the difference. Atletico looks very good. They are a very strong team and they do not concede many goals," Koeman said.

Osman Dembele made a successful comeback from injury, scoring the equalizer for Barcelona against Eibar, and is expected to take part in the match against Huesca, but the Catalan team still misses the efforts of Gerard Pique, Sergi Roberto and Anso Fati.

The 17th round matches will open tomorrow, Saturday, with Villarreal's meeting with Levante, Real Betis with Seville and Getafe with Valladolid, while on Sunday evening the meeting of Athletic Bilbao with Elche and Real Sociedad with Osasuna and Eibar with Granada, and concludes Monday evening with Valencia's meeting with Cadiz.