Knees on the ground, voice that carries: in 2020, the fight of US athletes against racism - France 24

Knees on the ground, voice that carries: in 2020, the fight of US athletes against racism Los Angeles (AFP) Speeches, boycott of matches, lobbying for the vote of blacks: in 2020, American sportsmen mobilized as never before to fight against racial injustice, until weighing in the election of Joe Biden to the White House. "At that point, we're all around the phone listening to our parents. And we're crying. We don't really know what the future holds. But we're doing the right thing." 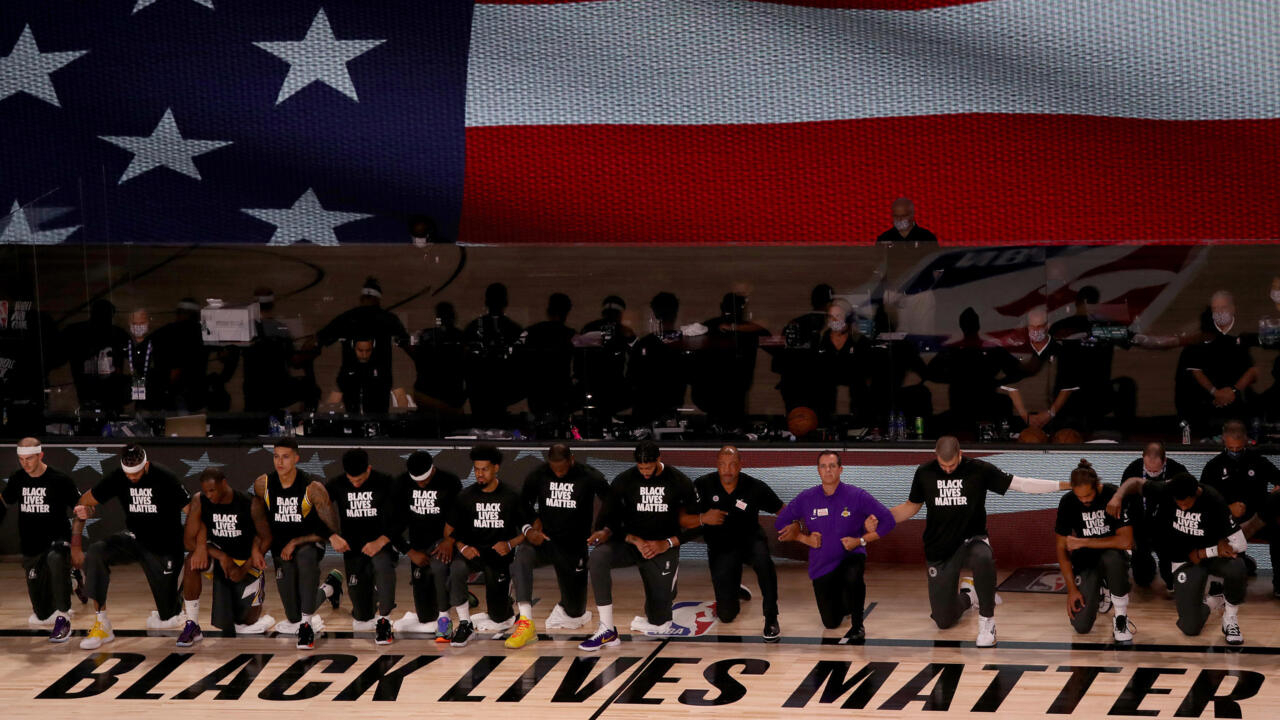 Speeches, boycott of matches, lobbying for the vote of blacks: in 2020, American sportsmen mobilized as never before to fight against racial injustice, until weighing in the election of Joe Biden to the White House.

"At that point, we're all around the phone listening to our parents. And we're crying. We don't really know what the future holds. But we're doing the right thing."

That "good thing" for basketball player Kyle Korver is the Bucks boycott of their NBA play-off game against Orlando on August 26.

Three days after Jacob Blake was shot several times in the back by a police officer in Kenosha, near Milwaukee.

Before this unprecedented protest movement in the history of American sport, it all started with a knee to the ground, three months earlier: on May 25, the world discovers the images of the unbearable ordeal of George Floyd, asphyxiated during 8 minutes and 46 seconds, during his arrest in Minneapolis, and died an hour later in the hospital.

LeBron James is the first personality to express his anger.

"Do you understand now !! ?? Or is it still blurry?", He wrote in the caption of a photo-montage comparing the fatal kneeling to Floyd with that of the ex-NFL star (American football) Colin Kaepernick, who protested in 2016 during the national anthem against police violence against blacks.

- Sportsmen in the street -

This gesture which cost Kaepernick his career, insults from Donald Trump as a bonus, finally became, four years later, one of the symbols of the fight against racial injustice.

So much so that even police officers kneel during demonstrations in favor of Black Lives Matter.

In Europe, knees on the ground are multiplying on football pitches in Liverpool, Dortmund, Madrid ...

Bubba Wallace, the only African-American driver of the very conservative NASCAR automobile championship, manages to have the Confederate flag, considered a racist symbol, banned around the circuits.

On the federations, leagues, franchises side, everyone has their press release between emotion and indignation, with more or less conviction.

Pressed by his stars, the boss of the NFL, Roger Goodell, apologizes for not having listened earlier to the players asking him to more firmly condemn racism and to support the protests.

Meanwhile, the NBA is preparing its recovery in the Disney World bubble.

Some, like Kyrie Irving (Nets), however, believe that the time is not for basketball but for social combat.

LeBron James, him, leads both: he creates the association "More Than A Vote", whose goal is to encourage the black population to vote in the presidential election.

“It's time for us to make a difference,” he says.

In the meantime, with his Lakers, he reopens the season on July 31 against the Clippers.

This return to the game is under the sign of Black Lives Matter, with knees on the ground, slogans on the back of the jerseys, calls for justice to be done.

But far from the bubble, systemic violence continues and the Blake affair is one too many.

The Bucks boycott is followed by the other teams, forcing the NBA to postpone six games.

Osaka refuses to play its semi-final of the tournament of Cincinnati, the organizers shift, decreeing a day without tennis.

Unheard of in American sport, which has yet had illustrious activists: Bill Russell, Jackie Robinson, Mohamed Ali ... To the point that Trump criticizes the NBA for having become "a political organization".

After bitter discussions, the play-offs resume their rights.

Advised by Barack Obama, the players are forcing franchise owners to get involved in their struggle.

Facilitating access to the vote by making the rooms available is one of the key measures of this action plan.

In the end 23 clubs out of 30 were able to keep this commitment, imitated by 16 of the 32 NFL franchises.

It had an impact: in Michigan and Wisconsin to name just the two key states that Biden won, black participation increased significantly from 2016, in counties where the Pistons Room is located and Bucks, having served as a place of voting or deposit of advance ballots.

The night when Biden's victory was no longer in doubt, LeBron James, NBA champion a month earlier with the Lakers, congratulated himself on having played a role with "More Than A Vote".

But "the fight is not over," he told The New York Times.

"He must continue, we know that. We fight every day to be heard and respected."

These words also had an echo with French athletes who also made themselves heard.

Like the 2018 world champion Kylian Mbappé, on the occasion of the beating of a black music producer by the police, his teammate in blue Antoine Griezmann who broke his partnership with Huawei in support of the Uyghurs, or even the PSG players and Turkish club Basaksehir who left the field after racist remarks by the 4th referee.