The "Overlord" cold wave is sweeping, is coal and electricity enough? Authoritative response

Chinanews client, Beijing, December 29th (Reporter Li Jinlei) The Central Meteorological Observatory continued to issue a cold wave orange warning at 6 o'clock on December 29: Affected by strong cold air, most of my country's central and eastern regions will have strong winds and strong cooling. Under the influence of the "Overlord" cold wave, will electricity, natural gas, and coal be sufficien 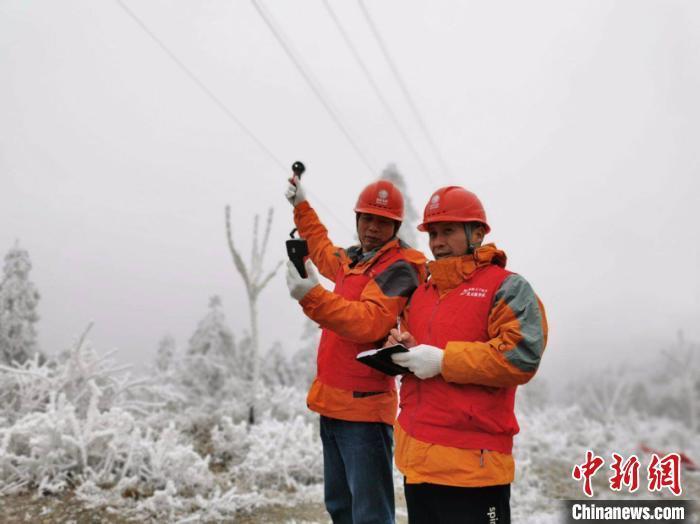 Under the influence of the "Overlord" cold wave, will electricity, natural gas, and coal be sufficient?

Let's see what the National Development and Reform Commission says.

On December 15th, employees of the State Grid Loudi Power Transmission and Maintenance Company inspected the 110 kV Yuelongyang line and monitored the ice on the line to ensure the safe and stable operation of line equipment.

Since the beginning of winter, power has been tight in some areas, and a new round of cold weather may cause a significant increase in the heating power load in the southern region. How to ensure power supply?

In this regard, the main person in charge of the Economic Operation Regulation Bureau of the National Development and Reform Commission pointed out that there will be continuous low temperature weather in the near future, and the national electricity demand is expected to rise.

In order to respond, the National Development and Reform Commission will work with relevant parties to ensure the power supply. First, we will further consolidate the responsibilities of local governments and enterprises to ensure the warmth of the people during the winter.

ensure that it does not involve people's livelihoods or residents.

In extreme cases, when implementing the plan, only limit electricity and not pull electricity.

The third is to highlight key points and do a good job in power supply.

The fourth is to improve the coordination mechanism.

It is reported that since the beginning of winter, the country's electricity demand has grown rapidly.

According to express data, the nationwide electricity generation and consumption have increased by about 11% year-on-year since December, and the growth rate has increased by 6 percentage points over the same period last year.

The above-mentioned person in charge said that the current power rationing in Hunan has basically resumed, and Jiangxi has no power rationing since December 19. Zhejiang has also corrected the practices of individual places, and the national power supply and demand situation has stabilized.

Cold weather will increase the demand for natural gas, and at the same time will have a certain impact on the work of natural gas supply.

How to deal with it?

The above-mentioned person in charge pointed out that from the current supply and demand situation, although there may be increased pressure to ensure supply in some areas and certain time periods, it is generally balanced, and the people's livelihood gas is guaranteed, which can ensure the people's warmth through the winter.

Specific measures to ensure natural gas supply include: First, do everything possible to increase resource supply.

The second is to focus on ensuring the heating and gas needs of the northern region.

The third is to give full play to the role of gas storage and peak shaving.

The fourth is to raise management and inventory to a high level.

Fifth, the organization will increase the "southern gas northward".

Sixth, it is to ensure that LNG ships arrive at ports in time for unloading.

Seventh, do a good job in ensuring supply and stabilizing prices.

Eighth is to organize an accurate and orderly "suppression of non-residents" plan.

Ninth is to coordinate and solve the individual problems that affect heating and gas supply in a timely manner.

According to reports, the middle section of the Sino-Russian Eastern Route has recently been put into operation, which can increase the supply of resources by more than 10 million cubic meters per day.

With the support of Guangxi and other places, the resumption of production at the Beihai LNG receiving station also provided protection for this round of cold weather.

The above-mentioned person in charge emphasized that during the heating season this year, the available gas storage capacity increased by about 5 billion cubic meters compared with last year.

At present, the daily gas supply of the seven key provinces and cities for clean heating in the north is about 470 million cubic meters, maintaining a double-digit growth, accounting for about 40% of the national gas supply, and the overall guarantee is relatively good.

Since the beginning of winter, especially in December, the demand for coal has increased. Is there any problem with the guarantee of coal supply?

The above-mentioned person in charge pointed out that since the heating season, the demand for electric coal has increased, but the supply is generally stable, which can meet the coal demand for production and life.

For the upcoming cold weather, we have made preparations in advance and formulated a thorough emergency plan for ensuring coal supply to ensure the warmth of the people through the winter.

One is to make every effort to increase production and supply.

The second is to accelerate the improvement of coal storage levels in power plants.

The third is to strengthen coal security in key areas.

The fourth is to organize emergency resources.

The fifth is to strengthen the emergency guarantee mechanism.

The coal storage of power plants in the national integrated regulation system has been maintained at a reasonable level of over 18 days.

In addition, for Hunan and Jiangxi, where the supply of thermal coal is relatively tight, coordinate the main coal producing areas and coal companies to provide resource guarantees for power plants with low levels of coal storage, and coordinate railway companies to optimize the transportation structure to provide maximum support.

At present, the available days of coal storage in key power plants in the two provinces are both at a reasonable level of 18 days.