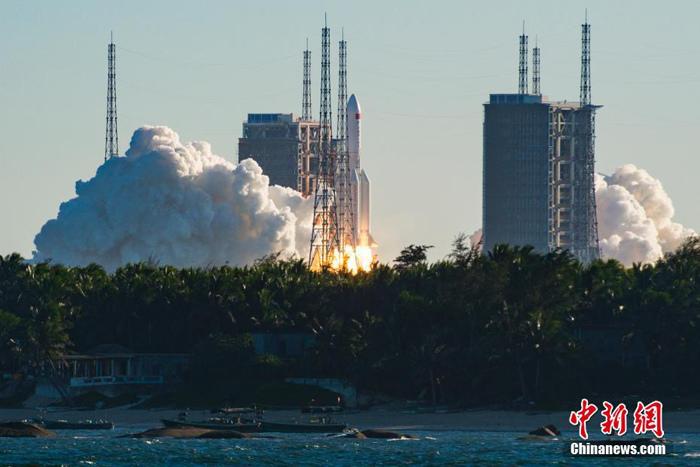 This year is coming to an end. Looking back on the course of this year, China Aerospace has fulfilled its mission.

In 2018 and 2019, China Aerospace ranked first among all countries in the world with 39 and 34 launches respectively for two consecutive years.

Up to now, China Aerospace has completed 38 launches this year.

At the time when Wuhan was "closed" and work was delayed nationwide, the Chinese astronauts never stopped their work.

The war "epidemic" did not stop, and the rocket lifted off again.

This is a "good start" for China Aerospace after the Spring Festival of the Year of the Rat in 2020, and it also adds a footnote to China's Aerospace "Super 2020".

Data map: The picture shows the Long March 5B carrier rocket ignited into the air.

On December 22, the Long March 8 launch vehicle completed its "first show", sending five satellites into a predetermined orbit with "one arrow and five stars".

What is even more exciting is that in this launch, the Long March 8 rocket has carried out a reusable and highly intelligent advanced technology verification; perhaps in the near future, it can change many of people’s dreams of future rockets. For reality.

While the "national team" is making great strides, the civilian-run rockets have also made major breakthroughs.

This year, China's "space journey" is even more distant.

"At the beginning of the ancient times, who preached? The top and bottom are not visible, why do you test it?" This is the "question from heaven" issued by the poet Qu Yuan more than two thousand years ago, which just confirms the Chinese people's concern for Mars for thousands of years. The intense curiosity of the Red Planet.

"Tianwen" detects the fire, and solves the "Yingzhuo".

As of now, the Tianwen-1 probe is more than 100 million kilometers away from the earth. It is expected to reach Mars in mid-February next year, and land on Mars in mid-May for patrol exploration.

China is expected to complete the three goals of "circumnavigation, patrol, and patrol" through a single task.

Compared with Tianwen-1, which flew for more than 7 months, the 23-day "journey" of Chang'e-5 is obviously more compact.

In the early morning of December 17, the Chang'e-5 returner successfully landed in the planned area of ​​Siziwang Banner in Inner Mongolia, bringing back the long-awaited lunar “local products”.

Since its launch on November 24, Chang'e 5 has gone through 11 stages of lunar ascent, rendezvous and docking, sample transfer, and reentry and recovery. It has achieved five "firsts" in the history of China's aerospace and brought back about 1,731 grams of lunar samples. The three-step development plan of China's lunar exploration project "circumnavigation, fall and return" has drawn a successful conclusion.

Since the establishment of the Beidou No. 1 project, for twenty-six years of ups and downs, several generations of Beidou people have continued to struggle, hundreds of thousands of builders have joined forces, and finally built "China's Beidou, the world's Beidou, and a first-class Beidou."

As Yang Changfeng, chief designer of the Beidou satellite navigation system, said, the Beidou system is the largest complex space system with the largest scale, the widest coverage, the highest service performance, and the most closely related to people’s lives in China.

Today, the new era Beidou builders who have taken over the historical baton have set a new goal: around 2035, they plan to build a more ubiquitous, more integrated, and smarter national integrated positioning and navigation timing system based on the Beidou system around 2035.

Another major special project closely related to the lives of the people-high scores also came with good news.

On December 6, the Gaofen 14 satellite was successfully launched at the Xichang Satellite Launch Center, officially announcing the successful completion of the construction of the Gaofen satellite special system.

From disaster monitoring to basic surveying and mapping, from environmental governance to earth observation, high-scoring data has been widely used in more than 20 industries and 31 provinces, autonomous regions and municipalities, and has become important data and technical support for various fields and departments of the national economy.

Looking at the calendar, the "report card" handed over by China Aerospace in 2020 is particularly eye-catching.

"Tianwen" and "Wanwu" were launched, and "Beidou" and "high score" ended...A series of dazzling data are also proclaiming that this year China Aerospace deserves the reputation of "Super 2020".