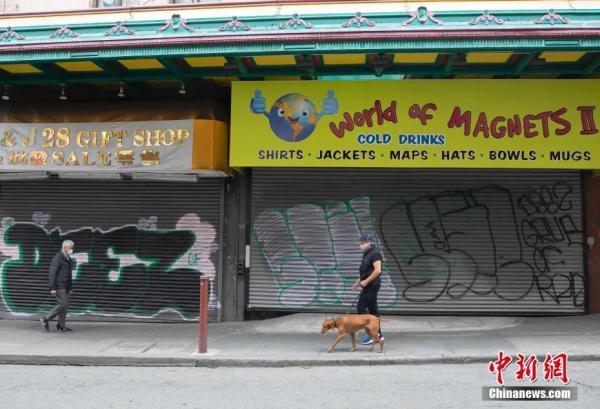 Editor's note: It's the end of another year.

For many people, this year is an unforgettable year.

In 2020, the new crown pneumonia epidemic disrupted the normal life of everyone. Overseas Chinese and overseas Chinese have experienced too much in the process of fighting the epidemic together...

Difficulties in operating Chinese business fell into the "winter"

Since the outbreak of the new crown pneumonia epidemic, Chinese restaurant operators and tourism operators have been greatly affected. Many restaurants have been forced to close down, and their business has fallen into a "winter" overnight.

Data map: On May 18, local time, the doors of shops selling tourist goods on the streets of Chinatown in San Francisco, USA were closed.

The epidemic has reduced international flights and reduced foreign tourists. Even the Tokyo Olympics had to be postponed.

A Chinese who is engaged in the tourism industry in Tokyo said that Japanese shop owners are unlikely to reduce rents, and larger shops may not be able to wait.

Yang Xinli is engaged in education and tourism in Singapore, and her company's business has been greatly affected. Previously, employees were working from home and could only do some preparatory work to prepare for the resumption of work after the epidemic.

Although there are fewer tourists, the rent and labor costs of the tourism industry have to be paid every month, and the capital chain will not be able to sustain it.

The cruel reality of no business is like a giant searchlight, ruthlessly "examining" the wallets of Chinese businessmen.

In fact, it's not just about traveling. In order to prevent the epidemic, even if you go out to eat, you have to think twice. This year is equally difficult for overseas Chinese catering companies.

Data map: On December 9, local time, New York, USA ushered in the first snowfall this winter, and the outdoor dining "bubble house" in Bryant Park was covered with snow.

Mr. Liu, the owner of Deep Well Roast Meat in Monterey Park, USA, admitted that he has been in the catering business for more than 4 years and this year is the most difficult.

In order to retain the guests, he extended the special offer time to the whole day. The soup and rice are free of money, and the delivery fee is fully reduced...All the fancy discount methods imaginable are used, and the customer rate is still much worse than before.

The owner of a Chinese restaurant in Paris, France said that when the closure was first released, it brought a round of catering consumption. However, as the weather gets colder and there is no heating for outdoor dining, the enjoyment of outdoor dining becomes torment. Even if the door is opened, there are not many customers.

Compared with the catering industry and the tourism industry, Chinese businessmen engaged in the trade industry have also suffered business this year.

Data map: A man in Sao Paulo, Brazil walks by in front of a store.

Due to the severe epidemic in Moscow before, the two major markets where Chinese businessmen gathered, Sadavo Market and Lyublino Market, closed early, and their revenues have shrunk significantly.

Malaysia is no exception. In the past March and April were the peak seasons for jackfruit demand, but this year due to the epidemic, workers were unable to work normally and sales channels were restricted. Many fruits were mature but could not be sold and had to be destroyed. Zhang Yihong, who runs the orchard, is heartbroken.

Data map: A shop painted with a dragon in the "Chinatown" of Buenos Aires, Argentina.

In the first few weeks of the outbreak in Argentina, 2,600 Chinese supermarkets were temporarily closed.

At the same time as the passenger flow is declining, the pressure of tax bills and rents still exists, and banks refuse to provide financial support. This makes many Chinese supermarket operators who are already struggling face the "worse worse" dilemma.

Some Chinese people were unfortunately fired because of the industry they worked in.

Mr. An, an "old driver" who has worked on a Japanese sightseeing bus for 6 years, is one of them. After suspension, he was still owed 600,000 yen in salary and travel expenses. I don't know when he will get it.

This phenomenon is not accidental. After the outbreak, the global economy has been affected. Practitioners in various industries related to travel, catering, commerce, etc. lost their jobs, and some overseas Chinese lost their jobs.

Ms. Sun, who has been working in Italy for more than ten years, said that she works with a family of four with her husband, son and daughter-in-law, and lives with one grandson.

In the past, the monthly income of the whole family would be more than 10,000 Euros, and life was still rich.

But now I can only rely on my laurels, and I don’t know how long it will last.

The epidemic has brought many inconveniences to everyone's lives. Mr. Wu's wife in Los Angeles, USA is a medical worker.

During the epidemic, Mrs. Wu struggled with the illness during the day, and at night, for the safety of her family, she had to stagger the time when she went home for dinner, and shared rooms with the children.

The inability of the family to get close to her caused her heart to suffer.

In extraordinary times, how children go to school once became a headache for Chinese parents.

Sending to school is afraid of being infected with the virus; remote learning at home, but it is difficult to achieve the desired learning effect, there is no good way to think about it.

Data map: On October 21, local time, in Naples, Italy, a teacher helped students with homework on the stone steps.

Previously, local schools were temporarily closed due to the new crown epidemic.

Chinese landlords also have a dilemma. They are faced with a dilemma: renting may not be rentable, and renting may be owed rent.

If you encounter "Laolai" tenants, it will be even more difficult to drive and defend your rights during the epidemic, and you will be unimaginable...

It is difficult to go to school and study abroad

As the epidemic continues to spread, the situation for Chinese students studying abroad is also quite difficult.

Students staying abroad have faced problems such as school closures, supermarket empties, and shortages of protective materials; students preparing to return to the country are faced with air ticket price increases, school interruptions, and the risk of infection during their journeys... Staying behind or returning home, every student Have to make a deliberate choice.

Cambridge campus under the epidemic.

The outbreak of the epidemic has disrupted many Chinese students' study abroad plans.

Due to various problems caused by the epidemic, Li Mingcong's study abroad trip will be delayed for one year.

He is not alone in choosing to delay studying abroad.

In Germany, visa procedures are cumbersome and time-consuming, and the review by the department responsible for studying abroad is slow.

It took Ayun and his classmates a few months to almost go through the entire process. After choosing to postpone, everything had to be repeated again, and the road to studying abroad was twists and turns.

Data map: On December 16, local time, in Berlin, Germany, the street near the iconic Brandenburg Gate was empty.

It is not easy for Chinese students who have already arrived in Japan. This year, some students plan to study in the local language school first, then take the exam for studying abroad and apply for university.

However, many Japanese schools have closed classes and exams for study abroad have been cancelled. Many Chinese students panicked instantly.

In addition to studies, the lives of international students are also greatly affected.

An international student studying at an Osaka Private University had been working-study before. Because of the outbreak, he had to stop working, not to mention the loss of income, and the opportunity to learn and practice Japanese.

The Russian epidemic has had a profound impact on the life of Chinese student Lin Lin. She admitted that she was under great psychological pressure and was particularly homesick, because she did not go home after the 2019 Spring Festival.

In addition, because I study abroad at my own expense, I usually do part-time jobs to reduce the burden of paying tuition at home. Now many places do not recruit part-time jobs, and economic pressure will follow.

Data map: Because the villages in remote areas of Siberia in Russia only have 2G signals, they cannot meet the demand for online lessons.

After dark, college student Alexei Dudoladov went online with a flashlight on a birch tree.

The study abroad journey of students who want to go abroad is quite ups and downs, and the road to study is still difficult.

2020 is too difficult for overseas Chinese!

But you are not alone, because the ancestral (home) country has never been absent.

Data map: On May 29th, the Ministry of Education launched online health consultation and diagnosis and treatment services for students studying in the United States.

In the current crisis, the overseas Chinese have not lost their confidence, let alone waited for death.

After experiencing the "cold winter", Chinese businessmen have experienced difficulties in their offline business progress. They have changed their minds to try to develop online businesses and get out of the stagnant predicament; overseas students overcome difficulties, suspend classes and continue to choose the path of studying abroad...

2020 is coming to an end. Although the epidemic is not over, we believe that the hardships and difficulties are temporary, and everything will be better in 2021.