A study shows how the conspiracy theory QAnon was able to spread worldwide this year thanks to Facebook, among other things. Particularly alarming: In the summer, more users shared conspiracy theories than posts from established media. 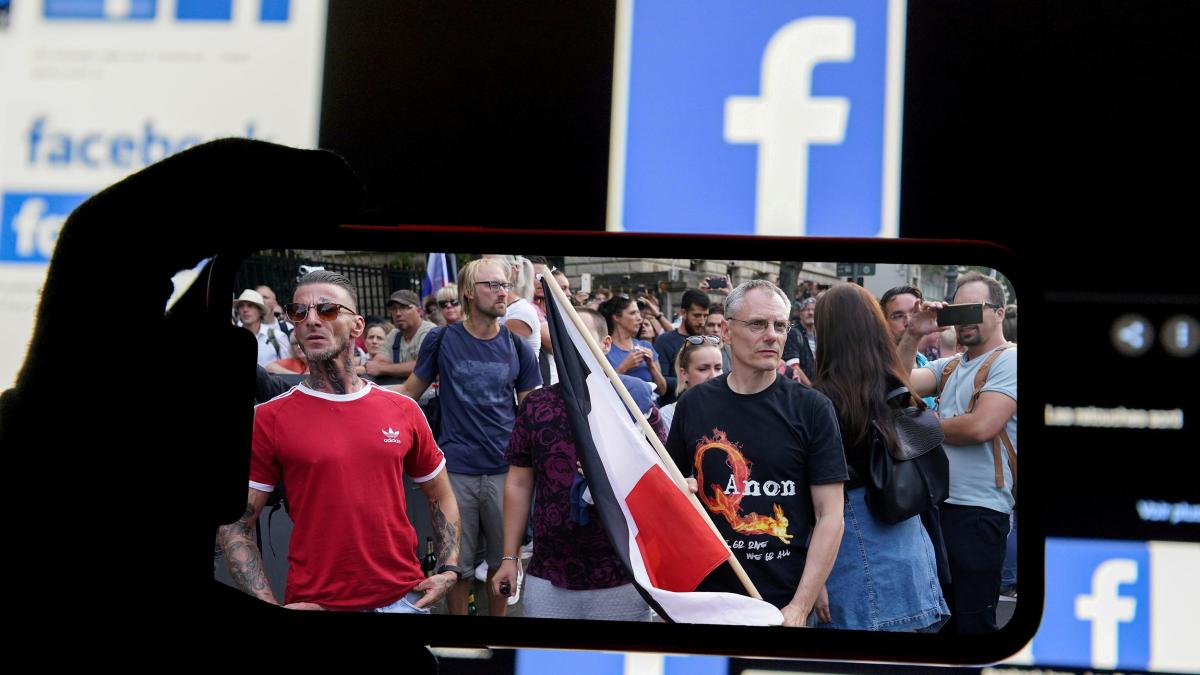 One conspiracy story in particular has been gaining popularity since the Corona crisis: the anti-Semitic conspiracy ideology QAnon, or “Q” for short, originating from the USA.

A still unknown person named “Q” has been posting his “QDrops” on so-called image boards since autumn 2017: allegedly explosive information, allegedly straight from the White House.

Supporters of "Q" believe that a "deep state" exists: a "deep", secret state within the state that intrigues against Donald Trump.

In their opinion, an elite of politicians, celebrities and Jewish entrepreneurs rule the world - and torture children in underground tunnels.

Such conspiracy theories are not a new phenomenon: there are always people who claim to have allegedly secret information.

But reaching millions of internet users has only been achieved up to now by “Q”.

By this year at the latest, the movement has also been perceptible in public spaces.

Their codes and logos can be seen especially at demonstrations by corona deniers, some of which are guided by prominent representatives and new right provocateurs.

Experts also attribute the fact that QAnon was able to spread more and more to the largest social network Facebook.

The US company began to delete pages and groups with QAnon references in October.

But this happened too hesitantly after three years.

Because profiles of private individuals have long been established that continue to exist and continue to bluntly spread fake news to this day.

This is the conclusion of a joint study by the British Institute for Strategic Dialogue (ISD) and the US news start-up NewsGuard.

For their analysis “The Boom Before the Ban: QAnon and Facebook”, the researchers evaluated 200,000 posts on the platform.

Three of the ten most active QAnon communities were therefore German-speaking Facebook groups.

The study confirms that the access to QAnon content on the platform has skyrocketed since the outbreak of the corona pandemic, more precisely: since April this year.

While there were still an average of 992 posts with QAnon-related references that month, in August there were almost twice as many posts, namely 1772.

And these were actively shared.

It is in the nature of things that Qanon followers move around a lot on the internet: “Do your own research” is one of the mantras of “Q”.

And its supposed prophecies are mostly quite incomprehensible.

Deciphering them generates data and draws users further into the narrative of the great world conspiracy.

What these types of stories always have in common is that a small group is secretly agitating against humanity.

This offers simple explanations in an increasingly complex world, especially in times of a pandemic: good versus evil, poor versus rich, Trump versus Biden.

According to the researchers, the false claim that former US President Barack Obama was spying on his successor with the help of senior government officials was widespread.

Fake news about the corona pandemic was also frequently accessed.

Content shared by "Q" followers does not necessarily differ from the content of those Trump supporters who are generally not considered followers of QAnon.

Trump himself does not seem to have anything against this type of admiration.

When he first commented on the movement in August when asked by a reporter at the White House - he didn't know much about it, "except that I heard that you like me very much, which I appreciate," the Q “Community as an opportunity to circulate even more eager QAnon content.

Particularly alarming: Between June and September, more social media users interacted with QAnon content than with contributions from established media such as the news pages of the “Wall Street Journal” or the British “Guardian”.

Facebook's algorithm itself contributes to false or radical narratives spreading so rapidly.

The company had already found out in 2016 that “64 percent of all accessions into extremist groups” could be traced back to its own recommendation tools.

It is no longer so important how long users linger in front of the posts, but whether they interact with them.

Because whoever interacts, i.e. shares, comments or licks, generates data and thus reveals something about his preferences.

And these in turn are relevant for the network's advertising customers.