Suspend the investigation into the Beirut port explosion for 10 days

Fadi Sawan, the judicial investigator in the Beirut Port explosion case, suspended the investigations for 10 days after two former ministers submitted a memorandum requesting that the case be transferred to another judge, according to a judicial source reported by Agence France-Presse. Caretaker, Hassan D. 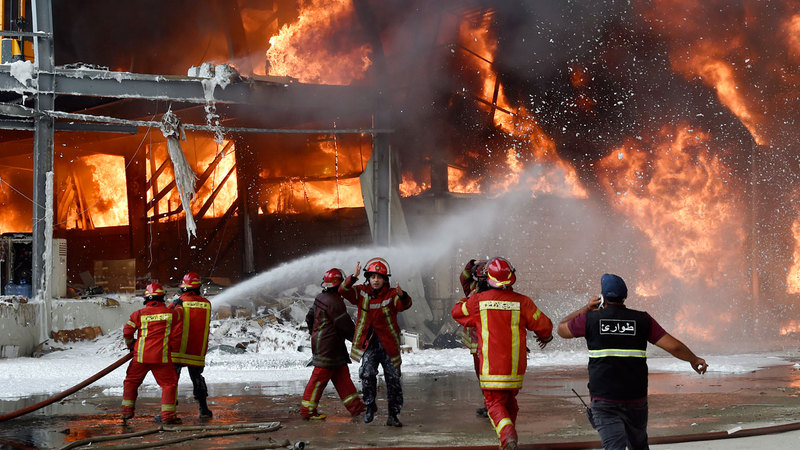 After a request to change the criminal investigator

Suspend the investigation into the Beirut port explosion for 10 days

The Beirut port blast killed 200 people and injured 6,500 others.

Fadi Sawan, the judicial investigator in the Beirut Port explosion case, suspended the investigations for 10 days after two former ministers submitted a memorandum requesting that the case be transferred to another judge, according to a judicial source reported by Agence France-Presse.

On December 10, Sawan had charged against the caretaker prime minister, Hassan Diab, and three former ministers, namely: the former Finance Minister Ali Hassan Khalil, and the former Minister of Public Works Ghazi Zaiter and Youssef Fenianos, but none of them appeared before him in the sessions he specified for questioning as « Defendants ».

The Lebanese authorities are investigating the explosion, which occurred on the fourth of August, and attributed it to storing huge quantities of ammonium nitrate for years in one of the port's wards without preventive measures.

It turns out that officials at several levels were aware of the dangers of storing them without taking a finger.

Zuaiter and Khalil, who are close to the Speaker of Parliament, Nabih Berri, submitted a memorandum to the Public Prosecution Office, requesting that the case be transferred to another judge, after they accused Sawan of violating the constitution by claiming against two former ministers and two deputies in Parliament.

The judicial source clarified that “the request was referred to the Criminal Court of Cassation,” indicating that “all parties to the case, starting from the Public Prosecution Office of Cassation to the judicial investigator and the Bar Association with its agency for the plaintiffs affected by the explosion, have a period of 10 days to respond to this memorandum.”

As a result, the source stated that Sawan "has suspended all investigation procedures until the Court of Cassation decides on the request to transfer the case."

Accordingly, a session that he had scheduled, today, to interrogate Diab, who did not appear in a first session, was canceled last Monday.

There is a divergence of views currently in Lebanon regarding the authority of the authorized party to prosecute the prime minister, ministers and deputies in the port case.

The prosecution raised against the four officials the objection of several political parties, including Prime Minister-designate Saad Hariri and Hezbollah.

The opponents of Sawan’s decision consider that his claim constitutes a breach of the constitution, especially in terms of constitutional immunity, since ministers are being prosecuted through the House of Representatives.

Last month, Sawan asked Parliament to investigate current and former ministers on suspicion of their shortcomings in dealing with the presence of ammonium nitrate in the port.

However, Parliament rejected his request, so he initiated the prosecution of the four officials on charges of "negligence, negligence, and causing the death" and wounding hundreds of people.

According to the Legal Notary, which is a non-governmental organization specialized in legal affairs and concerned with explaining and interpreting laws, “Constitutional immunity includes breaching the ministerial position, and does not include the exploitation of this position, and therefore neither murder nor corruption.”

The legal advisor warned that "all this remains an attempt to calm public opinion unless it is accompanied by serious investigations about the responsibility of these and other ministers who have not been summoned yet."

More than a month ago, the Beirut Bar Association filed hundreds of criminal complaints with the General Prosecution of the discrimination in the name of those affected.

And it fueled the anger of the street, indignant against the entire political class, accusing it of corruption and negligence, and now holding it responsible for the disaster.

Disagreement over the authority of the party authorized to prosecute the prime minister and the ministers.