The match was decided by a penalty from Berardi in the 8th minute but an absolutely undeserved defeat for the Samnites: Advice for everything, Falque hits the crossbar. The neroverdi of De Zerbi are hooking second place in the standings for now&nbsp;&nbsp; 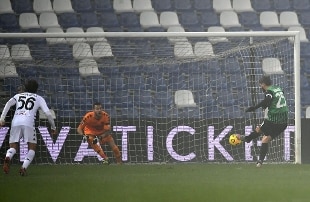 11 December 2020In the first advance of the eleventh day, Sassuolo (1 point in the last two games) catches up for now the second place in the standings by beating 1-0 to the 'Mapei' an excellent and unlucky Benevento.

Minute of silence to remember Paolo Rossi, then off to the dispute.

Lapadula immediately dangerous with his head (ball slightly high), but on 8 'the neroverdi pass with the penalty of Berardi, granted for a touch of the hand by Tuia on a cross by Maxime Lopez.

However, the Samnites did well, very dynamic in the field (very active Caprari) and often threatening in the restarts.

Resounding chance of a draw in the 36th minute: Lapadula's tap-in sill on the corner corrected by Improta was out of a breath.

Sassuolo in ten in the 48th minute: Haraslin's fallaccio on Letizia, the referee Sozza is recalled by the Var and transforms the yellow card into direct red.

Benevento, in numerical superiority, increases the pressure: Councils saves the newly entered Roberto Insigne (62 ') and a few seconds later (63') takes off on the conclusion of Caprari's lap.

The neroverdi are no longer able to climb, they grit their teeth and in the 92nd minute they still have to say thanks to Consiglio, who performs another miracle on Lapadula's header.