Sharjah Police Operations: The “People of Determination” platform works around the clock to answer their inquiries

The Director of Sharjah Police Operations Department, Colonel Jassim Muhammad bin Hada Al-Suwaidi, revealed that the operations room had received 838 thousand and 213 calls and reports from the public, since the beginning of this year, including emergency and non-emergency communications, all of which were dealt with by the management teams with high efficiency and professionalism. 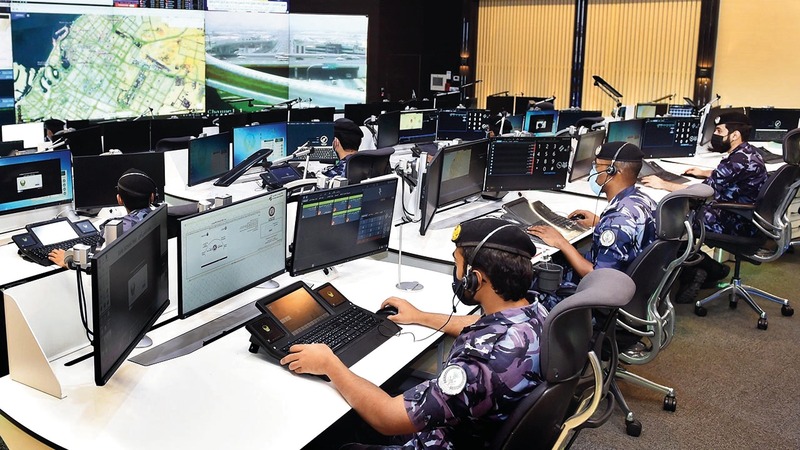 Sharjah Police Operations: The “People of Determination” platform works around the clock to answer their inquiries

The Director of Sharjah Police Operations Department, Colonel Jassim Muhammad bin Hada Al-Suwaidi, revealed that the operation room had received 838 thousand and 213 calls and reports from the public, since the beginning of this year, including emergency and non-emergency communications, all of which were dealt with by the management teams with high efficiency and professionalism. That the police personnel working in the operating rooms recorded humanitarian situations in saving the lives of individuals, listening to their reports and responding to them.

He said that the service platform for people of determination and hearing impairment in the central operating room, which was launched last year, works 24 hours to answer their inquiries.

In detail, Al-Suwaidi confirmed to “Emirates Today” that “the operation room has achieved positive rates of response speed by classifying accidents and reports, and evaluating them from the first respondent, to ensure the speed of moving to the report’s site, in order to enhance security and safety in the emirate,” pointing out that a number of these reports were not Important, as all reports were dealt with openly, answered, and the authors were listened to.

He stressed that last year the police launched a special platform to serve people of determination and hearing impairment in the central operations room by assigning a special number to them. During the current year, the data of the associates of Sharjah City for Humanitarian Services and the Al-Thiqa Club for the Disabled were collected and added to the platform, indicating that this platform works around the clock. By responding to all inquiries and programs related to public services for the criminal and traffic police, providing all information and services in addition to receiving notes and non-emergency reports by this group, and sending awareness messages to them according to their disability, to understand and know them, and to avoid them being victims of theft, traffic accidents or anything It harms them, as it is constantly being developed to serve them.

He pointed out that the leadership continues to develop its services according to the best standards of excellence that satisfy the aspirations of the public, meet the needs of customers in terms of services and information, and enable them to complete their transactions through smart means, in addition to ensuring the efficiency of the service and providing it with maximum speed, indicating that 901 is currently being developed by opening a center A relative of him, as he explained that the female component is the one who handles, manages and responds to non-emergency reports during the morning shift.

He added that Sharjah Police conducts surveys and takes the opinions of the public constantly, to improve the level of services and measure the percentage of general satisfaction, as the operating room evaluated some random reports and measured the speed of response in them, and it was found that the average response time increased to seven minutes, by publishing patrols and distributing them to hot areas. In various regions of the emirate around the clock.

The Director of Operations Department at Sharjah Police confirmed that the Operations Department has many specializations, including mobile operations centers that perform police services to the public in residential areas, according to the latest technological systems and technologies, to achieve the strategic police vision for 2021, to be the fastest in response speed in the world.

He pointed out that the Speed ​​of Response Time Index, which Sharjah Police is working to develop, is in the public interest by raising the feeling of safety in the emirate, reducing the percentage of troubling crimes, increasing dependence on services, and reducing serious accidents and deaths.

He explained that the mobile operating rooms are activated according to the type of event or event, in that the fire that broke out in one of the towers in Al Nahda area, a joint operations room was established between Sharjah Police and Civil Defense, and thanks to the efforts of the police operations room employees, record numbers were achieved in this incident in operational matters. Despite the challenges and difficulties faced by the teams in the process of extinguishing the tower in terms of evacuation, response, security cordon, sheltering families, logistical support, transferring them to their new residence and guarding the tower, as all of this was within six hours, and in the month of Ramadan and in light of the Corona pandemic.

Al-Suwaidi stated that artificial intelligence, innovative features and activation of the location system contribute to assisting police and patrol personnel to reach the site of the accident or incident as soon as possible, as modern and advanced systems can locate the caller and extract his complete data, see the nearest periodical to the location from which the report came from, and send the coordinates Electronically.

He pointed out that the rate of police response to the public has achieved a very high level of satisfaction during the current year, indicating that the operating room has traffic and criminal support systems for it to help people and reach them, citing an example of a sick person contacting and disconnecting from him before knowing his location, as this report is dealt with However, it is urgent by determining its location and accessing its data within a few minutes, and sending him a periodical as soon as possible.

He indicated that individuals stranded in the desert and others who were disconnected from them were rescued by determining their coordinates through modern systems.

He pointed to the visual warning that had been developed, linking all banks, exchange shops and the gold market with the police operations room in the emirate, indicating that the Sharjah Police had succeeded in harnessing modern digital technology in monitoring, reducing theft and looting crimes, and seizing gangs specialized in stealing bank clients from During this system.

He explained that members of the police follow the cameras and work to receive reports from the public in the operating room, including 10% of the female component around the clock in all languages, stressing that the Sharjah Police Operations Room follows all the warnings that you suspect by monitoring the cameras and re-seeing them.

Al-Suwaidi explained that the surveillance cameras revealed many issues, including the issue of the escape of a driver after he ran over an individual, and all the cameras were tracked and monitored and coordinates were made to search and narrow the search channels and filter them until the car and its owner were identified, but the surprise was the presence of a person who violated traffic laws and committed a major violation While tracking this vehicle, the Traffic Department was informed of its data and seized.

He pointed out that the personnel working in the operating room undergo several practical and theoretical courses, and tests to qualify them to respond to members of the public, and their patience and how they perform in responding to reports are tested under great pressure, and then they are trained on modern and advanced programs and technologies.

He explained the importance of community members realizing the size of the responsibility that falls on the call center employee in the operations room, and thus the need for cooperation to relieve them during emergency calls, give them greater opportunity to communicate with those concerned, and transfer reports to specialists.

The Director of Sharjah Police Operations Department, Colonel Jassim Muhammad bin Hada Al-Suwaidi, sent a message to community members about the need to contribute to enhancing security and the speed of response to emergency cases, by not calling 999 except in the case of urgent and necessary communications, and calling 901 To raise general inquiries and non-emergency reports, so that the line is not occupied and the delay in responding to the necessary reports in the Emirate.

A thousand calls have been received by the Sharjah Police Operations Room since the beginning of 2020.