The actor, known in particular for his interpretation in the Braquo series, was in the Thalys on August 21, 2015, when Ayoub El-Khazzani opened fire before being overpowered by militants. 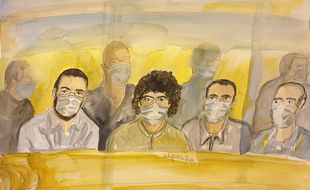 Ayoub El-Khazzani (left) is on trial alongside three other men -

“To imagine dying under the bullets of a Kalashnikov is quite unusual.

It is not death that we imagine.

I prefer to die on stage, personally.

»On August 21, 2015, Jean-Hugues Anglade returned from Amsterdam where he had spent four days with his two sons, then aged 13 and 14, and his ex-partner.

In the Thalys which brings them back to Paris, the actor is listening to music when, suddenly, he sees three members of the train crew running and locking themselves in a room.

"I thought it was totally inappropriate to play cat and mouse while on duty," he said on Monday at the bar of the special assize court which has been judging Ayoub El-Khazzani for six days.

But, very quickly, he understood that "something was happening".

The star of the series

now 65, hears a woman, arriving from the next car, shout in English: "He's shooting people!"

[He shoots people!] ”The passengers get up, rush to the back of car 11 and knock on the door of the room in which the train personnel are sealed.

“We knocked, explained that we were not terrorists,” continues Anglade, dressed all in black.

He would have liked "at least to put the children to safety."

“Shocked”, he does not hide his “dissatisfaction” with regard to this controller and the two hostesses who did not open the door.

He and the other passengers feel like they're trapped.

"We waited to be killed, because we heard: 'He shoots! He shoots!'

“, Explains at the bar the ex-companion of the actor, persuaded while his last hour had arrived.

"What do you want to do, once you get cornered in a mousetrap, to avoid someone who is going to kill you?"

The actor injures his finger by breaking a window to fire the alarm signal.

The noise was "very soft".

The train slows down.

Rather than wait "for the terrorist to shoot us", Anglade wonders if it is not possible to open the doors and jump on the tracks, "even if it is very dangerous".

But someone replies "that you can never completely stop a TGV on a high speed line".

He remembers his astonishment when he learned, some time later, "that people went down on the ballast" to escape the attack.

After a few minutes, Anthony Sadler, one of the three Americans who overpowered El-Khazzani in the car next door, comes running and asks them for "a survival blanket, first aid equipment".

"We told him to knock on the door of this van, but they do not want to open," resumes the one who won the César for best actor in a supporting role for

Anglade then “timidly stepped into the bay to see if there was a major, catastrophic crime scene”.

From a distance, he sees Spencer Stone trying to rescue Mark Moogalian, lying on the floor of car 12. The passengers next to him are silent and show "a very moving, overwhelming dignity," he emphasizes. he.

A photo with "Oliver Stone"

Slightly injured, Anglade was evacuated to Lille hospital for treatment.

There, he takes a photo with the one he twice mistakenly calls "Oliver Stone", as the director.

After the attack, the eldest of his children was “very distressed by what he went through,” says Jean-Hugues Anglade.

He was taken care of by a psychological unit set up when the Thalys arrived at Arras station.

The other wanted to accompany his father to the hospital, "a way of evacuating post-traumatic stress".

His ex-partner, she still has "a lot of trouble" to bring up the facts five years later.

Jean-Hugues Anglade expects this trial to show his sons "that justice is strong and that it is there to protect them".

Spencer Stone, hospitalized for malaise upon landing at Roissy on Wednesday in Paris, finally returned to the United States without being heard.

"He is not able to speak normally", indicates his lawyer, Me Thibault de Montbrial.

Assuring that he does not know what his client is suffering from, he explains that his client's state of health was "worrying for two days".

"We did not have any semblance of a medical certificate" justifying being deprived of an "essential" witness, indignant Ayoub El-Khazzani's lawyer, Me Sarah Mauger-Poliak.

The former US Air Force sergeant could testify by videoconference within ten days.

"It is important", underlines the president.

The verdict is expected on December 17.

Thalys attack: "We had changed wagons because there was no wifi," says one of the former American soldiers

Thalys attack: "I think he was there to kill everyone", testifies a survivor