"There is no threat to life": Russian soldier injured in a mine explosion in Karabakh

In Nagorno-Karabakh, a Russian officer was injured in a mine explosion. The Ministry of Defense said that the serviceman was taken to a hospital in Baku, there was no threat to his life. As a result of the incident, one Azerbaijani officer died, four more employees of the Ministry of Emergency Situations of Karabakh were injured of varying severity. A mine explosion occurred during the search for the bodies of those killed during the conflict in Karabakh - the Russian defense department noted that the joint groups created to carry out this task have been effectively operating in the region for more than a week. 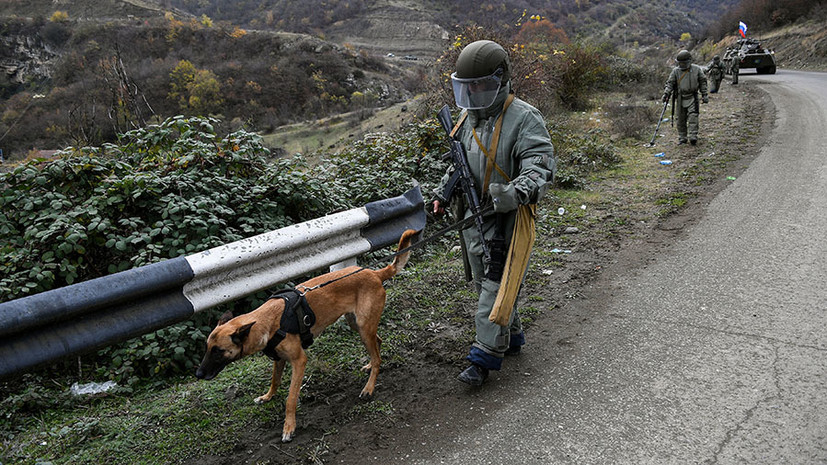 The Russian officer was wounded as a result of a mine explosion while searching for the dead in Nagorno-Karabakh, he was taken to a hospital in Baku, there is no threat to his life.

This is stated in the statement of the Russian Ministry of Defense.

On November 23, a joint group for the exchange of bodies of dead soldiers, consisting of Russian peacekeepers, representatives of the Armed Forces of Azerbaijan, the Ministry of Emergency Situations of Karabakh, as well as the International Committee of the Red Cross, searched for the bodies of those killed in the Terter region.

“In the area of ​​the settlement Madagiz during the work there was a mine explosion.

As a result of the explosion, an officer of the Russian contingent of the peacekeeping forces was wounded, ”the message says.

As a result of the incident, one Azerbaijani officer died, four more employees of the Ministry of Emergency Situations of Karabakh were injured of varying severity.

The Russian soldier was taken to a hospital in Baku, where he is being treated.

The lives of four Karabakh rescuers are also not in danger, the State Emergency Service of the unrecognized Nagorno-Karabakh Republic reported.

The Ministry of Defense of the Russian Federation explained that the joint groups created at the initiative of the command of the Russian peacekeeping forces to search for and transfer the bodies of those killed during the conflict have been working smoothly and efficiently for more than a week.

“All the bodies of the dead found as a result of the work of joint groups are handed over to the parties for burial,” the department said.

Earlier, on November 23, it became known that the sappers of the Armed Forces of Russia began humanitarian demining of the area in Nagorno-Karabakh.

The detachments of the International Mine Action Center of the Ministry of Defense of Russia arrived in Yerevan by aircraft of the Russian military transport aviation, from where they went to the NKR to clear the terrain, roads and other objects.

It is noted that humanitarian demining is carried out at the request of the administration of the unrecognized Nagorno-Karabakh Republic.

It should be reminded that on November 10, the agreement of Armenian Prime Minister Nikol Pashinyan, Azerbaijani President Ilham Aliyev and Russian President Vladimir Putin on a ceasefire in the conflict zone in Karabakh began to operate.

According to the document, the sides cease hostilities, stop at occupied positions and exchange prisoners.

The agreement also provides for the dispatch of Russian peacekeepers to the line of contact.

The rotation of Russian peacekeepers in Nagorno-Karabakh should be carried out at least twice a year.

In addition, specialists from the Russian Emergencies Ministry were sent to the region.

According to the latest data, over the past day, over 2.3 thousand refugees returned from Armenia to Nagorno-Karabakh.

This was announced by the official representative of the Russian Ministry of Defense, Major General Igor Konashenkov.

"During the day, 2,334 refugees who had previously left their homes in Nagorno-Karabakh because of the hostilities returned to Nagorno-Karabakh from the territory of Armenia," TASS quoted him as saying.

Konashenkov also said that since November 14, more than 11 thousand residents of Nagorno-Karabakh have returned to their former residences with the assistance of Russian peacekeepers.

President of the unrecognized Nagorno-Karabakh Republic Arayik Harutyunyan praised Russia's contribution to restoring peace in the region and its efforts to reach an agreement on a ceasefire.

He also expressed gratitude to Russian leader Vladimir Putin for mediating in stabilizing the situation.

“We express our gratitude to Russia and special gratitude to Russian President Vladimir Vladimirovich Putin for mediating efforts to stabilize the situation and assistance in ceasefire and end of the war, restoration of peace and stability in our region,” Harutyunyan wrote on Facebook.

He noted that the Russian peacekeepers who arrived in the region are helping to stabilize the situation in Karabakh and ensuring the safety of returning refugees.

"By order of the Minister of Defense of Russia (Sergei Shoigu. -

He also thanked Putin for his efforts to protect monuments of historical and cultural heritage and religious sites on the territory of Karabakh.