The current President of Moldova Igor Dodon called the words of the elected head of the country Maya Sandu about the withdrawal of Russian peacekeepers from Transnistria a serious mistake. He called on his colleague “not to make harsh statements against Russia” and recalled that the Transnistrian conflict has not been resolved, and up to 40% of the Russian-speaking population live in the country. Earlier, Sandu expressed hope for the reunification of Pridnestrovie with Moldova and the resolution of the conflict with the condition of the withdrawal of the Russian contingent. 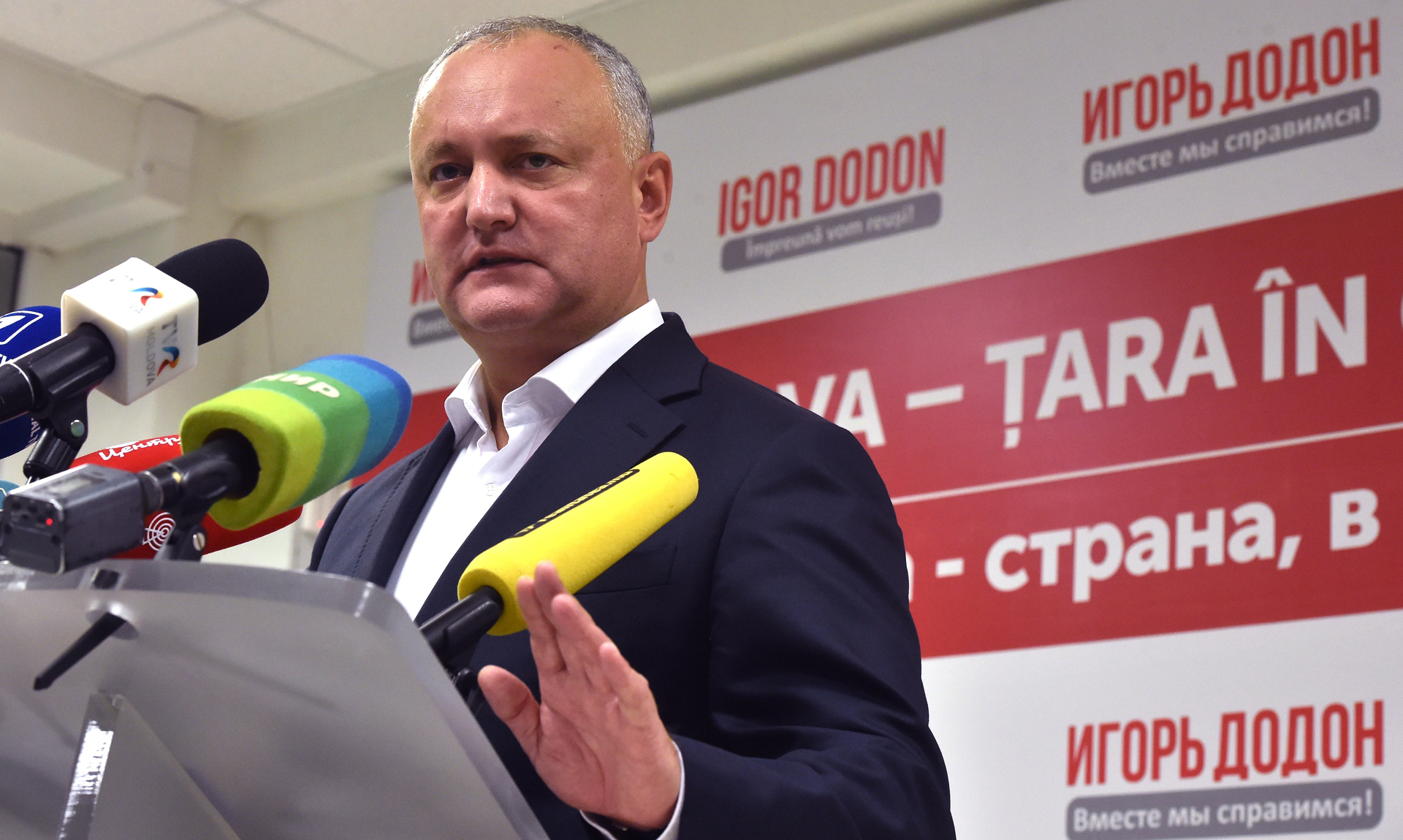 The current President of Moldova, Igor Dodon, called the statements of the elected head of the country Maia Sandu on the withdrawal of Russian peacekeepers from Transnistria and her call to Kiev to tighten policy towards this region as a serious mistake.

“She already says that the peacekeepers need to be urgently removed from the Dniester.

And that the Ukrainians need to press harder on Transnistria, Donbass and so on.

What is this appeal of the President-elect?

I think this is a serious mistake, ”Dodon said on the air of the NTV Moldova TV channel.

According to him, “a very difficult situation” has developed for Sandu.

“To pursue a balanced foreign policy, which I have been pursuing for four years, that is, not to make harsh statements against Russia, against peacekeepers, etc. and risk losing part of my electorate.

Because part of her electorate wants something else.

Or to remain the politician who for the last four years has shouted at Russians and has banned Russian in schools.

We remember all this, ”he said.

According to Dodon, Sandu's election promises and attempts to "speak Russian, make newspapers in Russian" were "just a mask."

The current leader of Moldova also stressed that if the president-elect "starts to pursue an anti-Russian policy," "nothing good will happen" either for the country or for it.

“Now the majority of citizens want this balanced foreign policy.

They want to be friends with both Europe and Russia.

All polls show this, ”says Dodon.

Let us remind you that the Central Election Commission of Moldova recognized Maya Sanda as the winner of the presidential elections.

The position of the president-elect

After Sandu won the victory, she gave an interview to the Ukrainian newspaper "European Truth", in which she outlined her views on a number of important issues for Chisinau, in particular those related to the Transnistrian conflict and relations with Moscow.

According to Sandu, she has a "rich agenda with Russia."

“Many Moldovans work in Russia, and we must provide them with decent working conditions and social protection until acceptable economic conditions are created at home, in Moldova.

I want to unblock exports to Russia, which have been closed for a number of items after Moldova signed the Association and Free Trade Agreement with the EU.

There are companies for which the Russian market is important, and I will work to ensure the possibility of export to both the EU and the Russian Federation, ”she said.

Sandu also spoke about the situation around Transnistria.

“Of course, there is something that we must do ourselves to resolve the conflict - this is the fight against corruption and smuggling.

After all, as long as politicians in Chisinau and Tiraspol are interested in making money from the conflict, they will resist its political solution.

But we will not be able to come to a final political solution to the conflict on our own.

Russia is part of the negotiation format, ”she said.

In addition, the president-elect claims that Moldova "took a soft approach" towards Transnistria.

“We recognized that Transnistria is part of the negotiation format, we gave the local business the same trade regime as our producers, in particular the right to free export to the EU under the Association Agreement.

We have signed over 300 documents on resolving the conflict, and so on.

But in spite of all these steps, they have not come to anything yet, ”she said.

In addition, Sandu expressed her hope that "one day there will be a geopolitical opportunity for the reunification of Moldova."

“And we must be ready for this.

But in any case, it should be a peaceful solution, ”the politician said, adding that it should be suitable for“ all of Moldova ”.

The President-elect added that Chisinau will find "a format for resolving the conflict."

“And it should include the complete withdrawal of Russian troops from the territory of Moldova.

We have always talked about this, and we will talk about it in the future, ”she said.

Moscow responded to this statement by Maia Sandu.

“It is their presence that has been serving as a guarantee of peace in the region and the protection of people living there for almost 30 years.

220 thousand of them are our citizens.

Their interests, their security are more important than the loud statements of the new president of Moldova, ”Alexei Pushkov, chairman of the Federation Council commission on information policy, wrote on Twitter.

Sandu calls for the withdrawal of Russian peacekeepers from Transnistria.

But it is their presence that has served as a guarantee of peace in the region and the protection of the people living there for almost 30 years.

220 thousand of them are our citizens.

Their interests, their security are more important than the loud statements of the new President of Moldova.

Recall that Transnistria, more than half of the population of which are Russians and Ukrainians, sought secession from Moldova before the collapse of the USSR, fearing the annexation of the Moldavian Republic to Romania.

In 1992, Chisinau unsuccessfully tried to resolve the conflict by force, after which Pridnestrovie became virtually outside the control of the Moldovan authorities.

The negotiations on the Transnistrian settlement are being conducted in the "5 + 2" format: Chisinau and Tiraspol participate in them as parties to the conflict, Russia, Ukraine and the OSCE act as mediators, and the EU and the US act as observers.

"There is no plan"

According to the director of the Institute for Effective Politics of Moldova Vitaly Andrievsky, the team of Maia Sandu sees as their first task in the Transnistrian direction "the issue of the need to suppress all smuggling from Transnistria to various regions through the territory of Moldova and Ukraine."

And only after all this it will be possible to raise the question of the status of Transnistria as part of Moldova, ”the expert said in a conversation with RT.

In turn, Vladimir Olenchenko, senior researcher at the Center for European Studies, IMEMO RAN, believes that "there is little specificity in Sandu's words," and the alleged withdrawal of Russian peacekeepers from the conflict zone "will only exacerbate the situation."

The fact is that so far the conditions for the reunification of Transnistria and Moldova are not really visible.

In order for this to happen, as the newly elected president says, you first need to determine the status of Transnistria, ”the analyst said in an interview with RT.

He also recalled that Dodon proposed adopting a law on the federalization of Moldova.

“In this case, Transnistria would receive a special status.

But Sandu has already stated that she does not support the idea.

And instead of clearly defining a position on status, she vaguely suggests simply reunification.

But given that she does not essentially say what kind of "format for resolving the conflict" we are talking about, we understand that she has no, even an approximate plan.

And this means that a return to 1992, when serious contradictions and clashes began in the region, is not ruled out, ”the expert says.

According to Olenchenko, so far the impression is that Sandu "only wants to appear as a decisive politician."

“It should also not be overlooked that it probably does not come from the interests of Moldova.

Because if we take into account the state interests and the national interests of the Moldovan people, then all the issues would have to be carefully worked out, and we are not seeing this now.

The latest statements by Sandu only push to aggravate relations between Transnistria and Moldova, ”the analyst said.

Speaking about the prospects for relations between Moscow and Chisinau, Vitaly Andrievsky suggested that "the elected president will put the development of trade and economic ties with the Russian Federation to the fore."

“In addition, it is important for Maia Sandu to resolve the issue of migrants.

The new government will seek to ensure that Moldovan workers on the territory of Russia have a certain status, can receive pensions if they constantly live and work here.

There is no problem in maintaining partnership relations between Moldova and Russia, ”the expert believes.

At the same time, Vladimir Olenchenko draws attention to the fact that "the contradictory statements by Sandu related to Russia may become an obstacle on the path of building up mutually beneficial partnership between Chisinau and Moscow."

“The newly elected president, on the one hand, makes claims against Russia, and on the other, wants to develop the export of Moldovan goods to the Russian Federation.

But the new leader's anti-Russian rhetoric is unlikely to strengthen ties between states.

And in the end this will have a negative impact not only on relations with Moscow, but also on the living standards of Moldovan citizens, ”the analyst predicted.