At the bar, psychiatrists and psychologists tried to expose the tortured personality of the accused to the court 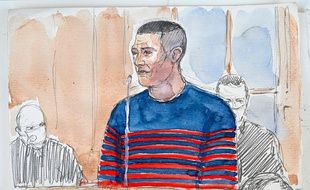 Jonathann Daval appears for the fourth day before the Assize Court of Haute-Saône for the murder of his wife.

Jonathann Daval, who admitted having violently hit and strangled his wife Alexia, is capable of having "impulsive and uncontrolled reactions", according to an expert heard Thursday on the fourth day of the trial before the Haute-Saône Assize Court.

"Jonathann Daval does not exist, he only exists according to the gaze of others," noted psychologist Tony Arpin.

He has a "chameleon personality", "a bad image of himself" and "gives what you want him to appear", continued the expert who had met him three months after his arrest for the murder of his wife Alexia in October 2017.

A "child" who "cannot take responsibility"

The accused has long been in "denial" of his crime, it is a "defense mechanism": "for three months he convinced himself that it was not him" so much "he cannot stand that his image is tarnished, ”said the psychologist.

Then when the facts are there, he fled them by accusing another, his brother-in-law.

For the expert, “his body has spoken”.

He couldn't escape what he did.

"He cannot take responsibilities", which his wife accuses him of, "so he runs away".

"A word, a word" could have triggered his "fury"

And "with his wife, he faces the impossibility of becoming a man by becoming a father himself", because of his erection problems which persist despite strong drug treatment, notes for his part the expert psychiatrist Joffrey Carpentier.

The latter does not find any psychiatric pathology in the accused who nevertheless remains "criminologically dangerous", according to him.

On the night of the murder, Jonathann Daval explained that he had an argument with Alexia over her behavior.

He admitted to having violently hit and strangled her.

"He was ready to put up with a lot of things, but one word, one word surely sparked all the fury he had in him for a long time," said Tony Arpin.

If he feels that a situation will "escape him, he can have quite impulsive and uncontrolled reactions, it is the narcissistic flaw", he adds.

His lawyer, Me Randall Schwerdorffer, evokes a possible "pressure cooker effect" that the expert considers "quite possible".

The attorney general, Emmanuel Dupic, like the civil parties, hypothesized that Alexia wanted to leave Jonathann.

"Mr. Daval can not imagine that the loved object leaves him", abounds the psychologist.

A puny and fragile child, affected by significant deafness problems and a speech delay until the age of 5, Jonathann will be a fragile adolescent, bullied by his comrades when he will have to wear a corset for two years due to 'scoliosis.

He suffered the death of his father, whom he did not live with, at the age of 12.

At this time, Jonathann Daval develops obsessive-compulsive disorder which could be linked, according to Tony Arpin, to a sexual trauma suffered in his early childhood, which he no longer remembers.

Murder of Alexia Daval: The attitude of the grieving widower is "a mechanism of judicial and psychological defense"