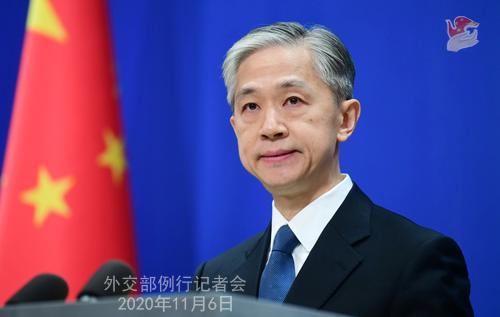 CCTV reporter: According to reports, the Chinese government has donated medical supplies to women, children and adolescents in 53 African countries through the African First Lady Development Association to fight new coronary pneumonia.

Can you introduce the relevant situation further?

Wang Wenbin: A few days ago, the Chinese government, through the African First Lady Development Association, has successfully donated medical supplies to women, children and adolescents in 53 African countries to fight the new crown pneumonia epidemic.

China has overcome difficulties such as the obstruction of international transportation under the epidemic situation and shipped all supplies to African countries within four months.

With the great attention of governments and the support of the Federation, materials are distributed and used in various countries.

African governments and people from all walks of life have positively commented on this, saying that aid materials will help strengthen the ability of African women, children and adolescents to fight the epidemic. It is vital for countries to help each other and unite and cooperate to overcome the epidemic.

Since the outbreak of the epidemic, China and Africa have always supported each other and overcome the difficulties together.

Faced with the pressure of fighting the epidemic, China provided a large amount of urgently needed anti-epidemic materials to the African Union and African countries through various channels in a timely manner; 6 anti-epidemic expert video conferences were held with Africa to share anti-epidemic experience; 15 countries in Africa Dispatch of anti-epidemic medical experts, 46 Chinese aided medical teams to Africa actively participate in the local anti-epidemic.

China also promised that the new crown vaccine will be the first to benefit developing countries such as Africa after it is completed and put into use.

Regardless of the risks and challenges we face, we will work with our African brothers in the same boat and forge ahead to promote the building of a China-Africa community with a shared future, so that the banner of China-Africa friendship will always fly high.

"Beijing Daily" reporter: I have three issues related to epidemic prevention and control.

First, the Chinese embassies and consulates abroad have recently issued a notice, imposing stricter requirements for the prevention and control of the epidemic on passengers coming to China. What are your considerations?

Second, among the various foreign import prevention measures recently released, the one with the most attention should be the "double negative" certification. What are the specific considerations in this regard?

Thirdly, in addition to the "double negative" certificate, there is also a requirement that transit passengers arriving in China have to undergo nucleic acid and antibody testing again at the transit point. What are the main considerations in this regard?

Wang Wenbin: Regarding your first question, the situation of overseas epidemics has deteriorated further recently, and the risk of imported epidemics facing China has continued to increase.

The number of imported cases abroad in October increased by about 45% compared with September, reaching 515.

At the same time, local epidemics have also occurred in individual places in China.

Regarding your second question, since the implementation of pre-boarding nucleic acid testing measures for passengers in China, they have played an important role in preventing the importation of overseas epidemics.

However, there is no detection method that can achieve 100% accuracy.

According to the opinions of relevant professional departments, the results of serum-specific IgM antibody testing are stable, and nucleic acid testing can greatly improve the accuracy of screening for new coronavirus infections. Therefore, we have increased the requirements for serum antibody testing.

Judging from the previous trials in some countries, the effect is good.

It is understood that countries have already adopted similar measures.

Regarding your third question, as I mentioned earlier, the current overseas epidemic situation is very severe. Every time passengers who come to China stay in one place, the risk of infection is increased by one point.

Judging from the current situation of imported cases, many people have undergone nucleic acid testing before traveling and then contracted the virus again. Such cases account for nearly half of imported cases.

Therefore, an additional test at the transit point is necessary for epidemic prevention and control.

At the same time, we also suggest that if you really need to travel across the country, you should plan your route reasonably and choose direct flights as much as possible to avoid transits on the way.

Agence France-Presse: In response to reports that China has imposed restrictions on Australian products exported to China, can you confirm or provide some details?

Wang Wenbin: I have answered relevant questions many times in the past two days.

What I want to emphasize is that the relevant measures taken by the Chinese competent authorities on foreign products exported to China in accordance with laws and regulations are in compliance with Chinese laws and regulations and international practices. They are also responsible for China’s domestic industries and consumers. They are completely reasonable, legal and beyond reproach. .

At the same time, I also want to tell you that opening up is China's basic national policy.

China will continue to uphold the beliefs of openness, cooperation, unity, and win-win results, and will unswervingly expand opening up in an all-round way.

This is what China said, and it did so.

The series of measures to expand opening up announced by China at the second China International Import Expo have been fully implemented. The growth rate of China's imports of goods and services over the past year has been significantly higher than the global average.

The third CIIE was held as scheduled under the special background of the new crown pneumonia epidemic, and companies from all over the world participated actively.

According to the "Global Business Environment Report 2020" released by the World Bank, China's global business environment ranking has jumped to 31st.

All this shows that China has achieved tangible results in expanding opening up and promoting mutual benefit and win-win results, which is beyond doubt.

I have also noticed that some people in Australia have recently raised some doubts about China’s relevant measures, and some have also accused China of violations of international trade rules.

What I want to tell you is that since 2018, more than a dozen Chinese investment projects in Australia have been rejected by the Australian side on the grounds of ambiguous and unfounded “national security”, including prohibiting Chinese companies from participating in the construction of Australia’s 5G network, and even Including infrastructure, agriculture and animal husbandry.

Who is going against the principles of market economy and the spirit of the China-Australia Free Trade Agreement?

Who is inconsistent with words and deeds, undermines cooperation, and takes discriminatory measures?

I think the relevant facts are very clear.

We have repeatedly emphasized that mutual respect is the basis and prerequisite for pragmatic cooperation between countries.

We once again urge some people in Australia to self-examine and do more things that are conducive to mutual trust and cooperation between China and Australia, in line with the spirit of China-Australia comprehensive strategic partnership, and create good conditions and atmosphere for practical cooperation between the two countries in various fields.

Reuters reporter: An Australian court prosecuted a 65-year-old Chinese man under "anti-foreign interference legislation" for the first time on Thursday.

Does China know the situation of the case?

Wang Wenbin: I don't know the specific circumstances of the case.

As for Australia's so-called "anti-foreign interference legislation", my colleagues and I have stated our position many times.

"Global Times" reporter: On the 5th, the U.S. State Department website announced that U.S. Secretary of State Pompeo announced the withdrawal of the decision to characterize the East Turkistan Islamic Movement (ETIM) as a terrorist organization.

How does China respond to this?

As a co-sponsor of the "Eastern Iranian Movement" in the 1267 Committee of the United Nations Security Council, the United States has backtracked on the issue of the terrorist characterization of the "Eastern Iranian Movement", which once again exposed the "double standards" and anti-terrorism of the Washington authorities on the issue Organize the ugly face of "fitting for use, disagreement for discarding".