[Go Hyun-Jun's News] This is Ko’s news-justice time to pick and deliver the news of the topic. What's the first Monday first order today? &lt;Hyun-Joon Ko/Presentation Critic&gt; After today, the US presidential election begins. President Trump's wax doll was thrown into the trash, and various interpretations are being made. 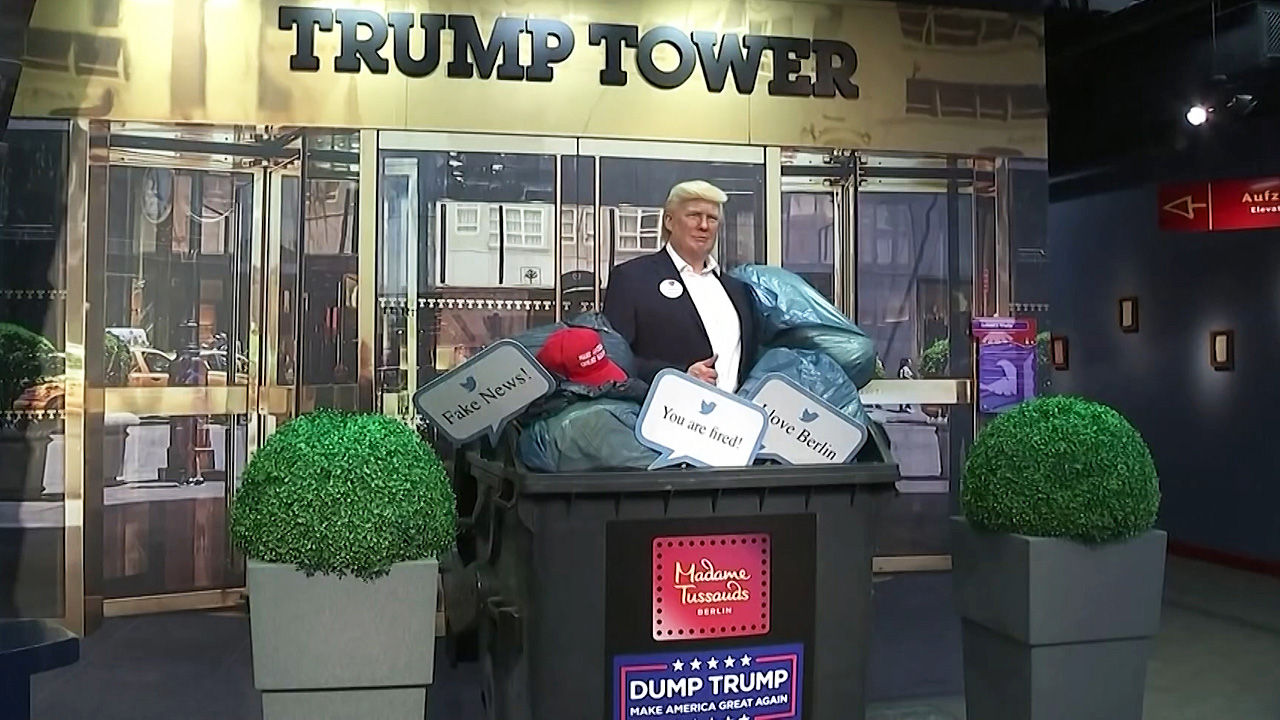 is the time for Hyun-Jun Go's news just to deliver the news of the topic.

Today (2nd) First Monday What is the first order?

today, the US presidential election begins. President Trump's wax doll was thrown into the trash, and various interpretations are being made.

US President Trump is carried in a large trash can, and there are also signs in the shape of a Twitter message window that read'fake news' and'you're fired' around you.

Of course not actually President Trump.

This is a wax doll modeled after President Trump.

The beeswax museum in Berlin, Madame Tussauds, put the wax dolls of President Trump in the trash on the 30th of last month local time.

The museum's marketer explained that it was a symbolic activity ahead of the U.S. presidential election and that it was abandoned as a preliminary measure, saying that President Trump expected the reelection to fail.

On the other hand, the dolls of President Trump's predecessor, former President Obama, are displayed as they are, but the fact that only President Trump is so neglected is not irrelevant to the coldness of relations between Germany and the United States over issues such as the North Atlantic Treaty Organization and NATO's defense share Analysis also comes out.

I think it's obvious that it's an unprecedented U.S. presidential character, whether re-election or not.

Last weekend, the front of a major department store was crowded with people even before the store opened, because of the news of a price increase for a luxury brand.

Yesterday, more than 50 people lined up in front of a department store in Myeong-dong, Seoul, from 9:30 am, an hour before the store opened.

About 40 people also gathered in front of another department store in Myeong-dong at the same time.

It was because of the luxury brand, Chanel, and as rumors spread that Chanel would increase product prices sooner or later, mainly online, and people who wanted to buy it before the price rose.

However, it has not been officially confirmed whether the price has really risen, but the reason why people rush to the store despite unclear rumors is because there is a precedent for Chanel to increase its price once this year.

It's not the first time this looks like this.

In May, Chanel raised the prices of major products by about 20%, and rumors of the increase circulated in advance at the time, and even the so-called open run phenomenon, in which consumers rush to the store as soon as the department store door opens.

Usually, I sell more by discounting the price, but even if I say that I raise the price here, it seems that I sell more like this.

These days, there are many people who eat products that can be easily cooked and eaten, such as cup ramen or instant rice, and the Ministry of Food and Drug Safety asked you to carefully check the cooking methods and precautions.

Because foods that can be easily cooked and eaten, such as instant curry or simple porridge, are cooked differently depending on the type, you need to check whether it is for a bath or a microwave oven.

If you cook instant rice or dumplings in a sealed state, the product may burst, so you need to open the lid or packaging a little and cook.

When you have tuna, jangjorim, or canned fruit, it is better to transfer them to an airtight container and store them in the refrigerator.

This is because if you open the lid and store it, it can be contaminated with microorganisms.In particular, in the case of canned fruit with tin coated inside to prevent the fruit from turning brown, the coating reacts with oxygen to dissolve the tin component if left open. Do it.