The most optimistic did not expect that Real Madrid's return after a few days of defeats by two obscure teams (Cadiz and Shakhtar) at the expense of its great rivals Barcelona and at its Camp Nou as well. 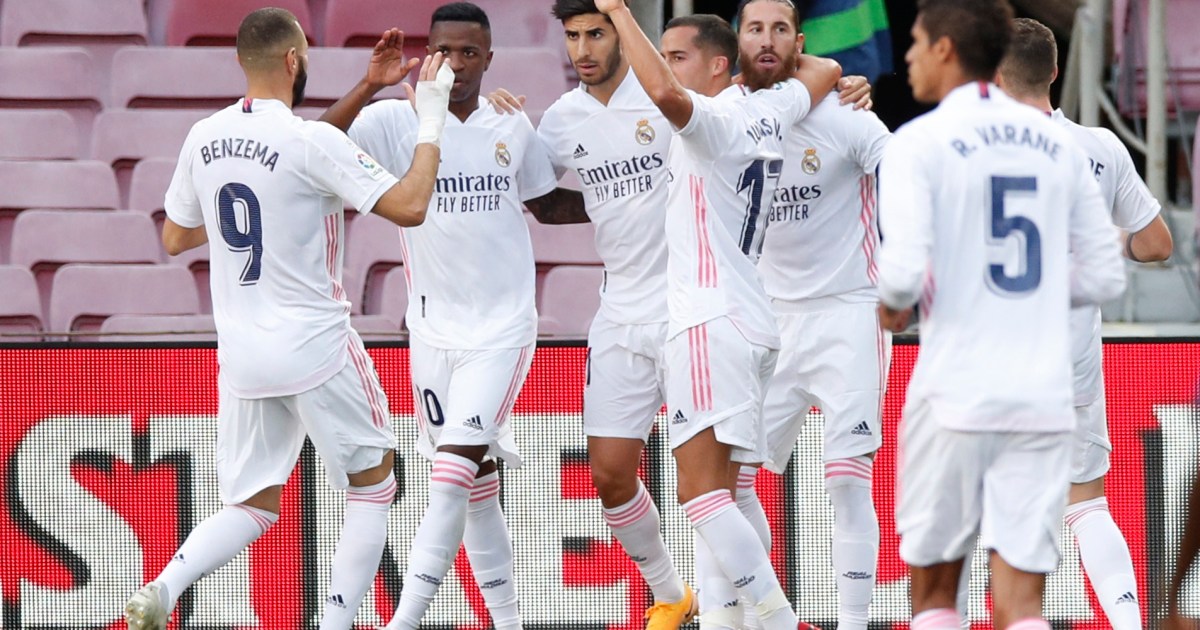 The most optimistic did not expect that Real Madrid's return after a few days of defeats by two obscure teams (Cadiz and Shakhtar) at the expense of its great rivals Barcelona and at its Camp Nou as well.

Real Madrid beat Barcelona 3-1 in the seventh round of the Spanish Football League, to lead the League with 13 points, and throw its rivals in the 12th place with only 7 points.

The first credit for Real Madrid's exit from the crisis that befell it after my defeat last week is to the royal coach Zinedine Zidane, who bet on his best players without experience or philosophy in the formation, where he employed the players in the best possible way, And he optimized the strengths of his strong opponent, and Zidane won his bet as well as his plan succeeded.

Summary of the fall of "Barcelona" in the Camp Nou Clasico in front of the "Royal" Real Madrid @realmadridarab with three 📺🍿 # ElClásico # LaLigaSantander pic.twitter.com/PhUtGg4tYt

In contrast to the previous two games against Cadiz and Shakhtar, Real Madrid players were the highest heels and the best in physical fitness from Barcelona, ​​which made the royal increase the dominance of the match over time until he ended it in his favor with an exciting three.

On the other hand, Barcelona's players could not keep up with their rivals, who appeared more energetic and energetic on the field.

El Clasico was the best possible scenario for an exit from the crisis, which could have destroyed the team this season if it had suffered a third defeat at the hands of Barcelona, ​​especially if it was heavy, which prompted the royal players to respond to Zidane's calls to possess the reins of play and pressure from the start, which came Early results, Federico Valverde scored the Real Madrid goal in the fifth minute, and even after Ansu Fati drew 3 minutes later, there was no impression of the Royal collapse, quite the opposite.

Courtois Courtois was one of the few players who performed well despite the last two defeats, and was particularly brilliant in front of Barcelona, ​​and his wonderful response to Barcelona star Lionel Messi's shot from close range in the first half and the score 1-1 was one of the main reasons for the royal victory.

Real Madrid also defended more coherently and tightly than the previous matches, and no player spared their effort in performing the defensive duty and the high pressure;

This closed the way for Barcelona to reach Courtois after Fati's goal.

4- The experience of the adults,

despite the criticism directed at them with every setback for Real Madrid, the great players on the front lines contributed their experience to settling the match in favor of the royal, and the veterans continued to make the difference, whether Karim Benzema or Toni Kroos or Luka Modric, who starred and scored a goal that will remain The memory of El Clásico matches has long been remembered because of his wonderful dribbling of the Barcelona goalkeeper before shooting the ball in the goal.

was leading the team towards victory from the moment he got on the bus until he left the field, which made Varane shine in the center of defense again.

Ramos did everything in the match, as he played his defensive role against Barcelona's stars to the fullest, and he also caused a penalty kick to score the second goal of Real, which was a decisive point in the royal victory in the match, and Ramos confirmed the saying that when he is not on the field, he collapses The team is just like in the previous two games.

explaining the players ’solidarity to save their coach from exposure to problems that could reach dismissal from his post in the event he received the third defeat after Kadesh and Shakhtar, and this was clearly demonstrated more than once, especially in Casemiro's embrace of Zizou after Modric's goal, followed by Varane, and clarified the extent of sincerity The players belong to their coach and their adherence to him, perhaps because of his gentle manner with them and his defense of them, and even the two previous defeats endured with all courage, despite their poor performance.

7 - Arbitration and the penalty kick

We cannot ignore the penalty kick from which Ramos scored the goal of progress, and which the Spanish press questioned, because there was a clear violation of Ramos immediately before it, and even accused the referee of "cooking it with Ramos", as it was a pivotal factor in changing the course of events in favor of Real, which affixes the saying that "arbitration is more and more favorable to Real Madrid."