What historical enlightenment did this expedition leave us 70 years ago?

Current Affairs News 丨 What historical enlightenment does this expedition leave us 70 years ago?   In this battle, everything went well and the country was peaceful. This battle brought out the spirit of the Chinese people. This battle made the whole world look at China with admiration... On October 23, a meeting to commemorate the 70th anniversary of the Chinese People's Volunteers’ mission to 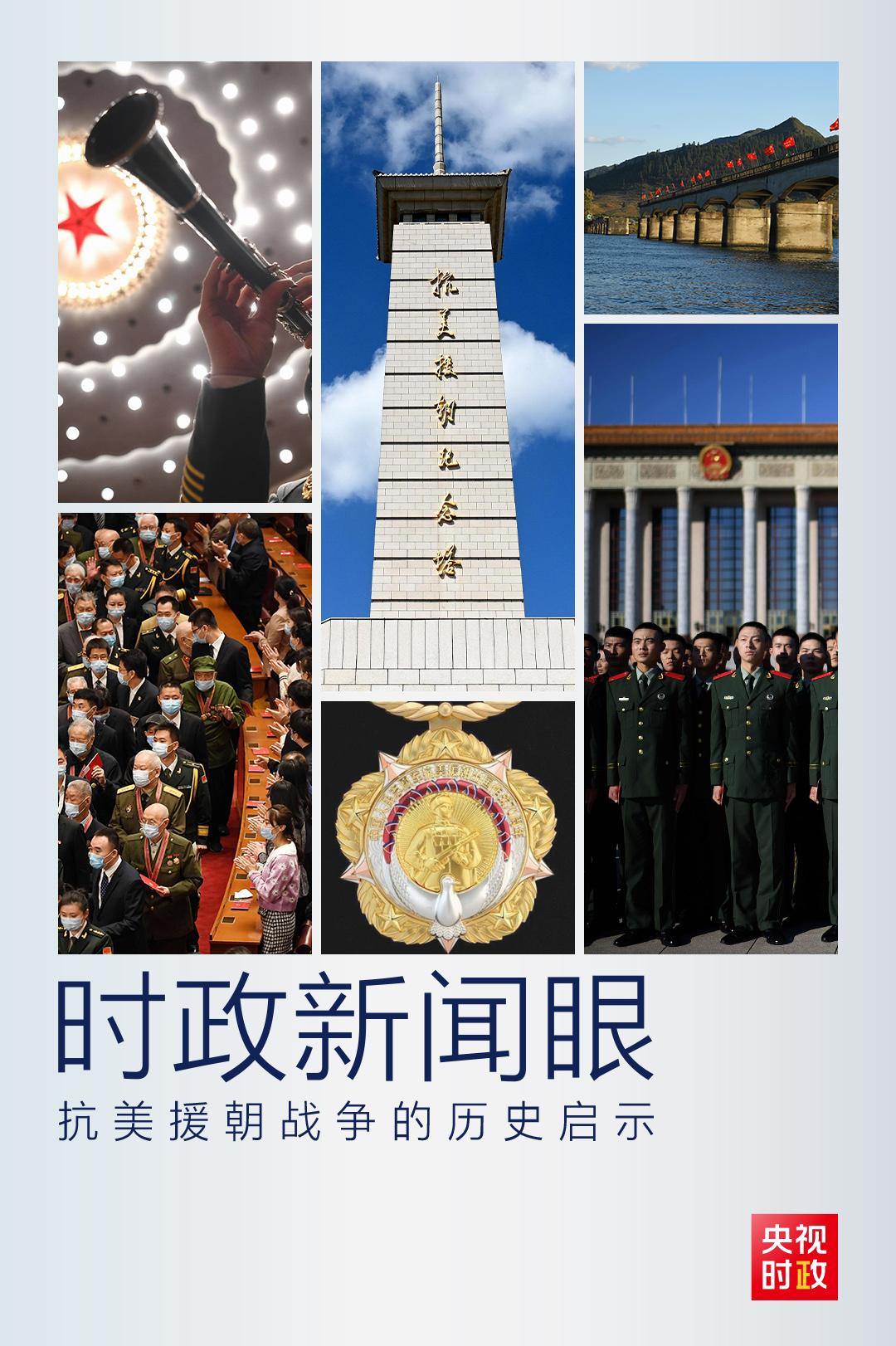 Current Affairs News 丨 What historical enlightenment does this expedition leave us 70 years ago?

In this battle, everything went well and the country was peaceful.

This battle brought out the spirit of the Chinese people.

This battle made the whole world look at China with admiration... On October 23, a meeting to commemorate the 70th anniversary of the Chinese People's Volunteers’ mission to resist US aggression and aid Korea was grandly held. Xi Jinping delivered an important speech at the meeting.

The great expedition 70 years ago left profound enlightenment for today.

Stars shine at the memorial meeting

On the morning of the 23rd, a meeting to commemorate the 70th anniversary of the Chinese People’s Volunteers’ mission to resist US aggression and aid Korea was held in the Great Hall of the People in Beijing. Leaders of the Xi Jinping Party and the country attended the meeting.

△At sunrise, the Great Hall of the People (Photo by Yang Xinyu and Peng Hanming, CCTV reporters from CCTV)

△The old heroes entered and took their seats one after another.

Li Yannian, who will turn 92 next month, is one of the representatives of the veterans.

He was also the winner of last year's "Republic Medal", when General Secretary Xi Jinping personally awarded him the medal.

In October 1951, Li Yannian served as the instructor of the 7th Company of a battalion of the Volunteer Army.

The battalion was ordered to counterattack a lost high ground.

Li Yannian recalled that he discovered that the enemy would launch a round of artillery attacks every 3 minutes or so. After mastering this law, he and his comrades used this gap to slowly touch them.

After fierce fighting, "the trees and thatch that hit the mountain are gone," and the high ground was finally taken back.

In the following year, Li Yannian was awarded the title of "First Class Hero" by the Volunteer Army Headquarters, and he was honored with merits.

Lin Qingsheng, 86 years old this year, won three third-class merits during the War to Resist US Aggression and Aid Korea.

In June 1953, during the battle for the 400 highland of the small mountain on the "38th Line" of North Korea, Lin Qingsheng, the radio director of the 95th Regiment of the 32nd Division of the 16th Army of the Volunteer Army, led the radio to actively request to join the war. He experienced deafening and deafening of his left ear. With shrapnel in his neck and multiple injuries to his body, Lin Qingsheng and his comrades eventually blew up the enemy bunker and occupied 400 highlands.

△Before the battle for the 400 Heights, Lin Qingsheng used candle oil to seal the "Certificate of Life and Death" in a pistol shell and sewed it into a corner of his pocket.

To this day, the cartridge case (bottom left in the picture) is still not opened.

△A photo of Lin Qingsheng during the battle for 400 Heights.

From awarding medals to presenting flower baskets, heroes are so revered

△The core part of the medal is the image of volunteer soldiers and 70 beams of light. It is surrounded by ribbons composed of peace doves, water patterns and national flags of China and North Korea.

On the same day, Xi Jinping met with representatives of medal winners and took a group photo with everyone before the memorial meeting.

Before the commemorative meeting on October 23, the ceremony of presenting flower baskets in the name of Xi Jinping, General Secretary of the CPC Central Committee, President of the State, and Chairman of the Central Military Commission was grandly held in China and North Korea.

△ The Martyrs' Cemetery in Shenyang, Liaoning Province, placed a flower basket in the name of Xi Jinping in front of the Martyrs Monument.

In the previous two days, on October 21, in the name of Xi Jinping, the ceremonies of offering flower baskets to the Pyongyang-China Friendship Tower and the Chinese People's Volunteers Cemetery in Hinoki were held successively.

On June 21 last year, during Xi Jinping's visit to North Korea, he specially visited the China-North Korea Friendship Tower built to commemorate the great achievements of the Chinese People's Volunteers.

At the memorial meeting, Xi Jinping revealed these historical revelations

△Before the start of the commemorative meeting, outside and inside the auditorium (photo by CCTV reporters Peng Hanming and Zhang Yu from CCTV)

Xi Jinping said at the commemorative meeting: "The great victory of the War to Resist US Aggression and Aid Korea once again proved that no political force like the Communist Party of China, for the sake of national rejuvenation and the happiness of the people, hesitated blood and sacrifices, worked tirelessly, and united hundreds of millions of people to continue to victory. "Keeping in mind the great victory and advancing the great cause, we must uphold the leadership of the Communist Party of China and forge the party stronger and stronger.

"The deepest root of the mighty power of war lies among the people." The War to Resist US Aggression and Aid Korea has let the world know that "now the Chinese people are organized and they are untouchable. If they are overthrown, it will be difficult to handle."

Learning from the past and knowing the future, China must insist on putting the people at the center, doing everything for the people, and relying on the people for everything.

The War to Resist US Aggression and Aid Korea was an extremely asymmetrical modernized war between two countries with vastly disparity in national strength. However, China won the nation-building war with one heart.

The war has shown a truth: backwardness must be beaten, and development can be self-reliant.

China must persist in advancing economic and social development and continuously strengthen its overall national strength.

△When the old hero enters the arena, everyone stands up and applauds.

The War to Resist US Aggression and Aid Korea was also a battle for the people's army.

The People's Army learns about war in war, and its combat power shocks the world.

The war revealed another truth: without a strong army, there can be no strong motherland.

China must coordinate development and security, enrich the country, and strengthen its military.

At the commemorative meeting on October 23, Xi Jinping emphasized: "We will never sit back and watch the damage to national sovereignty, security, and development interests, and will never allow anyone or any force to infringe or split the sacred territory of the motherland. Once such a serious situation occurs. Circumstances, the Chinese people will definitely give a head-on blow!"

The war to resist U.S. aggression and aid Korea once again proved that justice must prevail over power.

China must maintain world peace and justice and promote the building of a community with a shared future for mankind.

△After the commemorative meeting, the old heroes left the venue one after another.

Why did Xi Jinping continuously expound these three great spirits

At the commemorative meeting that day, Xi Jinping also profoundly expounded the spirit of resisting US aggression and aiding Korea.

spanned time and space and will last forever. It must be passed on forever and carried forward from generation to generation." This is the third consecutive time the General Secretary has expounded the great spirit in more than a month.

△ Zeng Jianhui, who attended the conference that day, went to North Korea for interviews during the War of Resist US Aid Korea.

This is the communication manuscript he is reading from that year.

They all attended the memorial meeting that day.

On September 3, at a symposium commemorating the 75th anniversary of the victory of the Chinese People’s War of Resistance Against Japanese Aggression and the World Anti-Fascist War, Xi Jinping said that the

, "is the precious spiritual wealth of the Chinese people. ".

Five days later, the General Secretary stated at the National Commendation Conference for Fighting the New Coronary Pneumonia Epidemic that in this desperate battle against the severe epidemic, the Chinese people and the Chinese nation have created life first, unity of the whole country, with the courage to fight and win. The

giving up life, respecting science, and

This spirit "is a vivid interpretation of the Chinese spirit."

Just last month, Xi Jinping expounded the value of spirit in this way: "A person cannot stand without a spirit, and a country without a spirit is not strong. Only when a nation can stand and stand firm in spirit can a nation stand in the torrent of history. , Stand upright."

Fell and arrogant, embark on a new journey.

This is the call of the motherland in the new era.