Controls in the nightlife area in Rome, three local sanctions

Over 350 people checked, 57 checks on commercial businesses - 3 of which sanctioned with suspension of activity - 6 people reported for theft 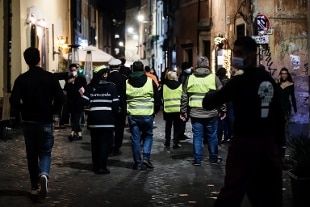 18 October 2020Maxi checks ordered by the Rome Police Headquarters at the nightlife of the Capital to verify compliance with anti-covid rules.

Over 350 people checked, 57 checks on commercial businesses - 3 of which sanctioned with suspension of activity - 6 people reported for theft.

354 people were checked: one was investigated in a state of freedom for the theft of a cell phone in the Trastevere district.

At Ponte Milvio 5 young Bosnian Serbs were investigated for aggravated theft and possession of tools suitable for burglary.

Reported a boy for drug use;

seized a few grams of cocaine, hashish and marijuana.

Two people were fined for not wearing the mask.

27 vehicles were also checked and an administrative fine was imposed on an illegal parking attendant.

57 commercial activities were also checked, to which fines of more than 800 euros were applied to a disco restaurant in Via Monte Testaccio.

The owner was sanctioned for violations of the anti covid-19 provisions, as the interpersonal distances between the patrons were not respected and the sanitation and sanitation of the environments was not ensured: provisional closure for 2 days was ordered.

In another restaurant in Via Monte Testaccio the owner was sanctioned because he continued the activity beyond 9 pm in the absence of drinks at the table and the provisional closure was ordered for 2 days.

A B&B in the Trastevere district was also sanctioned: the suspension of the activity was notified in application of Article 100 Tulps, also referring to some violations of the anti covi-19 provisions.