There are 330 million cardiovascular patients in China. How many of these bad habits do you account for?

Chinanews client, Beijing, September 29 (Reporter Zhang Ni) Recently, the sudden death of a passenger on the Beijing subway has attracted public attention. Statistics from the National Cardiovascular Center in 2019 show that there are 550,000 sudden cardiac deaths in China each year. According to the data, the number of current cardiovascular disease patients in China has reached 330 million. 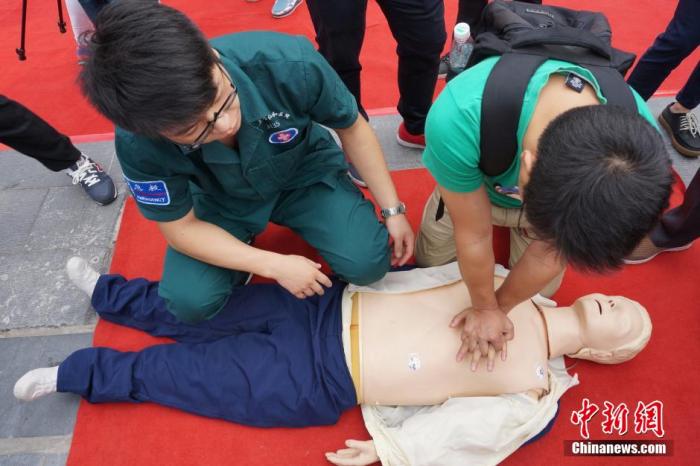 Statistics from the National Cardiovascular Center in 2019 show that there are 550,000 sudden cardiac deaths in China each year. According to the data, the number of current cardiovascular disease patients in China has reached 330 million.

How much do you know about heart health?

The current number of cardiovascular diseases in China reaches 330 million

In 2019, "The Lancet" published such a study-after analyzing the causes of death of Chinese residents from 1990 to 2017, it was found that the first mortality rate was stroke, followed by ischemia. Heart disease, lung cancer is the third.

The study also shows that the death rate of cardiovascular disease in rural areas has exceeded and continued to be higher than the urban level since 2009.

The "China Cardiovascular Disease Health and Disease Report 2019" emphasized that at present, cardiovascular deaths account for the first cause of death among urban and rural residents, 45.91% in rural areas and 43.56% in urban areas.

The "Report" stated that with the development of social economy, the people's lifestyle has undergone profound changes.

Especially with the aging of the population and the acceleration of the process of urbanization, the prevalence of cardiovascular risk factors in China is obvious, leading to the continuous increase in the number of cardiovascular diseases.

The number of cardiovascular patients will continue to grow rapidly in the next 10 years.

How many of these risk factors do you account for?

Studies have shown that hypertension, dyslipidemia, diabetes, obesity, smoking, lack of physical activity, and unhealthy eating habits are the main risk factors for cardiovascular and cerebrovascular diseases that can be changed.

Earlier, Gao Runlin, an academician of the Chinese Academy of Engineering and a professor at Fuwai Hospital of the Chinese Academy of Medical Sciences, issued a reminder in conjunction with the "China Cardiovascular Health and Disease Report 2019": tobacco use, reasonable diet, physical activity, overweight and obesity, health and psychology, etc. As the main influencing factor of Chinese people's cardiovascular health, it will be paid special attention.

The above-mentioned "Report" shows that from 1992 to 2012, the dietary structure of Chinese residents changed significantly.

However, corresponding to this, the overall physical activity level of Chinese people has declined, and overweight and obesity have increased.

From 1991 to the present, the total physical activity of adults has dropped by nearly half.

Gao Runlin emphasized that studies have confirmed that obesity, overweight and insufficient exercise are high-risk factors for cardiovascular diseases. The unoptimistic trends revealed in the "Report" suggest that people should develop a more active and healthy lifestyle in terms of eating habits and physical activity.

The harm of smoking to the heart cannot be ignored

In addition to eating habits, factors such as smoking and depression also increase the risk of heart disease.

Studies have shown that the prevalence of depression in Chinese patients with acute myocardial infarction is 21.66%, which is significantly higher than the 10.36% of healthy people.

On the 22nd of this month, the World Health Organization, the World Heart Federation and the University of Newcastle in Australia have jointly issued a report showing that 1.9 million people worldwide die of heart disease caused by tobacco each year.

This number has increased by more than 200,000 in just two decades.

The report warned that one-fifth of heart disease deaths are caused by tobacco. It urges all smokers to quit smoking to avoid heart attacks, and emphasizes that smokers are more likely to develop acute cardiovascular diseases than non-smokers.

Although from 2010 to 2018, the smoking rate of people aged 15 and over in China has been on a downward trend, tobacco control still needs to be strengthened.

To prevent cardiovascular and cerebrovascular diseases, you need to understand these!

The prevention and treatment of cardiovascular and cerebrovascular diseases is not only related to personal health, but also to the strategic level of healthy China.

As individuals, how can we prevent such diseases?

It is recommended that people with high blood pressure (120～139 mmHg/80～89 mmHg) pay attention to control the above risk factors as soon as possible.

Patients with high blood pressure should learn to manage their own health, take medication carefully according to doctor's advice, measure blood pressure frequently and follow-up visits.

It is recommended that people at high risk of hypertension and patients pay attention to the intake of dietary salt, the daily salt intake should not exceed 5g, and abstain from alcohol, reduce the intake of foods rich in fat and sugar, and limit the consumption of cooking oil.

People at high risk of cardiovascular and cerebrovascular diseases are tested for blood lipids every 6 months.

——Prevent the occurrence of stroke

There is a clear correlation between dyslipidemia and the incidence of ischemic stroke.

Atrial fibrillation is an important cause of ischemic stroke.

It is recommended that patients with atrial fibrillation take anticoagulation therapy as directed by their doctor.

The painful parts of acute myocardial infarction (precordial area, posterior sternum, under the xiphoid process, left shoulder, etc.) are the same as angina, but the duration is longer, the severity is severe, and may be accompanied by symptoms such as nausea, vomiting, and sweating. Absolutely rest in bed, loosen your neckline, and keep the room quiet and ventilated.

Those who have the conditions can take oxygen immediately, take 1 tablet of nitroglycerin under the tongue, and call the emergency center immediately. Never take a bus or walk the patient to the hospital.

The onset of early stroke is characterized by sudden weakness or numbness in one limb, sudden slurred speech or incomprehension of other people’s speech, sudden rotation of vision, inability to stand, transient visual impairment, black eyes, blurred vision, difficulty in appearance The headache that he endured has gradually worsened or continued, accompanied by nausea and vomiting.

When this happens, the patient should be placed flat, supine, without pillows, head tilted to one side, and pay attention to keep the patient warm.

At the same time, call the emergency number immediately and try to reach the hospital as quickly as possible.