The Yemeni army is advancing on the fronts of Ma'rib and Al-Jawf ... and clashes in Al-Bayda

The Yemeni army forces and the tribes, backed by the Arab coalition, continued their advances on the southern and western fronts of the Ma'rib governorate, with the renewed confrontations between Al-Zahir's resistance in Al-Bayda and the Houthi militia in the Al-Hamikan front, and while the confrontations continued north of Al-Dhalea, and the violations in the western coast, 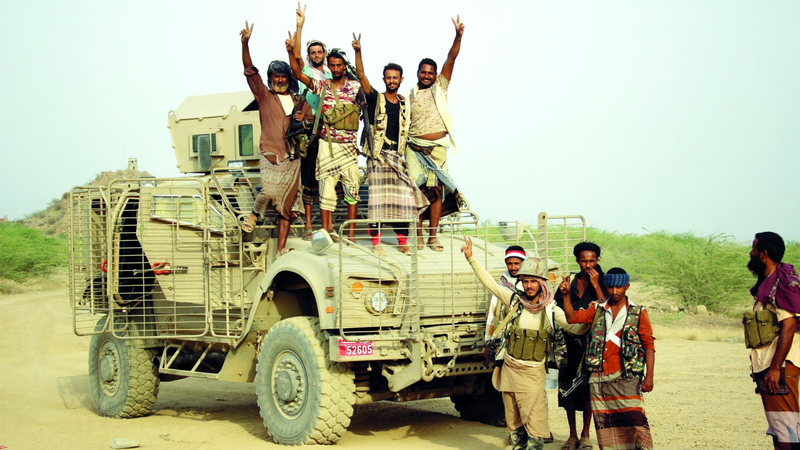 The Yemeni army is advancing on the fronts of Ma'rib and Al-Jawf ... and clashes in Al-Bayda

A group of Yemeni legitimate forces in one of the regions of Taiz.

The Yemeni army forces and the tribes, backed by the Arab coalition, continued their advances on the southern and western fronts of the Ma'rib governorate, with the renewed confrontations between the resistance of Al-Zahir in Al-Bayda and the Houthi militia in the Al-Hamikan front, and while the confrontations continued in the north of Al-Dhalea, and the violations in the western coast, the militias committed a new crime against the sons of Taiz.

In the details, the Yemeni army forces and the tribes were able to secure positions in the vicinity of the Gereida mountain range in the Rahba district, after securing the areas that the Houthi militia members tried to advance to in the Jabal Murad district, which witnessed the most violent battles between the two sides yesterday evening, which led to the death 17 Houthis, and wounding others, along with the families of six Houthi fighters.

Field sources stated that the army and tribes had regained strategic locations in the Rahba district, and continued to pursue Houthi fighters who fled from several locations, after incurring heavy losses among their members and field leaders, which exceeded 1000 dead and wounded, along with 46 families, including field leaders, since the beginning of this month. .

Meanwhile, the army and tribes forces managed to shoot down a Houthi drone in the sky of Al-Zour village in the Sarwah district, west of the Ma'rib governorate, which was carrying out filming and reconnaissance operations in front of Houthi reinforcements sent from Sana'a to a narcotic front, before the coalition fighters dealt with and destroy it, which led to the destruction of the vehicles And the death and injury of Houthi elements.

The coalition fighters also launched a series of raids on Houthi sites and combat vehicles in the Madghal district, north of Ma'rib, and another on the Majzar district on the outskirts of the capital's countryside front from the Nehm side, as well as targeting Houthi vehicles in the Haradh district of Hajjah governorate, and another in the Al Saifi area in the Sahar district in the governorate. Saada, a direct hit detective.

In Al-Jawf, the army and tribes' forces continued their advance on the southern and eastern fronts of Bir Al-Marazeeq and east of the city of Al Hazm, the capital of the governorate, and the desert of Khub and Al Sha`f, with the great support of the coalition fighters that targeted Houthi reinforcements in Khub Washa`f, and prevented their access to the seam areas in the vicinity of the Nudd.

In Nehm, northeast of the capital, Sana'a, the army and tribes ambushed a convoy of Houthi vehicles at the Salb Mountains front, destroying a number of them, and killing and wounding Houthi elements.

In Al-Bayda, confrontations were renewed between the local resistance in the Al-Zahir District, centered on the Al-Hamiqan front, which targeted Houthi sites in Dhahwa, Al-Jamajm, Waheed Al-Malah, Sawda Ghurab, Al-Ghoul, and Al-Qawaa, which led to the killing of six Houthis and wounding others, including a field commander.

In the district of Dhi Na'im, the local resistance managed to set a tight ambush for the Houthi fighters in the Al-Taffah area, and they clashed with it, which led to the death of the Houthi leader, called "Abootah."

On the same level, the Houthi leader, Ali Yahya, was killed by gunmen from the Al-Jawf tribe in a case that erupted, against the background of the killing of the Hamikan prisoners by his brother.

In Hodeidah, on the western coast, the Houthi militia targeted Al-Duraihimi Hospital as part of its daily breaches of the truce, and the series of targeting medical and educational facilities, mosques and industrial areas, which led to injuries among patients and the medical staff in the hospital.

It also targeted Al-Kifah School, located between the villages of Shaab Bani Zuhair and Al-Haminieh, in the northwest of the Hais District, preceded by the targeting of the Red Sea Mills early last week, in a remarkable escalation of its crimes against civilians on the western coast.

In Taiz, the Houthi militia committed a new crime against civilians by targeting a gathering area to collect water in the east of the city, which left dead and wounded among children and women, according to local sources, indicating that the Houthi artillery stationed in Tabat Sofitel, east of the city, targeted the neighborhoods of Al-Jahmiliya, the water project, Al-Arradi and the basin. Al-Ashraf and Al-Mohafazah neighborhood, resulting in the death of a woman and the injury of 11 civilians, including four children who were gathered around the water project.