The fall of a phone scam gang in Sharjah

Sharjah Police succeeded in arresting a fraudulent gang comprising nine (Asian) people, who specialized in defrauding their victims through fake messages. The Al Dhaid Comprehensive Police Station in the Central District Police Department received a report stating that a person had been defrauded by an unknown person who called him and deluded him that he was Officer 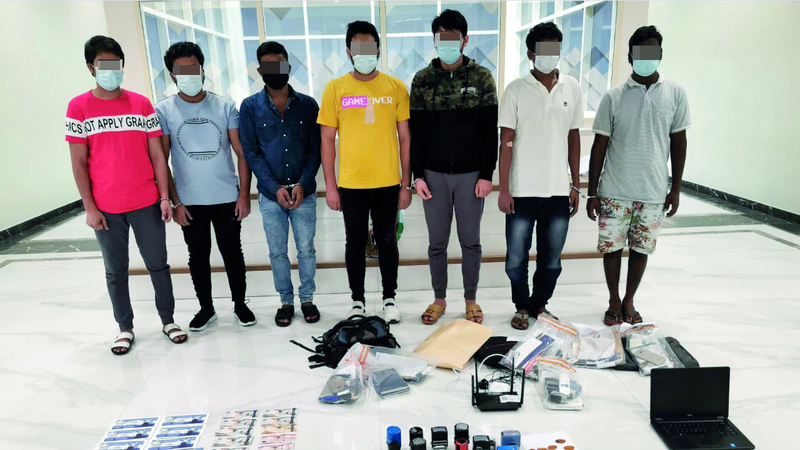 The fall of a phone scam gang in Sharjah

Seven gang members have seizures in front of them.

Sharjah Police have succeeded in arresting a fraudulent gang of nine (Asian) telephone people, who specialize in defrauding their victims through fake messages.

The Dhaid Comprehensive Police Station in the Central District Police Department had received a report stating that a person had been defrauded by an unknown person who called him, and deluded him as an employee of a bank and wanted to update his data, which enabled him to penetrate his bank accounts and withdraw 96,000 dirhams from his balance.

The Acting Director of the Central Region Police Department, Colonel Hamad Al-Riyami, stated that the Criminal Investigation Department has worked to form a team to track down the perpetrators and infer their identity, because of the danger they pose to persons, companies, bank accounts and individual credit cards, and take all legal measures.

He added that the investigators were able to arrest the perpetrators within a short time, and it turned out that they were a gang consisting of nine people, holding the nationalities of Asian countries, who specialized in this type of fraud, as they intended to send false messages to dealers, or by phone, and inform them of the need to renew Account data, or suspension of banking services at the bank, in addition to freezing the account, and the inability to withdraw salaries, so that they can deceive the dealers, and thus the account holder does what they ask him to do, so they transfer the balances from the victim’s accounts to other accounts in other banks, and from Then send it abroad.

Al-Riyami stated that he found in possession of the perpetrators when they were caught, a number of smartphones and chips, bearing numbers for some telecommunications companies operating in the country, and a large group of receipts for remittances, and other papers showing the method of fraud, printed in Arabic and English, in addition to sums of money seized from Their suspicious operations.

He called for not to pay attention to messages or misleading communications, and to report any crime or suspicion.