During his inspection tour in Shanghai, Li Keqiang emphasized to promote reform and opening up, promote innovation and development, further stabilize employment and consolidate the foundation for economic recovery   From September 21 to 22, Li Keqiang, member of the Standing Committee of the Political Bureau of the CPC Central Committee and Premier of the State Council, inspected Shanghai accompa 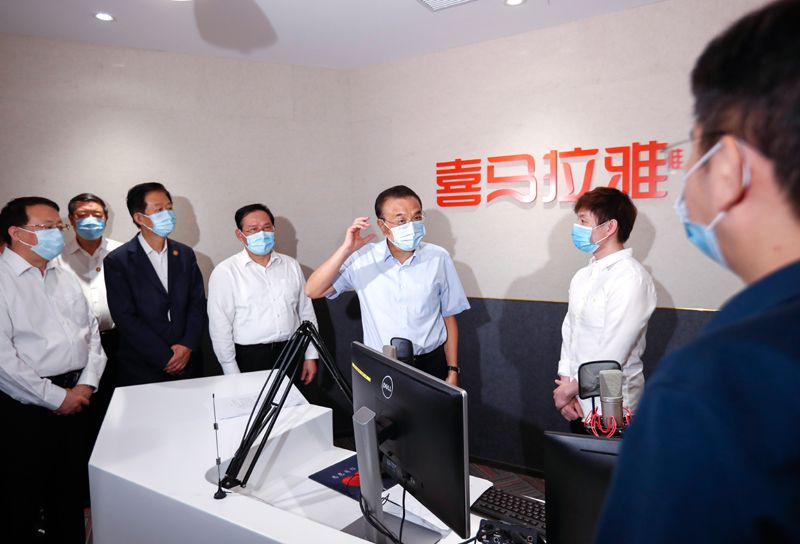 During his inspection tour in Shanghai, Li Keqiang emphasized to

promote reform and opening up, promote innovation and development,

further stabilize employment and consolidate the foundation for economic recovery

In the Himalaya company, the person in charge of the company introduced that relying on the Internet to bring together tens of millions of creators to carry out online double innovation, the audio content developed to serve more than 600 million users.

He said that the use of modern technology to develop diversified audio products and create a huge consumer market can drive a large number of jobs and enrich people's lives.

I hope you will make your platform better and help more creators and listeners climb the peak of a colorful life.

Li Keqiang came to the Shanghai Free Trade Zone to listen to reports on the achievements of Pudong’s development and opening up, new breakthroughs in the reform and development of the Free Trade Zone, and Shanghai’s deepening of the reform of decentralization, management, service, and optimization of government services.

He hoped that Shanghai will adhere to Xi Jinping’s new era of socialism with Chinese characteristics as its guidance, continue to take the lead in reform and opening up, and set a higher standard.

Li Keqiang inspected SIAP China Research Institute, a foreign-funded enterprise in the free trade zone, and talked with Chinese and foreign engineers to understand the cooperation with Chinese manufacturing enterprises.

He emphasized that it is necessary to rely on the Industrial Internet to vigorously develop services for the manufacturing industry, deepen open cooperation, promote the quality and upgrade of China's manufacturing, stabilize and strengthen the industrial chain supply chain, and cultivate new drivers of development.

Li Keqiang has always been concerned about employment. He came to 51job.com, which provides employment services, and asked in detail about the employment market situation, salary changes, and employment of college graduates.

He said that employment is the biggest livelihood of the people, and to stabilize the economic fundamentals, we must give priority to stable employment.

He encouraged employees to further improve employment services so that more job seekers have employment opportunities.

Li Keqiang held a symposium on financial support for the real economy at the Bank of Communications to listen to the opinions and suggestions of local, financial institutions, and small and micro enterprises.

He said that the financial system has played an important role in economic recovery.

We must continue to maintain the reasonable strength of financial support policies for the real economy, promote service innovation, and expand inclusive finance.

This year, consumption has been severely impacted by the epidemic.

Li Keqiang came to Nanjing Road at night to inspect the recovery of commerce and consumption.

Businesses report that the market is gradually picking up.

Li Keqiang said that although consumption has changed from a decline to an increase, it still needs a process to achieve normal growth.

He came to the Qian Xuesen Library to watch the display of the school's scientific research results, and had in-depth exchanges with academicians and professors on removing obstacles restricting the vitality of technological innovation.

He encouraged college students to inherit the spirit of innovation and use their creations to contribute to the country and society in the future.

Li Keqiang fully affirmed Shanghai's achievements in epidemic prevention and control and economic and social development. He hoped that under the strong leadership of the Party Central Committee with Comrade Xi Jinping at the core, in accordance with the deployment of the Party Central Committee and the State Council, we will continue to innovate and continue to deepen reform and opening up and promote high-quality development. At the forefront.

Xiao Jie and He Lifeng accompanied the inspection.