At the UN, Erdogan offers a regional conference on the conflict in the Mediterranean

During his remote address to the UN, Turkish President Recep Tayyip Erdogan proposed, Tuesday, the holding of a regional conference on territorial disputes in the Eastern Mediterranean, ... 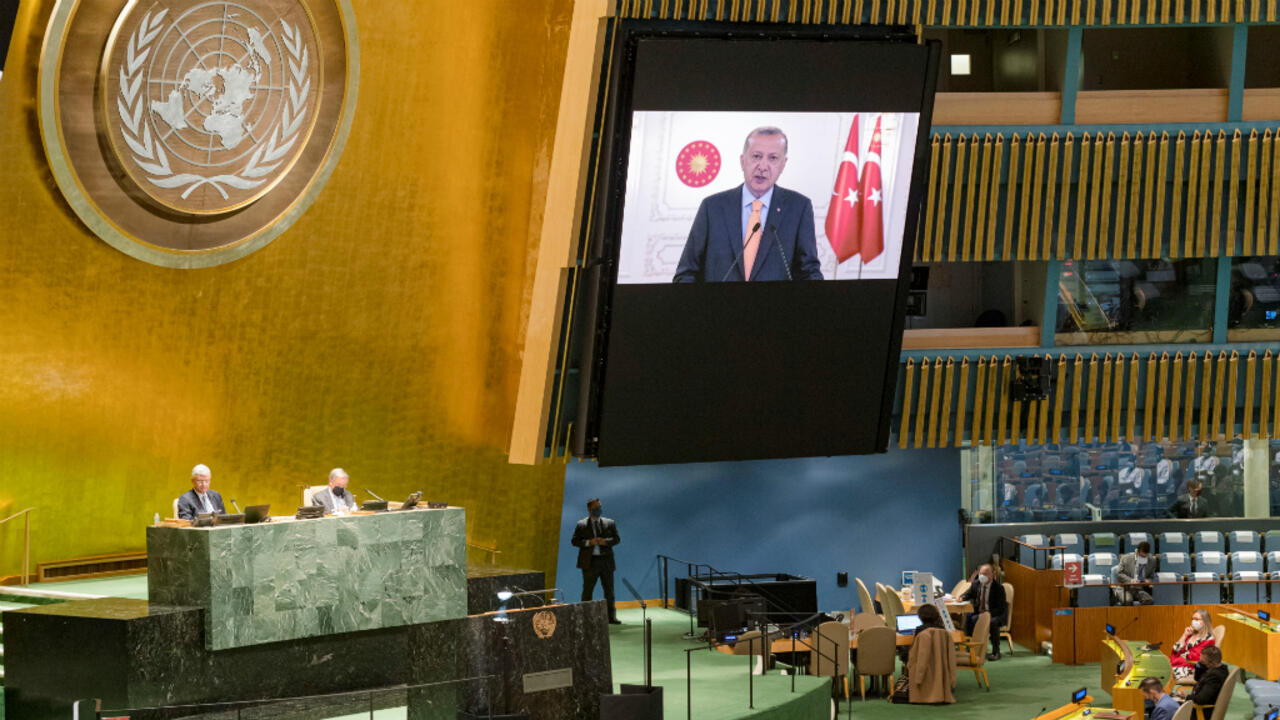 A call for dialogue in a context of strong tensions.

Speaking from a distance before the United Nations General Assembly, the Turkish leader proposed, Tuesday, September 22, the organization of a conference to resolve territorial disputes in the Mediterranean between Turkey and several European states.

Recep Tayyip Erdogan has expressed a desire to resolve disagreements "fairly and appropriately" through dialogue, but warned that "futile" attempts to exclude his country from plans for the eastern Mediterranean would be doomed to failure.

"I would like to renew my call for dialogue and cooperation between the coastal States of the Mediterranean. We therefore propose the holding of a regional conference where the rights and interests of all the coastal States will be taken into account", he added. he says.

Recep Tayyip Erdogan asked in passing that the Turkish Republic of Northern Cyprus, only recognized by Ankara, be associated with this conference.

The Turkish presidency had announced earlier that Ankara and Athens had agreed to resume exploratory discussions on the territorial dispute between them in the Eastern Mediterranean and the Aegean Sea in the near future.

The Turkish leader expressed hope that the European summit initially scheduled for Thursday and Friday, but rescheduled for October 1 and 2 (Charles Michel, the president of the European Council, to remain in isolation after being in contact with a positive person coronavirus) would give new impetus to relations between Turkey and the European Union.

He hopes for concrete measures, such as updating the customs union, the possibility of traveling without a visa, or even taking into account the migration issue, which, he added, would make it possible to start again on a positive basis.

Emmanuel Macron ready for a dialogue, without "intimidation"

Turkey last week withdrew the Oruc Reis, an oil exploration vessel, from disputed waters of the eastern Mediterranean in order to facilitate diplomatic efforts with Greece.

Athens hailed a first positive step to ease tensions around the region's hydrocarbon resources, some areas of which are claimed by the two countries.

Tensions between the two countries have worsened since the arrival in August of Oruç Reis in this disputed area claimed by Greece, Cyprus and Turkey.

Greece, France and Italy recently carried out military maneuvers in this sector.

Speaking also by video link to the United Nations General Assembly, Emmanuel Macron said he was "ready for dialogue" with Turkey but added that Ankara must respect European sovereignty and international law, but also clarify its action in Libya and Syria.

"We Europeans are ready for dialogue, for the essential construction of a Pax Mediterranea, but not at the cost of intimidation, not at the cost of the logic of the strongest, with respect for international law, cooperation and respect among allies, ”he said.

"These principles are non-negotiable."

The Turkish presidency subsequently announced that Emmanuel Macron and Recep Tayyip Erdogan had spoken by telephone.

According to her, the Turkish president wanted France to adopt a constructive approach to defuse tensions and stressed the need to seize diplomatic overtures.

The Élysée indicates for its part that the Head of State "recalled his constant readiness for dialogue and the interest he attaches to a solid relationship between the European Union and Turkey, on a clear and respectful basis. interests of each. "

"In this regard, he called on Turkey to fully respect the sovereignty of the Member States of the European Union as well as international law, to refrain from any further unilateral action likely to cause tensions, and to engage without ambiguity in the construction of an area of ​​peace and cooperation in the Mediterranean ", continues the presidency in a press release.

"He also called on Turkey to fully respect the arms embargo in Libya within the framework defined by the United Nations, as well as the security interests of its allies in Syria," she added.